I was in Fort Worth looking at art, so naturally I went to the Fort Worth Modern in its beautiful, austere Tadao Ando palace. Then I walked across the street to the Kimbell Art Museum with its lovely, rhythmic  Louis Kahn vaults and saw a show of Bernini clay statues. My GPS device showed that Brand 10 Art Space was just a couple of blocks away, right in the same art district. I quickly found it.

Brand 10 Art Space is in a strip mall. And this weird fact turns out to be totally appropriate for their current show Stuffed by Hillerbrand+Magsamen, whose work deals with aspects of suburban family life and in this show in particular, the accumulation of stuff that occurs in a suburban home.

(It's absolutely necessary for me to insert a disclaimer here. I not only own a Hillerbrand+Magsamen piece, I own one from this very show--specifically one of the Comfort tapestries.)

This show documents their family's accumulation of stuff, and by extension the culture we live in that encourages this sort of acquisition. Stephan Hillerbrand and Mary Magsamen have a young son and daughter, and a lot of the stuff they accumulate is kid stuff--plastic toys, stuffed animals, clothes. And young kids have a tendency to expand their stuff to fill every possible bit of space. (I should add that 49-year-old bloggers have the same tendency.) I don't have kids, but my brother's family stayed with me for a couple of months last summer, and even in that short period of time, a layer of little toys gradually spread to every corner of my house like a river's alluvial deposits. It was like a geologic process in super-fast time. That process may have inspired the floor piece Hillerbrand+Magsamen included in the show. 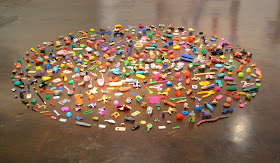 When I saw untitled, I thought of Richard Long and his circles of slate. Long addresses geologic time with such work (slate is a metamorphic rock formed from shale, which is sedimentary), and by analogy Hillerbrand-Magsamen are addressing "mess time". They told me they could have literally filled the gallery with these little plastic geegaws. But making a circle out them is more elegant, and circles suggest infinity. 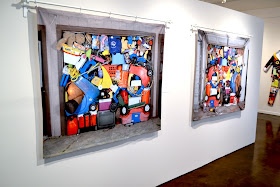 The Comfort series involves taking everything in a given room (for example, all the stuff in their garage), building a wall of the stuff in that room and then photographing it. But the process doesn't stop there--the photograph is then taken to Walmart, who will print your photos onto polar fleece material. I had no idea that this service was available. It's an excellent way to display these photos, because in order to do so, you have to go to Walmart, the platonic ideal delivery system for cheap plastic suburban stuff, and get one more piece of stuff made. (Five more, actually--each of these is an edition of five.)

The word "comfort"  refers to the blankets. The idea of wrapping yourself up in a warm blanket, or Linus and his security blanket from Peanuts come to mind. But the walls of stuff are about comfort as well--we buy things to make ourselves feel better. A wall makes us feel safer. The accumulation of things wards of death. I would argue that the ultimate consumers in modern capitalist America are the so-called "doomers," people who prepare for the collapse of civilization due to any number of factors (climate change, race wars, economic collapse, peak oil, the second coming, Obama--they choose a doom based on their own ideology). Such preparations inherently involve building a bunker and stocking it with stuff--guns, ammo, canned food, freeze-dried food, survival gadgets, etc. They spend ten of thousands of dollars to prepare for a day when money no longer has meaning and death haunts the land. But we are all doomers in a way--spending our way out of obsolescence and unhappiness, cocooning ourselves in the warm embrace of new stuff.

The cycle of stuff doesn't end with producing the polar fleece representations. Once they had made these polar fleece monuments to suburban accumulation, they cut them up and made clothes out of them. 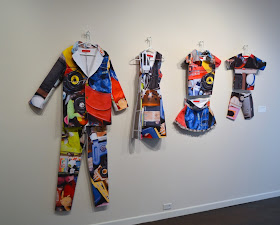 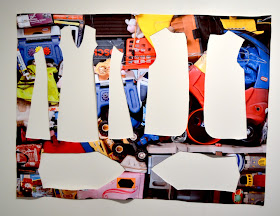 These clothes are an Ode to Beuys in that they obviously reflect Joseph Beuy's own felt suit. The (dubious) mythology around Beuys is that he was wrapped with felt and fat when he was rescued by Tatars after crashing in a dive bomber in Russia during World War II. Felt therefore represented rescue and  salvation for Beuys. In Comfort: Ode to Beuys, it represents comfort, but also safety--not safety in a literal sense, but the psychological sense of safety and completeness we get from acquiring stuff. Jesus may have preached that one should leave all this stuff behind, but there is a reason that the "prosperity gospel" appeals so strongly to suburban America. Having stuff is important to us. These clothes reflect that.

Hillerbrand+Magsamen's art is both bourgeois and a critique of being bourgeois. As a document of their family's lifestyle, it is a picture of suburban plenty. And in a way, that is unusual. I remember reading an essay about writer William Trevor where the author said that the bohemianism of Allen Ginsberg (for example) was what you expected. You imagine an artist will not be a homme moyen sensuel. For this author, the very ordinariness of William Trevor was, in the context of artists, highly exotic.

(I want to emphasize that I know nothing of the actual lifestyle of the Hillerbrand+Magsamen family beyond what they chosen to depict in their artwork. So when I use descriptive words like "bourgeois" or "suburban," it's really about the work itself.)

By creating art like this seemingly from within this world--suburban, acquisitive, bourgeois--Hillerbrand+Magsamen are better placed to understand that world. Their critiques are gentle and not savage, but carry more weight than they would if they were coming from a place wholly outside the world of modern suburban America. Their work demonstrates a knowledge of art and an equal knowledge of Happy Meals, and is expressed with real humor.

Stuffed is up at Brand 10 Art Space through March 23.