These days you can't escape the c-word. Every bodies using it and everybody's doing it. Celebrities. Students. CEOs. Some call it hosting. Some call it DJ-ing. But now even the institutions that are entrusted with the responsibility of it are shining a light on their c-ing.

The CAM is the latest to do so. On February 7, 2013, it's Slide Jam series featured curators Sally Frater and Kimberli Gant. That's right. You heard me use the c-word, curators. The CAM used the program that it created to curate (and thus highlight) emerging artist in Houston to highlight the work of its profession through two regional curators. 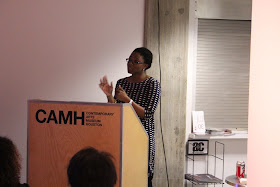 I thought it a little odd to use one of these sessions for curators (who after all create the series) to focus on curators. In his opening remarks, one of the CAM's curators, Dean Daderko credited/blamed/pimped out Jamal Cyrus, who is officially the CAM's Education Associate/Teen Council Coordinator, as being the originator of this show. So at least on paper, it doesn't look quite as incestuous as it might sound, a coordinator curating curators rather than curators curating curators. 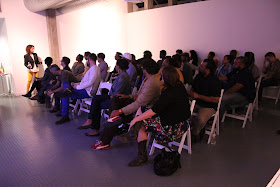 A photo that could easily qualify for the blog Art From Behind. More artists and writers than you could shake a oil paintstick at.

I must admit that I attended the show full of skepticism (can you tell) because a curated series curating a show of curators sounded about as exciting and insightful as an art blog on the sexy, intrigue-filled world of art bloggers.

However, my interest had been peaked by a comment made by the writer and recent Creative Capital|Warhol Foundation Arts Writers Grant, Harbeer Sandhu, who wrote in a Facebook post on January 2013,

I'm surprised that this gem from 1989 still holds true--that was a time when all the kids were trading in their guitars for turntables and mixers. So what is with all the "celebrity" DJ-ing that is still going on? Some time back I tweeted CURATING IS THE NEW CREATIVITY, and I intend to blog about this when I get my art blog up and running. It's like every jackass out there wants to be a "curator." ...

Experts say that with the information glut the internet has brought us, we are moving on from a phase where SEARCH was the most important function to a period where FILTERing will be more important. This is why we love aggregating sites like HuffPo and Boing Boing, my FB page, etc, because they scour the internet and deliver you the gems. I think this is related to the rise of curating and "celebrity" DJing (what is a DJ but a music curator?)

This post takes its title from the lyrics of De La Soul's The Magic Number and it begs the question if everybody want to be a DJ/producer/curator/or human filter, what does a curator do and how does s/he view his/her work?

It turns out that curating, as Sandhu alludes to, is primarily an act of education. The slam turned into a presentation of each curator's resume. Frater spoke first on the subject and Gant backed her up during her presentation.

Frater is currently a Core Critical Studies Fellow at the Glassell School at the Museum of Fine Arts, Houston. She holds an Honors BA in Studio Art from the University of Guelph and an MA (with Distinction) in Contemporary Art from The University of Manchester and Sotheby's Institute of Art.

She started out pursuing a career as an artist. She found herself drawn to curating as a consequence of her strong desire to explore and discover how other artist were addressing issues such as the Rwandan genocide, post-colonialism and post-globalism, media and its treatment of marginalized communities, homophobia, AIDS, and psychopaths, and others topics. Basically, she educated herself and then turned to share both what she learned and what she'd been exposed to to others so that they could experience and engage the subjects for themselves.

Both qualified that their mission as curator was not education in a parochial sense but education as exposure. They don't view their jobs as defining art in an if-you-see-a-white-dove-in-European context is means 'peace', but rather as an act of introduction and exposure. 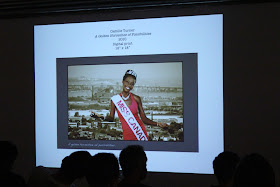 A piece from one of the Frater's curated shows.

Kimberli Gant is getting her doctorate at UT Austin. She put in her time as the Curator of Exhibitions and Public Programs at the Museum of Contemporary African Diasporan Art (MoCADA) in New York and more recently as the Mercer Graduate Curatorial Fellow at AMOA-Arthouse, Austin, Texas.

Gant spoke most of the challenges she faced working as curator of MoCADA. 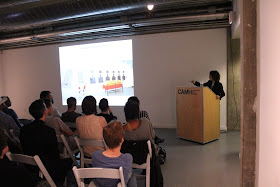 Gant discussed the challenge of curating for an audience that wasn't steeped in the New York art scene. She had to present exhibits that challenged the community that the museum served without alienating them. After all, no money, no art, no museum. At the time, she held some unorthodox events at the museum (such as renting it out for private parties) in order to get people into the museum and expose them to what it had to offer. 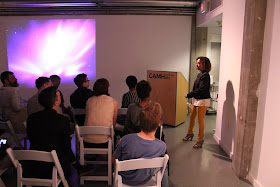 The Q&A session queried both curators about the challenges of working within constraints but being not impeded by them. They both acknowledged the limitations but found some solace in the fact that those constraints also worked as provided boundaries. Frater added that she found people respond to works by compressing, simplifying, flattening works so that they can digest them. In both Frater and Gant's practices, they seem to always be aware of that fact and constantly working against it because...

Postscript
I couldn't find links to sites that listed their entire curatorial resumes. However, I did find an interview with Frater on a show she curated at the Glassell and a profile of Gant on ArtSlant.