In the Studio with Alissa Blumenthal 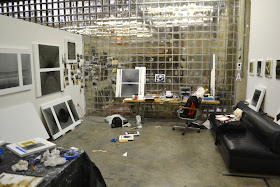 After I discussed some of her paintings from the Core program show, I got an invite from Tatiana Istomina to visit her study where she produces paintings by "Alissa Blumenthal." I had never visited a Core studio, so I was quite eager. Long and thin, it seemed functional and less grungy than some studios I've seen. I guess the glass bricks are handy if you like to work with natural light. We settled in to talk as I tried to take it all in. I'm not a polite interlocutor when I'm surrounded by art--my eyes keep wandering. And this is especially true in an environment full of work like this that I find fascinating. 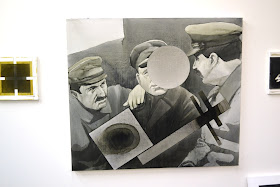 I didn't turn on the recorder on my phone--I wanted the conversation to be natural and unforced. (I also hate transcribing.) So this is all from my own imperfect memory. I wanted to discuss Alissa Blumenthal with Istomina. Blumenthal is the fictional painter to whom Istomina credits her work. Blumenthal is a painter who was born in Russia in 1899, studied with Malevich, immigrated to the U.S. in 1925, and lived a long, uneventful life in New York until her death in 1995, achieving very modest recognition for her art only occasionally, and dying completely unknown as an artist. 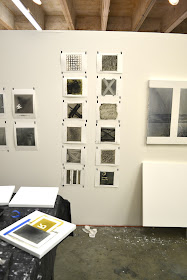 My main question was why create this alter-ego? Why not just do the paintings and claim them as your own? A curator who visited Istomina recently inadvertently answered that question. Looking around Istomina's studied, she declared "Painting is dead." "Blumenthal" shifts the time frame back to a period when painting was most certainly not dead--far from it. 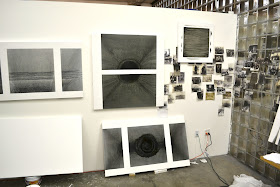 But Istomina told me an interesting thing. She said that when she did the first Blumenthal paintings, she hadn't created Blumenthal yet. Blumenthal the fictional character was only a month old. What this suggests is that Istomina just wanted to do some abstract paintings--indeed, maybe felt compelled to do them--with no theoretical apparatus justifying their existence. She says that while she was doing them, she was so deep into them that such thoughts were banished. Jackson Pollack wrote,"When I am in my painting, I'm not aware of what I'm doing." The problem is, what happens when you are no longer "in the painting"? Istomina would move from the trance-like state of total engagement to self-doubt--is this just a piece of merchandise for sale? Does it have any other meaning? Blumenthal was a way to deal with those questions once she finished the work. 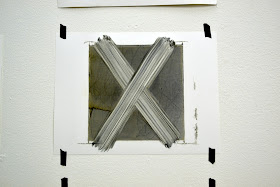 Of course, once you start down that road, Blumenthal takes of life of her own as Istomina adds new details to her biography. The paintings came first, but another approach would have been to make up a fictional painter, give her a biography, then paint paintings that seem to fit who she was. The paintings would then be, in a sense, illustrations for the biography of that painter. That is not what Istomina wants to do, but I wonder if it will be possible to avoid it. She created Blumenthal so she wouldn't have to think about the issues of what it means to be a painter in 2013. But now, can she paint without thinking about being a painter in 1940? 1924? Etc.? 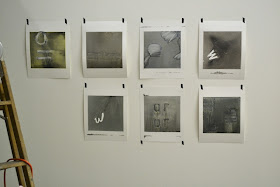 I think so far, she has been able to resist becoming an illustrator of Blumenthal's life. For one thing, these paintings don't resemble paintings from Blumenthal's era. Someone for whom the creation of the fictional painter is the main thing wouldn't necessarily come up with such ahistoric paintings. Blumenthal is not just a painter of the 20s or the 40s, she is a highly eccentric painter from that period, doing work quite unlike her peers. That suggests a reason why her work was neglected--it didn't fit in with the narrative that was forming about modern art at that time. Another reasons for its neglect would be her sex. (One of the most exciting developments in recent decades has been the rediscovery of many women painters whose work was somewhat overlooked in their time--for instance, Seductive Subversion: Women Pop Artists 1958-1968 at the Brooklyn Museum in 2010. I was pleasantly surpirsed to see a large piece by Chryssa hung at the Menil this weekend.) 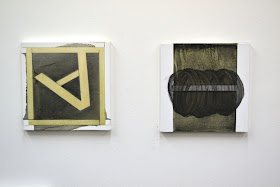 We discussed many other things that afternoon--Yves Klien, Thomas McEvilley, curve-fitting, etc. I tried to find a link between her training as a geophysicist (she has a PhD in the discipline from Yale) and her art, but she mostly shot this down. It was while she was getting her PhD that she became interested in art--by taking art classes at Yale. I am still astonished that someone would spend so much time and effort reaching the pinnacle of a notoriously difficult area of study (geophysics is geology with huge extra dollops of math) only to change courses so drastically. It's a powerful statement about how important art must be to Istomina. 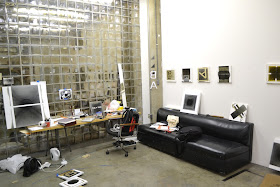 On April 5, an exhibit, Alissa Blumenthal: A small retrospective, opens at Art Palace. I anticipate that it will be excellent.