Comics at the Emergency Room

I mentioned in my last post that Comics: Works from the Collection of Robert Boyd is still on view at the Emergency Room gallery at Rice. I hope readers will indulge me as I publish a few installation shots. 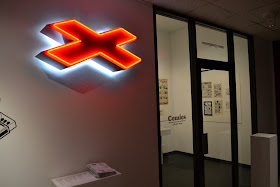 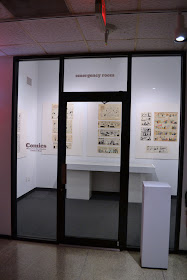 So what are a bunch of old comics pages doing there? Some of these artists could indeed be thought of as "emerging," but about half of them are dead. All the pieces come from my personal collection, so Chris Sperandio suggested the way to think of it was as art from an emerging collector. 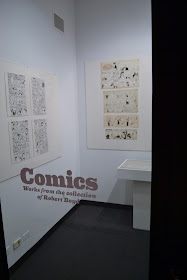 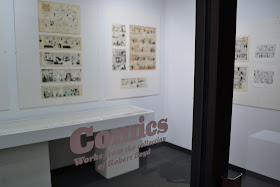 That's flattering, I guess, but feels a little weird. All I did was to acquire this work. It's not that big a deal. Instead, I think that we keep the idea of "emerging" when we think about comics as an emerging art form. That's an arguable notion for an art that has been around since the early 19th century, but it is emerging into the consciousness of the art world. There are a few artists who have gallery representation and whose work is showed by museums. But within the art world, there is little institutional support for comics. As far as I know, the MFAH (and its many counterparts around the nation) are not buying up pages of comics art. 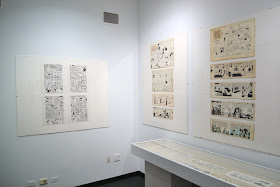 So what, one might ask? Comics is way outside the mission of a museum like the MFAH. Sure, but consider that the MFAH collects furniture and jewelry and decorative objects and films many other items that some might suggest are not capital "A" Art. (The retired longtime director of the Metropolitan Museum of Art--and former director of the MFAH--Philippe de Montebello said that the Met shows "every category of art in every medium from every part of the world during every epoch of recorded time.") The same is true with other museums all over the country. So from where I sit, this is still a blind spot for art institutions in the United States. (And sorry if I'm picking on you, MFAH. You know I love you.) 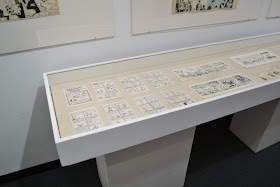 Anyway, it has been a personal mission of mine to bring the art world and the comics world closer together in whatever small way I can. That began with Misfit Lit at the Center on Contemporary Art in Seattle in 1992 (whence it traveled to LACE and several other venues). It continued with Walpurgis Afternoon (a two-person show featuring work by Marc Bell and Jim Woodring) in 2011 at Lawndale. 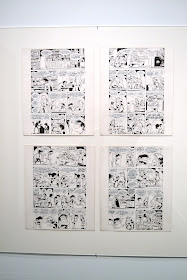 So with this show, I am again storming the castle wall of the art world armed with a peashooter. But eventually an army of critics, artists and curators each with her own peashooter will shoot enough peas to crack that wall. And maybe then we'll cease having shows like Splat Boom Pow! The Influenceof Comics in Contemporary Art (2003) at the CAMH, shows that honor comics by featuring one actual comics artist out of the 40 artists whose work was included. 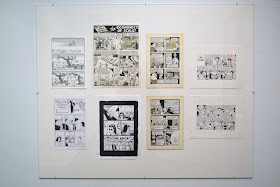 But mostly it was a chance to show off a little bit of my collection and have some bragging rights. It's up through April 11. I'd be honored if readers of this blog would come see it. 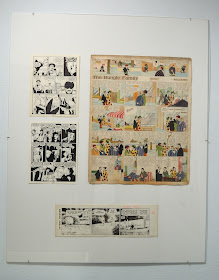 The gallery is on what most people would call the second floor of Sewell Hall (but because they start counting floors from a sub-basement, it's officially on the fourth floor). The hours are Thursday, 5-7:00 p.m., Saturday, 11-3:00 p.m. and by appointment. 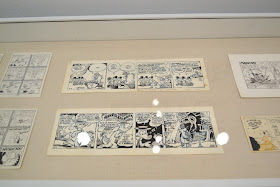