I went to Staple! last weekend. Staple! is a comic book convention in Austin devoted mainly to small press/independent comics. It's not as narrowly focused on art comics as The Brooklyn Comics and Graphics Festival, which is too bad for me because I prefer art comics. (I realize to a non-alternative comics aficionado, this may seem like a trifling if not nonsensical distinction.) But I saw some good art comics there that I liked, including Roughhouse, which I just reviewed. 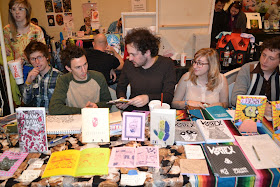 This was the table where I picked up Roughhouse. If I imagine in my head what a group of young art comics creators would look like, it's exactly like this picture! The guy on the right is Brendan Kiefer, but I don't know the rest. [UPDATE: William Cardini, who does Vortex, identified this group in the comments.] (Attention Austin: if you recognize yourself in any of these photos, let me know!) 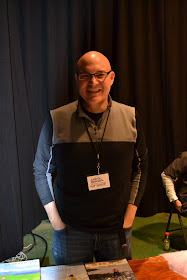 I also saw my old friend Chris Staros, who is co-chief of long-time alternative comics publishing house Top Shelf (where I picked up some books by Alan Moore, Kevin O'Neill and Eddie Campbell). 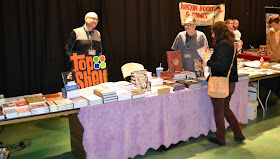 Above is the Top Shelf Booth, manned by Staros and writer/retailer Wayne Beamer. 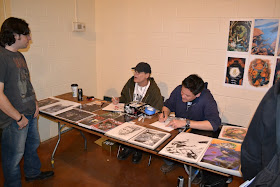 One of the Guests of Honor was James O'Barr (sitting on the left), whose best-known comic, The Crow, was bleak and gothy. In contrast, he seemed quite personable and friendly, willing to chat with and sketch for devoted Crow fans at length.

As for the rest of these photos--I have no idea who these folks are. I bought stuff at some of their booths, so I may be reviewing some of it later. Or maybe not. Anyway, Staple! is not quite like a big mainstream comic con. No Klingons or super-heroes wandering the floor. But like mainstream comics conventions, Staple! was full of people willing to let their freak flags fly. 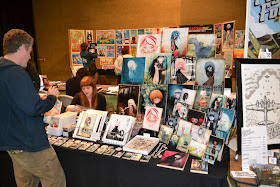 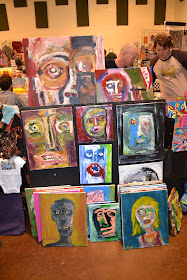 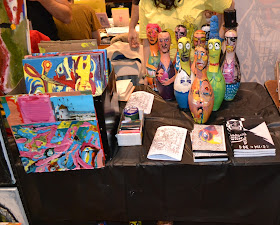 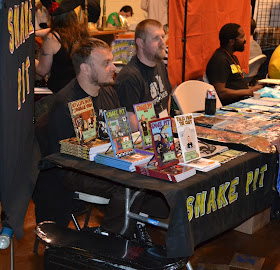 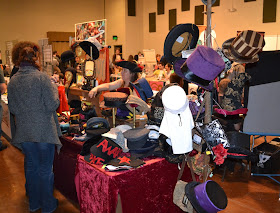 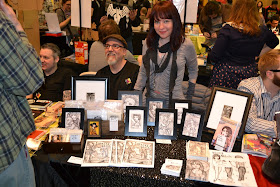 This is Kim Scoulios (right) with hubby Nick Scoulios. She is the creator of Nancy Nebula (you can see copies in the foreground). 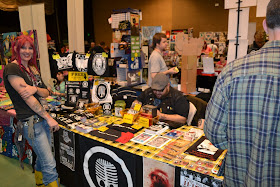 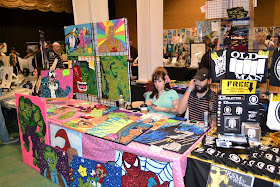