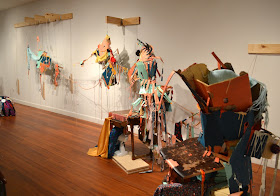 Katie Wynne's A chain of non-events at Lawndale is an installation of various bits of crap semi-connected to one another. I don't say crap in a pejorative way. I use it in the way that Karen Archey did--in identifying a genre of art she called "combining crap with crap." The term both opens up a lineage stretching back to Duchamp's assisted readymades to Robert Rauschenberg's Combines and Gluts to Jessica Stockholder's painted bits of crap and consumer products. It is Stockholder's work that A chain of non-events reminds me of most, but in general it can be seen as part of a tradition that is now 100 years old (Duchamp's first assisted readymade Bicycle Wheel was originally made in 1913). 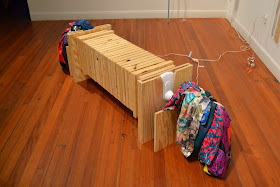 When you walk into the Project Space at Lawndale, the work is stretched out more-or-less in an arc around you. The elements are not all physically connected, but there does seem to be an intent for viewers to follow from one to another. So starting from the left, we have a floor-element that consists of a rectangular wooden central part with two large rectangular end pieces. The end pieces are designed to hold a pair of oscillating fans so that the face up. The fans are on and blowing, but their wind is blocked by a nimbus of brightly colored scarves on each fan. I suspect that the fans were meant to blow the scarves more than I observed here, but perhaps there were too many scarves on each fan. In any case, they did puff up a bit due to the blowing air.

I liked the wooden structure which was simultaneously absurd and purposeful. But the scarves were too discordant a visual element. The colors in any given scarf were acceptable (if a bit loud), but all of them combined created a chromatic cacophony that detracted from the solid homemade virtues of the wooden fan-holder. 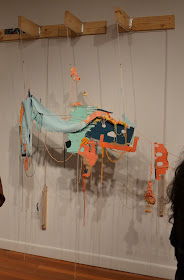 Continuing to our right, there is another wooden structure, this one bolted to the wall. It has painted pieces of fabric and cardboard  hanging from it on strings. The paint is a light blue-green and orange--a very pastel, slightly Southern Californian color scheme. The painting reminded me of Jessica Stockholder and the cardboard reminded me of Robert Rauschenberg. It is significant that the cardboard is ripped, not cut. It gives the piece more of a junkpile feeling, less deliberate than a Stockholder assemblage. 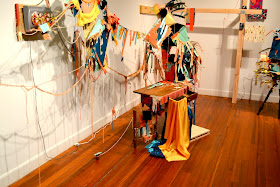 This section in the corner is the busiest. In the left of the picture above, Wynne has mounted a shoeshining machine to the wall, where it spins hypnotically. Cheap motorized household machines appear to be important parts of the Wynne work I've seen (she contributed an extremely simple, elegant piece to The Big Show last year that consisted of a motorized tie-rack and a rectangle of blue satin cloth. Her use of these devices recalls Jean Tinguely's art. Tinguely was another master of crap on crap, gleefully scouring junkyards for old motors and debris with which he built his kinetic sculptures. 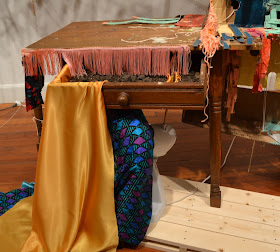 Wynne reprises the use of shiny satin-ish cloth in the drawer assembly. The gold cloth hangs over the edge of the open drawer. Underneath is another oscillating fan, covered with a single scarf. A paintbrush sticks up from the back of the fan into a slot in the drawer, where it swings back and forth. 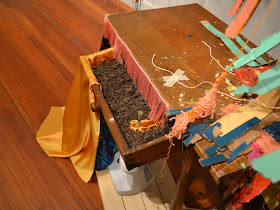 The drawer is lined with the gold cloth which is covered with a thin layer of dirt. The curved slot for the brush is lined with gold cloth, so it almost looks like a smile peeking through the dirt. It's cleverly wrought and in a way reflects her earlier untitled piece in the Big Show, but it feels like too much is happening here. I don't see how the elements belong together, why there is dirt and satin here. The stuff on top of the table--string, yarn, tape, torn bits of painted cardboard--feel more unified than the seemingly more carefully planned and constructed drawer element. 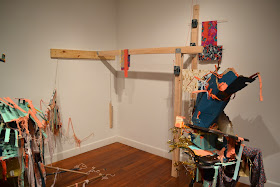 There is another wall-mounted wood structure which leads the viewer to a more-or-less freestanding structure made of stool parts (?), painted cardboard and other crap. 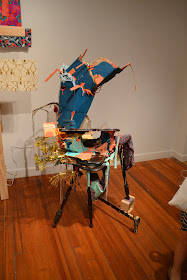 While the rest of A chain of non-events sprawls wildly, this one keeps it all close in. It looks like it wants to explode and fling its crap wide, but it's not ready. This made me think of The Rape of the Sabine Women (1574-82) by Giambologna. This sculpture is identified as being an immediate precursor to the baroque and to Bellini's extravagant creations. The overt emotionalism and dynamism seem baroque, but the way Giambolgna keeps it all tightly contained in a narrow cylinder of space marks it as still a Renaissance sculpture. 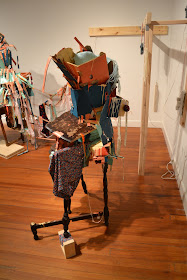 
Wynne could have taken the bits of crap she used in this object and spread them across the floor or up the wall. But like Giambolgna, she constrains it.

The problem with A chain of non-events is that while there are interesting passages here and there, it fails to cohere. The elements are too independent, but many of them don't stand up on their own as individual works. But the virtues are an interesting use of materials, color, and space. And it helps to see this as work in line with a long tradition. Overall, it reminded me a bit of Rauschenberg's The 1/4 Mile or 2 Furlong Piece. This is another large piece (very large) that consists of many individual elements. The elements don't really come together, though. Perhaps that is in the nature of "crap on crap." Because of the disparate origins and natures of the materials, extra effort must be paid to giving them a sense of unity. The element that works the best for me in Wynne's installation is the stool piece--it feels the most like a single autonomous piece of work. With its human-sized volume and excellent colors, it's my favorite "non-event" of A chain of non-events.