Painting the town Blue: Dimopoulos and Dean (and a few others)

On Saturday (3/23/13), I quietly parked my car on a side street off Waugh, inconspicuously crossed Allen Parkway, slipped down the grassy banks to a phalanx of crepe myrtles and matter-of-factly painted them blue. I wasn't alone. There were others. 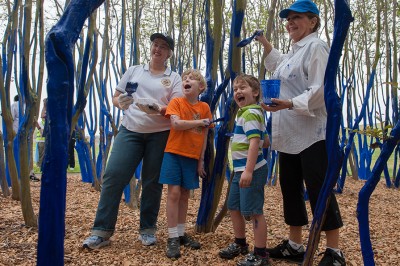 Mayor Parker and some of our accomplices

It wasn't an act of vandalism but rather one of public art. The Houston Arts Alliance, in partnership with Galveston Arts Center and Galveston Island Tree Conservancy, invited Konstantin Dimopoulos to bring his temporary art installation, Blue Trees, to Texas. This ain't Dimopoulos first tree "blueing". He's recreated this art work in California, Florida, Washington and now Texas. In 2011, Blue Trees was a featured installation at the Vancouver Biennial.

Dimopoulos' aesthetic act is simple: make the familiar unfamiliar. He decided to do that by painting trees blue, to paraphrase him, make them "magical." By painting the trees ultra-marine blue--it's not Yves Klein Blue; I made the mistake of assuming it was--he hoped to stimulate his audience, which is basically everyone: art patron and passers by alike, to see trees anew. He wanted the public to reflect on the essential role trees play in our daily existence and to take note of the rapid rate at which primordial forests around the world are disappearing. 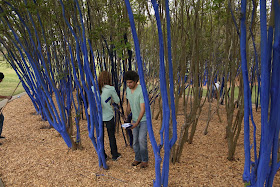 After the loss of millions of trees caused by the drought in 2011 and by Hurricane Ike, HAA, the Galveston Arts Center, and the Galveston Island Tree Conservancy invited Dimopoulos to recreate Blue Trees in both cities to remind its citizens of the devastation and emphasize their importance. 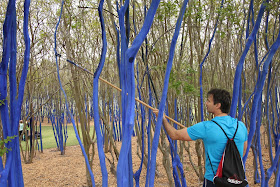 Of course, I showed up at noon on the last day. By that time, the space had been prepped and most of the plant-safe pigment had been applied to the lower portion of the trees. 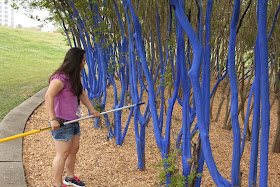 After I spent about 30 minutes taking pictures and asking annoying questions, I, the artist, HAA staff members Tommy Gregory and Piper Faust, and a few hardcore volunteers from Houston and Australia (a.k.a. the artist's wife) painted the upper portion of the trees. 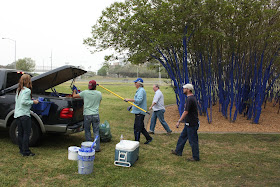 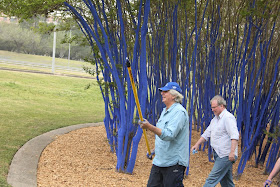 We finished around 2 p.m. Then, it started to drizzle. As we cleaned up, Dimopoulos looked slightly concerned. The "paint" wasn't really paint, he explained. It was simply pigment suspended in water. The binding agent is what's toxic to trees. Once the water evaporates and the pigment adheres to the bark, the color will slowly fade until its complete gone. Depending upon the amount of rain and other weather conditions, this process takes between 6 and 9 months. 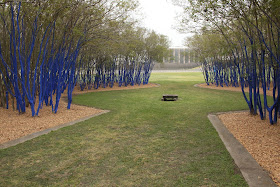 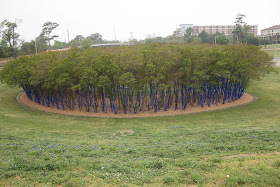 I found the work to be spare and stunning, but then I'm often overly impressed by my own effort.

I recommend judging for yourself.

To see more photos, visit the Houston Arts Alliance website dedicated to Blue Trees to Texas. Or do yourself a favor and see it in person at Allen Parkway and Memorial Drive at Waugh Drive.

You can't miss them. They're the only magical blue trees in the vicinity.