Up-side Down People: A Talk with Kelly Alison

In an artist statement that appeared in the exhibition catalog MFAH published in 1985 for Fresh Paint, The Houston School, Kelly Alison announced she had decided to allow spontaneity to direct her approach to neo-expressionism. She had discontinued, she said, “looking around for something that had meaning and then painting it,” and would instead allow her paintings to “live apart from ordinary perception and have their own meaning.”

In 2008 I wrote a newspaper article about her Theory of M exhibition at G Gallery and gained insight into the manner in which Alison incorporates randomness into her process of drawing and painting on layered collage elements. She begins a painting such as Blood Money for instance by researching how many times the U.S. government propped up a genocidal dictator since her birth. As images come forward, a Cambodian dragon, Nicaraguan horned-devil, missiles, and gun-pointing Uncle Sam’s, they are executed on a ground of newspapers, magazines, sketchbook drawings, and hand-written notes from Philosophy and History classes, while she is in an altered state she describes as “in the moment.”

Alison’s practice is to mindlessly fill sketch books and notebooks with drawings and stream of consciousness writing while engaging in ordinary activities such as talking on the phone. If she applies collage pieces densely it is because she believes this material corresponds to the background noise of television and computer media bombardment. “When I’m doodling an unexpected form such as a burka might surface,” she said, “and I don’t pay any attention to the way I apply the collage layers, don’t think about or over-analyze. It’s guided by the subconscious and put there randomly. There’s subconscious stuff happening.” 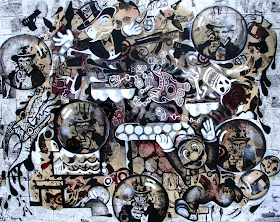 When I previewed Pick Your Poison, an exhibition of thirty of Alison’s newest works at d. m. allison art through April 27, I noticed a few deviations from the past. Some paintings have little or no epigraphic components. And coloring is different. Alison used pastels and lollypop tones for the works’ circular patterns and other abstract forms because those colors are ridiculous near images that represent astringent or tragic subject matter. Her process still involves randomness, and her narratives are still ambiguous. Hoping to understand the artist’s newest works, as well as her development in the past few years, I asked her a few questions.

Kelly Alison: The falling and drowning men are part of an ongoing obsession with the words “Falling, Burning, Drowning Man.” I showed the falling man last year in my Twist of Fate exhibition and I’m now showing the drowning man at Dan’s. Once I painted a drowning man I just kept doing some form of it over and over. I suppose it’s because of pessimism about the chaos in a system that’s ruled by the status quo, day after day after day, I just can't get away from it. I feel helplessness on my own part. I have no idea when I'll paint anything about a Burning man, but it will probably relate to activists and political protesters who self-immolate. To come back to your point about the figure’s legs, they represent man as anonymous, as lacking a soul. The shoe bottoms are inspired by the work of Philip Guston and also that upturned foot in Max Beckman's The Night. Man’s predicament is further allegorized in the flowers.

VBA: When asked the meaning of one of your human comedies you frequently say you are unsure of the arts’ meaning, yet to discuss pessimism hints at meaning.

KA: I’m unsure of meaning. I suppose this work generally relates to mortality. Death is finding its way into my artwork, artist have died, Bert Long and Daniel Kayne, and my mother’s sister, colleagues at work. It’s happened so much lately I suppose I’m more aware of how short life is.

VBA: Kelly, you actually painted a burning man. I recall a painting made before 2007 that was full of writing, along with dismembered body parts, fractured architecture, and a hand grenade. It had an entire paragraph about Kennedy backing Diem to prevent the Communist takeover of South Vietnam, and the 1963 burning suicides of Buddhist monks. The center of its composition was dominated by a large red abstract form, which I’m certain was your burning man.

KA: Those notes were from a history class. 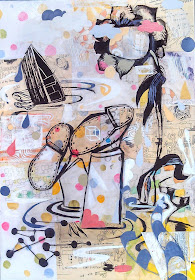 VBA: Drowning Man has the motif of a sinking boat. Please comment on that.

KA: The sinking boat forces the viewer to ask the question "what happened here?" Again it is a statement of doom, these painting are all about doom, whether real or fantastical. The figures have lost their humanity.

VBA: Although the new works have less text, there’s still some interesting scribbling. Drowning Man for example has the words “Secret Police,” “165 Dead, 6 Children” and “December 1948, My brother woke me up by saying they had come.”

KA: The text in Drowning Man and the other paintings is random. I purposely keep it that way to allow synchronicity as I proceed. It helps for the work to talk back to me with its own ideas. I create text from doodling a couple of hours every day while watching TV or talking on the phone, or during meetings. The words “Secret Police” deepen the mystery of "what happened here?” Also there are random words from a show I was watching about a bank robbery. Another painting contains an image of an automatic weapon called the Glock, because I’ve been following the gun debates. My art still has drones, many are the tiny spider photography drones, because I’m fascinated by the technology.

VBA: I see Kelly Alison in Game of Drones. She’s that small hair bow-wearing figure that holds an umbrella, and it’s not the first time you’ve put her in a painting. Another time she was a bent over stick figure at the bottom of the composition, with the entire narrative balanced on her back.

KA: She is an additional vehicle for my story telling, a narrative tool, as well as a self portrait. 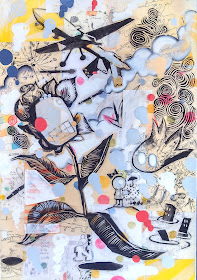 VBA: You did the same thing in 2011 in House of Cards which was exhibited in Art Car Museum’s Fourteen exhibition. Its self portrait was in the form of a crawling baby and it had a machine that spit out dollar bills and drones on its back. In that painting Baby Kelly was somewhat of a focal point.

KA: House of Cards related to the financial mess. The cards coming out of the magic-hat represented mortgage backed securities, houses were under water, a bird that turned the lever of power stood on tarot cards, and the ten of diamonds and jack of clubs symbolized fraud and greed. And yes, the machine spewing out dollars was the Fed printing money and the military using drones, with the whole thing balanced on the baby’s back. You probably noticed I painted a second crawling baby at the top of the composition, which was a salute to Keith Haring’s Radiant Babies. 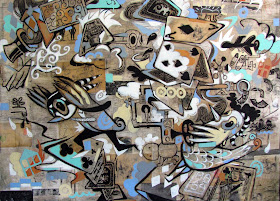 VBA: I get all worked up when you reference other artists. The “anthropomorphic flowers” that populate the new works are derived from Yayoi Kusama’s large polka-dot decorated flower sculptures, and her novel "Violet Obsession," in which a young girl talks to flowers as agents of the universe.

KA: The image of the man’s tied-up hands in last year’s Twist of Fate show similarly cited Richard Serra’s 1968 film “Hands Tied.” Serra made a flickering black and white video of a man’s hands, bound at the wrist with twine, struggling to untie the central knot. As soon as the hands break free the struggle begins all over again. The paintings voiced the absurdity of life and death, our perpetual battle to stay afloat.

VBA: What’s with the UFO’s?

KA: UFO’s are one of this series’ allegorical apocalypses, along with asteroids, floods, drone strikes, voodoo, drought and nuclear attack. All of these, alien abductions included, are allusions to mans’ folly, and helplessness and inability to escape it. Your question made me think more about it. I included UFO’s because they are pop icons, just like the other catastrophes in Pick Your Poison are very iconic in a pop sort of way, as seen on CNN etc. 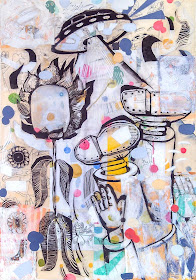 VBA: UFO’s are now on beer. The flowers are strange. In an artist statement you called them “victims” of the various apocalypses, but at the same time indicated they are divinatory.

KA: Both, I’m interested in plant consciousness and plant shamanistic power. Many ancient cultures believed that plants, like animals, are consciously aware of human beings and seek to heal us with their energy. Jagadish Chandra Bose experimented with plants’ nervous systems and believes they feel pain and have awareness of affection.

KA: He was influential. Once I created a motif and then realized it was his woodcut.

VBA: You mentioned being inspired by an Asian art exhibition at MFAH. Could your shift in colors relate to that?

KA: All those candied colors, and I went to China and that opened me up.

VBA: I saw a triptych and several other pieces you made just before a trip to Peru. The forms which replicated the Nazca lines and some patterns in nature were mesmerizing.

KA: I was anticipating getting closer to some kind of inner knowledge, and even the possibility of the extraterrestrial. Collage placement and brush work in those works were intensely random, I tried to be almost worshipal, letting my skin pour into it. I was in a state of mind, in a way you could say it was like a prayer. I felt something calling me.

VBA: OK, tell that fun story about the big-city curator’s trip to “the country.” It was 1984, before you had a studio, and you were painting in your husband’s barn in Brazoria County.

KA: And the barn didn’t have any doors. Barbara Rose was organizing Fresh Paint and came there to see my art, and my husband’s cows came in the barn and stood near us like they were looking at the art.