Self-Portraiture through Social Media with a Side of Crystal Meth

As a self-proclaimed art critic and reviewer, I was curious about/envious of/doubtful that Devon Britt-Darby's exhibition, Art Criticism and Reporting, could command my (or anyone else's) attention or interest for longer than it took me to inhale my drink. I went out of morbid curiosity because as a writer I know that art writing is many things: analysis, critical thinking, emotional insecurity, pettiness, and personal preference professed, but art it is not. I doubted that Britt-Darby's work could hold its own against Adela Andea's sculptures (think Donald Judd on acid) 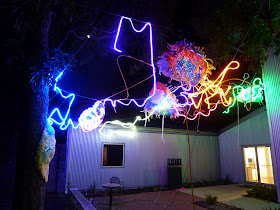 or the mixed media complexity of Giovanni Valderas but I was willing to listen to his talk and check it out the work.

The talk wandered through the maze that has become the Art Guys Marry a Plant and Britt-Darby's response, a social sculpture/performance piece, The Art Gay Marries a Woman, and the antics that have followed. (It's all on his blog...at least the interesting parts.) The topic was germane, but  the presentation was more Jermaine Jackson in that you had a vague sense of why you were there but the show wasn't delivering what you wanted. For instance, I learned that according to Devon (Douglas Britt's nom de sex) being a sex worker in San Francisco is relatively easy and lucrative. Lots of artists moonlight as sex workers (according to one artist/ex-sex worker). Also, sex work is a cash business that makes crystal meth addiction that much easier.  Go figure.

However, the talk did eventually meander toward art and set the stage for the source of the works in the exhibit, the portraits. The works are monochromatic, text-based works composed of grey acrylic paint and glass particles on canvas. The legibility of the works shifts with the changes in the ambient light in the gallery. 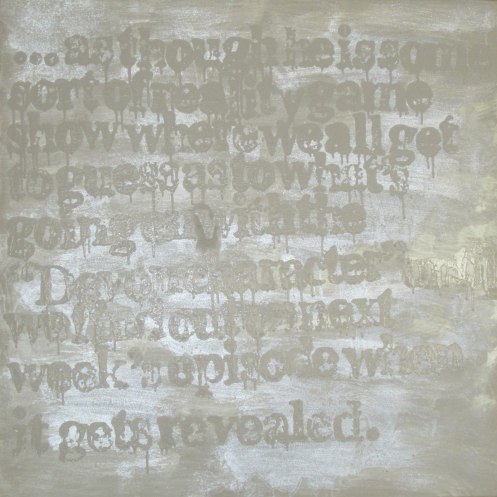 Britt-Darby cites Glenn Ligon's coal dust paintings, which play with legibility and text, as one of his influences. 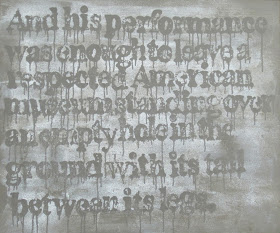 Britt-Darby added another visibility challenge to his canvases by borrowing a technique from the Los Angeles based artist Mary Corse. Corse uses glass microspheres, which are used to make painted lines on roads reflective.

The text consists of quotes taken from social media sites. Some of the media reviews art. Some of it reviews escorts/sex workers. All of it reviews Devon Britt-Darby. Britt-Darby deems these works on canvas as portraits of the people who wrote the art criticism and reporting. In his creation myth, he is the Rorschach test by which these reviewers reveal themselves. As he states of the works and himself in the third person, "[these texts] aren't by him, they are directed at him." As an artist selecting which textual passages to paint, he views himself as in control of his subject. He is the portrait artist with himself as a common, defining theme for his subjects.

The conceit becomes (as he presents it) portraits of the authors as seen through the lens of his sex worker-crystal meth addiction-plant marrying protest antics. And I reject that conceit. His assertion seems a little disingenuous to me. It's both silly and safe for Britt-Darby to position these works as portraits because the focus becomes these reviewers and the culture/audience that they represent. But it's not. Anyone who heard the talk or views the show will immediately understand that it's all about Britt-Darby. Not that there's anything wrong with that. Because there isn't. These portraits are unique and intriguing exactly because their medium is the words and perceptions of others about the artist. 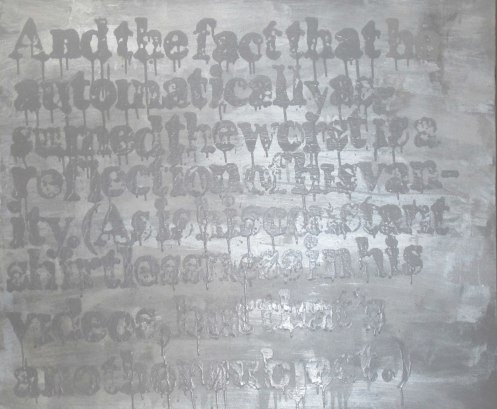 It is in this selection process that Britt-Darby portrays himself, that he self-actualizes for all the world to see. Not as a sex worker or meth addict or a gay-rights activist or a self-absorbed columnist, but as an artist. It is in these supposed "portraits" of his critics and reviewers that he creates his own revealing self-portraits.

The supposition of the show begs the question--if what a person (artist/critic/audience member) says about a subject (controversial or not) portrays who s/he is, then DOES NOT the criticism of someone that the criticized chooses to repeat/re-present to an audience through verbal or visual art self-portray (or betray) that person?

I say it does, and I'm not sure what that says about me. But I'm thegreatgodpanisdead, and I'm OK with that.