CAMH curators Valerie Cassel Oliver and Dean Daderko for the past few years have organized programming that doesn’t simply showcase contemporary art. From Donald Moffat’s largely AIDS-era Extravagant Vein to the black performance survey Radical Presence to Gina Pane and Joan Jonas’ most recent Parallel Practices, they have instead used their curatorial efforts as a springboard to not only provide an art historical framework, but really an historical framework dedicated to vocalizing queer, feminist, and minority histories. Daderko continues the tradition with LaToya Ruby Frazier: Witness in the CAMH’s downstairs Zilkha Gallery.

Frazier, while engaging in various practices, is mainly a documentary style photographer. She has been documenting herself, her family, and her hometown of Braddock, PA, since the age of sixteen. Like many midwestern industrial cities, Braddock was once a thriving steel producer that has, over the decades, fallen victim to shifting financial interests and flailing economies. With Braddock as the backdrop, Frazier parallels personal and familial struggles, juxtaposing them with the struggles of her larger community.

Landscape of the Body (Epilepsy Test) (2011) quite successfully depicts this juxtaposition. A diptych on a single gelatin silver print, a black woman (perhaps Frazier’s mother?) sits pensively on the left side, hunched over the hospital bed, her bare back adorned in a hospital gown facing the camera. Several thin electrical wires, seemingly attached to various portions of the woman’s temple and forehead, parabolically swoop downwards, and then reconnect back up to the machine at the top right corner of the photograph. As the machine acquires data, presumably to diagnose a prior epileptic seizure, the viewer looks right and encounters a freshly demolished building. This building is likely the corpse of the University of Pittsburgh Medical Center, demolished in early 2010 as a result of millions of dollars in losses. The hospital wires extending from the patient’s head flow seamlessly into the disemboweled hospital, reappearing as errant cables and crooked rebar. In all of its luscious atrocity, the diptych reads as a two-cell storyboard—where the woman’s futile attempt at diagnosis clearly will not end well. The hopelessness is compounded by the direction of the building: its crumbling walls face left towards the patient, intimating that they could collapse on her within a moment’s notice. 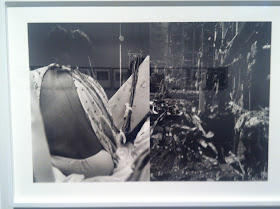 In 2010, the blue jeans company Levi’s launched an advertising campaign using Braddock, PA as its backdrop. The slogan “Go Forth” is plastered upon images of frowning models and Braddock’s rusty, decaying landscape. Here, Levi’s is attempting to showcase a pioneering, “pull yourself up by the bootstraps” marketing strategy, all while insensitively and arrogantly ignoring the decimated community it is depicting. The company established that same year a photo studio in Manhattan, both as a way to allow photographers—amateur and experienced alike—a place to work and yet another alternative marketing ploy. Frazier uses the storefront window of this photo studio to stage her performance piece documented in Art21’s New York Close Up: LaToya Ruby Frazier Takes on Levi's (2011).

Fully clad in Levi’s attire, she alternates between miming movements of labor and writhing and grinding her lower half against the concrete sidewalk, whittling away the very clothes on her body. Between her purposeless, self-destructive act of labor and the cackling onlookers inside the studio, Frazier’s performance is powerful, poignantly confrontational, and absolutely humiliating for everyone.

And then there’s the work that simply barks. Self Portrait (United States Steel) (2010) is a looped dual channeled video consisting of a bare-chested Frazier confronting the camera in the left third of the frame, while the right two-thirds comprise of a single shot portrait of Braddock’s steel factories. She stoically implores the camera throughout the piece—her scowling expressions slowly eroding into disappointment then despair, and back again to fury. Meanwhile, the factories to the right exhale billows of smog that slowly maneuver and dissipate into the sky. The formal composition of the slowly moving smoke would have been striking and metaphorically relevant had the video’s pixilation not been so severe. That, and Frazier’s intended edginess and vulnerability are undercut by the perpetual cliché that haunts art history: the nude female figure. 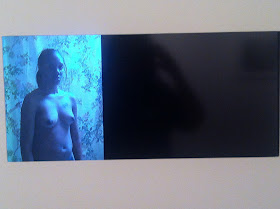 Directly across from Self Portrait (United States Steel) are a series of prints entitled Campaign for Braddock Hospital (Save Our Community Hospital) (2011). The twelve photolithograph and silkscreen prints display images taken directly from Braddock as well as the Levi’s advertising campaign. She has written notes on each of the images, providing facts that voice community concerns and challenge Levi’s flippant slogans. The prints, while visually compelling, are so literal that they telegraph to the viewer all the answers without providing any real questions. 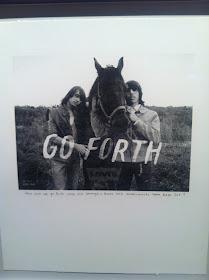 LaToya Ruby Frazier,  Campaign for Braddock Hospital (Save Our Community Hospital), 2011, Suite of 12 photolithograph and silkscreen prints on paper, 17”x14” each

LaToya Ruby Frazier is not only an artist; she is also an activist. And as an activist, it is her responsibility to advocate for her community and vocalize its detriments. However, Frazier’s activism paradoxically registers the most not when she enumerates facts and events or dictates to the viewer how he should feel, but rather when she allows the formal elements of her photographic and performance work to take precedence.