Pan Recommends for the week of July 25 to July 31

It's not quite the dog days of summer, but with triple digit temperatures, things are slowing down in Houston considerably. The events below are just about everything happening this weekend as far as art goes (I may have missed something--if I did, feel free to mention it in the comments). Fortunately, it all looks pretty fun--fun enough to brave the soul-crushing heat to see! 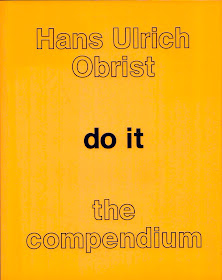 my autographed copy of Do It: The Compendium

. I'm mainly curious to see Alabama Song (with a name like that, they better have a whiskey bar). They have an Indie Go Go campaign going right now, and I want to see this show before I decide whether or not to contribute!

The 5th annual Visual Stimulus Package at GGallery, open for viewing at 11 am and then for buying at 6 pm. Apama Mackey's annual pop-up show of inexpensive artworks by well-known Houston artists is back. All art is either $50, $100 or $200. This show usually has some great stuff, and the prices are unbeatable. 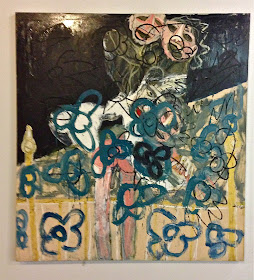 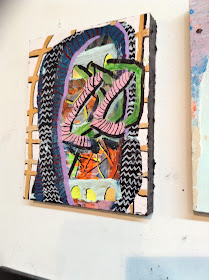 A piece by Dylan Roberts

New Paintings by Brandon, Dylan, Guillaume and Isaiah (i.e., Brandon Araujo, Dylan Roberts, Guillaume Gelot and Isaiah López) at the MAS Exhibition Space at Spring Street Studios, 6 to 10 pm. The ever-evolving Montrose Art Society has some new young members apparently--it should be a show worth checking out. 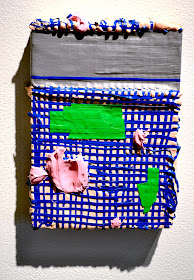 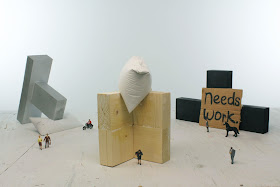 Window into Houston: Jim Nolan shifting SCALE at 110 Milam St., 8 to 10 pm. Even though the new improved Blaffer Museum is complete, they are continuing their fun series of window exhibits downtown, this time with Mr. Matter-of-Fact himself, sculptor Jim Nolan.