I went over to see Patrick Renner's Tunnel Funnel today. I wasn't the only one stopping to take photos. People love this enormous object. It's been well reviewed. It's on a scale that even drivers zipping by will notice it--a plus in Houston. 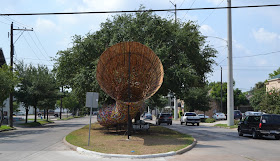 People still fondly remember Inversion, Havel + Ruck's deconstruction of the old Art League cottages from 2005. That Funnel Tunnel recalls it is a nice link to local art history for those in the know. 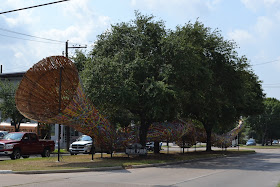 But that knowledge is not necessary. People just think it's cool to look at. It may succeed in catapulting Patrick Renner, an artist we have written about several times before both for his solo work and his work as part of the Exurb collective, into local fame. 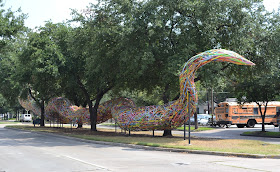 Swamplot, the local Houston blog about real estate and places, has written about it several times. I like reading the trollish comments (a small minority, thankfully) condemning it. But there was one criticism of the piece among the Swamplot commenters that I thought worth considering:

Hmmmmm….
Engage the ground, engage the trees.
Make the installation about the place.
There’s no grace, there’s no elegance.

It’s so, so close. It’s a great ‘almost’, just needed another iteration on the drawing board.

OK, "no grace, no elegance" seems a bit extreme, but I agree that it feels a little clunky, especially around the tail. It doesn't taper smoothly. 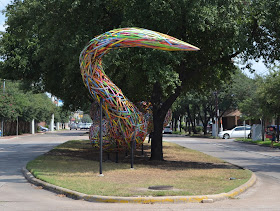 I also don't like that the lattice of wood slats is a bit threadbare in places. I heard that they ran out of slats (underestimating the total needed, which must have been immense). 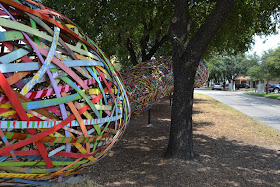 At first I was disappointed that the slats were random colors, instead of some deliberate pattern. Because the random coloring of the wooden elements actually makes it a less visually striking piece--somewhat "greyed" out due to a cacophony of conflicting hues. 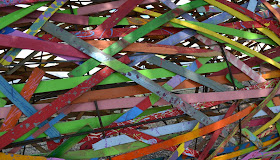 But the more I think about it, the less this bothers me. It's important to think about the difference between a good piece of art and a good piece of public art--their virtues overlap but are not identical. By being coated with randomly colored slats, Tunnel Funnel is, in a sense, graffiti-proof. This is not to say that a tagger couldn't tag it, but if they did, so what? It would just add to the already chaotic whole. 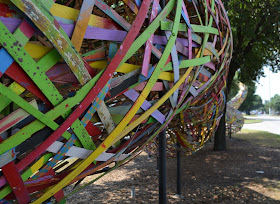 To me, that is evidence that the piece is ready to be engaged by the public. It's a piece that will please drivers, amateur photographers (I expect images of Funnel Tunnel to proliferate like mad on Instagram, Pinterest, Facebook, Flickr, etc.), and maybe even graffiti writers. It has no other purpose but to be visually engaging, to be pleasurable. (It has none of the smug moralism of Tolerance, for example.) 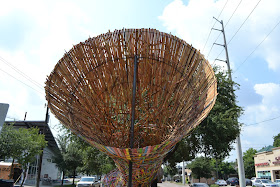 Personally, I like it a lot. But you know me. I love lawn art.