Appropriation/Exchange: Posada and his Descendents 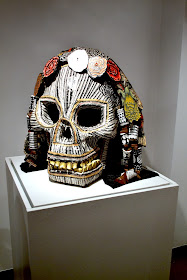 Dennis McNett in the information card that accompanies Wolfbat Storyteller writes that as a teen, he was impressed by punk rock and skateboard graphics. "When I took my first printmaking class and pulled my first woodblock print it was graphic, bold, and raw. It had the same aesthetic of everything I was into during my early teens." As a printmaker, his eyes were opened to German Expressionist graphics, Japanese woodcuts and the great Mexican printmaker José Guadalupe Posada. Studying Posada, he saw the "similarity with the punk movement, energy, and graphic sensibility." I think this particular artistic journey is one that many of the artists in Messengers of the Posada Influence, on view at the Museum of Printing History, have more-or-less taken.

This is on my mind because of an editorial recently published by Free Press Houston , "White People Are Killing Day of the Dead". Its author, Luciano Picasso, calls the use of the Day of the Dead by what he identifies as "white organizations" racist.


This goes for Lawndale Art Center in Houston, Texas. Their 26th Dia de Los Muertos exhibit is the 26th time they turn Day of the Dead into a cultural garage sale to make money. They lump in Dia de Los Muertos with a Gala and Retablo Silent Auction so they can insult us twice over, and there is not one actual alter on their premises that speaks to that day. They make money off this mess to pay for their White programming all year long. I’m sure they will give us the same lip service the Texas Book Festival gave: we have a Hispanic intern  . . . yada yada yada . . . the equivalent of “I’m not racist because I shagged a Hispanic once.”

This goes for the Museum of Fine Arts Houston (MFAH). This is another example of a White arts group taking money for Latino outreach and never reaching Latinos. They’ve got several events for “Day of the Dead” including a DJ party with IKEA-the Swedish plundering of our demographic, and a couple of sorry ass lectures by Germans showing slides of their cool adventures in Mexico. Wow, deep. See, this proves that MFAH stands for Mother Fucking Ass Holes.

It's hard to read this editorial because it is so vituperative and hate-filled. I guess the Museum of Printing History is lucky they didn't get called out by name. I doubt Luciano Picasso would have approved of Wolfbat Storyteller.

But it is hard for me to see McNett's appropriation of Posada's imagery (and via Posada, imagery from the Day of the Dead) as anything but homage to a master. It is an expression of respect. 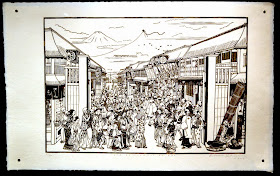 Of course Luciano Picasso's editorial implies a one-dimensional world of racist appropriators of a victim's culture. It can't explain an image like Dia de Muertos en Edo. Who's appropriating what? Artemio Rodriguez, a Mexican print-maker, went to Japan where he made this print. It's a playful combination of two disparate cultural elements--a 19th century street scene in Edo (as Tokyo was was called until 1868) and the Day of the Dead calaveras. 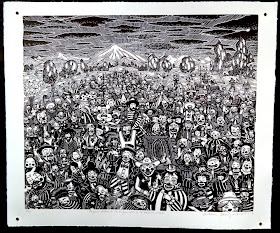 A satirical artist like Rodriguez doesn't worry about offending cultural sensibilities, such as when he sends this group of clowns to make an offering to the Virgin Mary. Except that this is an actual thing--clowns do march every year to make offerings to the Virgin! That's what true satirists discover--and that includes Posada himself--that reality frequently exceeds your ability to make fun of it. All you can do is draw it and proclaim, this crazy thing exists. 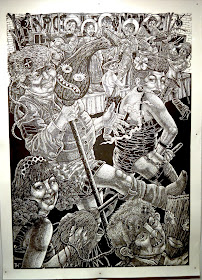 Printmaker Tom Huck spoke on the night of the opening. His talk covered his own work and Posada's about whom he was very knowledgeable. The influence was direct--he even tried to use paper that matched the color of the yellowed newsprint on which Posada's woodcuts were printed. But his work avoids the motifs of Posada. Huck comes up with his own. But where the two artists are similar is in their rage and their humor. "The Bloody Bucket" was a series of enormous manic satirical prints. Like Posada or Hogarth or Gillray or so many others, he can be quite jolly while exposing the underside of the society in which we live. The Bloody Bucket was a bar in his hometown of Potosi, Missouri. He takes typical habitués and creates narrative images of them--some mildly pathetic, like the loveable loser dancing with a broom above. 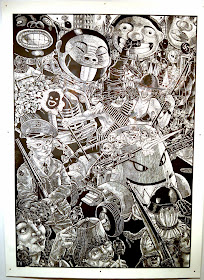 Other barflies are less appealing, like the racist WWII vets in Joe's Meat Grinder.  Huck spoke about how he'd hear about "the greatest generation" in reverent terms, and how that didn't jibe with his own experiences at all--that the WWII vets he knew were all unreconstructed racists. That's what a good satirist does--he goes after sacred cows. 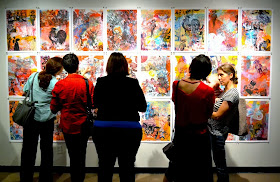 Carlos Hernandez and the Amazing Hancock Brothers teamed up for this enormous tribute to their master. The individual prints in Posada: 100 Years On are full of visual quotes from Posada. Hernandez and the Hancock's have similar styles, but the layering of image and color here reminds me more of Hernadez's work than the Hancocks. Of course, in a collaborative work like this, it's hard to know who did what, and certainly they all have a similar aesthetic--they are, as Huck spoke about in his talk, "outlaw printmakers," who take inspiration from folk culture and often despised subcultures (sideshow banners, for example). Obviously the Day of the Dead is huge for Hernandez--his work is full of calaveras. Every year he puts together a Day of the Dead Rock Stars exhibit. He designed a calavera label for St. Arnold's beer. Their kaleidoscopic remixing of Posada is a beautiful tribute. 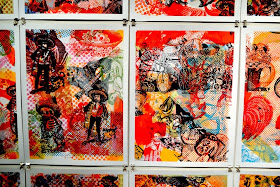 When I see a show like this, I'm reminded of one of my favorite songs, "Chiclete Com Banana", written by Gordurinha and Almira Castilho.

(I’ll only put bebop in my samba
When Uncle Sam plays the tamborim
When he grabs the pandeiro and zabumba
When he learns that samba isn’t rumba
Then I’ll mix Miami with Copacabana
I’ll mix chewing gum with bananas
And my samba will turn out like this:
bop-be-bop-be-bop bop-be-bop-be-bop
I want to see the confusion )

I first heard this sung by Gilberto Gil, but I like the original 1959 Jackson do Pandeiro version better. When I see the work of the artists in this show, from the U.S. and Mexico, I see the "confusion." And it's glorious.