Rahul Mitra's exhibit at Hooks Epstein Gallery has a ponderous title: Race, Religion, Politics, Art and Sex at the end of the world. It's ambitious, I'll give it that. But no art exhibit could quite live up to that title. The work in this show is from 2001 to 2013. This time period has been a busy one from Mitra. In particular, his Box City installations have been created in Italy, in Oklahoma, and here at Lawndale Art Center last March.

This installation changes from place to place--it's created from scratch using local materials (corrugated cardboard boxes and in the case of the Lawndale installation, wooden wine crates) sometimes in collaboration with other artists. 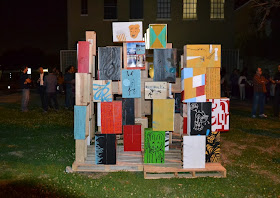 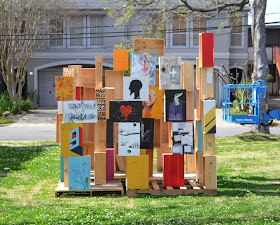 The reference is to the vernacular architecture of favelas and shanty towns--places where the very poor build their own homes from recycled material--cardboard, plywood, sheet metal, plastic sheeting, etc. Because of the steep hillsides in Rio, its favelas often take on an appearance that Mitra's installations resemble. They look like stacks of random boxes. And I think this precarious stacking in Mitra's work is meant also to contrast with the perfect verticality of skyscrapers--designed by architects, built by skilled builders, paid for by official institutions, whether private or public or some combination, projecting an image of wealth and solidity. A Box City, by contrast, could be washed away in a heavy rain. Skyscrapers imply permanence. Shanty towns are provisional. Their dwellers don't possess title to the land they live on. At any time, men with writs and bulldozers can come, and the residents will have to get up and build new provisional shelters elsewhere. To paraphrase Anatole France, the law, in its majestic equality, forbids the rich as well as the poor to build houses on land to which they don't have title. 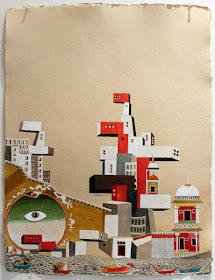 The show at Hooks Epstein contains mostly drawings and paintings. Some, like Invisible City, are directly related to the Box City installations. These cities are invisible because we don't want to see them. (Of course, when I first heard the phrase "invisible cities," I thought of the poetic cities that Marco Polo describes to Kubla Khan in Italo Calvino's Invisible Cities

. And Mitra's cities are fantastic and poetic in their way. He's not a documentarian, after all. But I don't think you can go too far with this connection.) 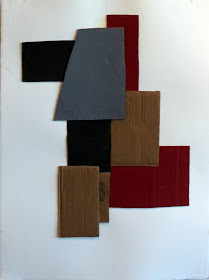 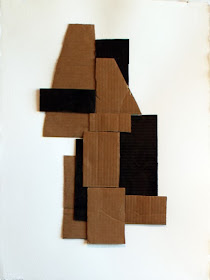 In the two cardboard collage versions of Invisible Cities, Mitra gives us the strongest link between his installation work and his more traditional wall pieces. These may be my favorite pieces from the exhibit (although it's hard to choose!). With the smallest number of elements and the cheapest material imaginable, Mitra has created objects of formal beauty that also manage to embody his idea of the invisible cities where the wretched of the Earth reside. 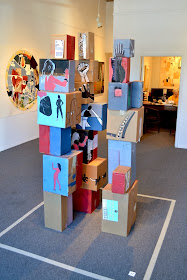 In the center of the gallery, Mitra has installed a Box City installation called Sex and the City. As usual, each of the boxes that forms the installation is painted with iconic images, most of which don't have obvious meanings. But this particular piece features a lot of images of women--particularly a thin woman with long hair,  standing contrapasto, with one fist raised. Sometimes she is nude, sometimes she wears a miniskirt. 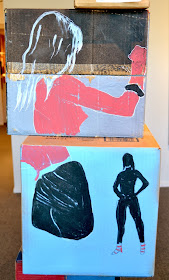 Mitra is identifying "sex" with heterosexual male desire. But the Box Cities have a political element, and the women on Sex in the City are depicted (sometimes) as protesters or revolutionaries. It's a contradictory mix--sex object and committed revolutionary. It reminds me of the quandary in the late 60s of  Playboy magazine, which was liberal and sympathetic to the protest movements of the time, but still basically trafficked in a hedonistic lifestyle and female sex objects. So it ended up with hilariously contradictory images like this: 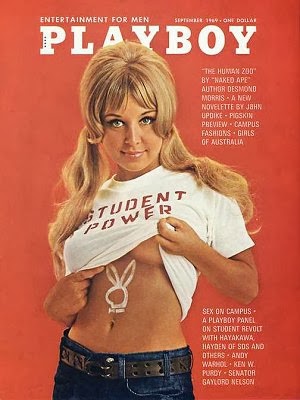 So my question as a viewer is this--is Mitra trying to have it both ways? Or is he satirizing having it both ways? Or is it a weird combination of both? There are precedents--when Robert Crumb drew "Lenore Goldberg and Her Girl Commandoes" (1969), he was drawing the Amazonian women he was attracted to and making fun of the women's liberation movement--and yet, he is obviously sympathetic to them. For example, he depicts their enemies as evil, sexist idiots. 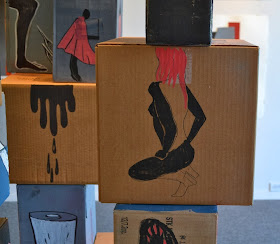 Some of the images on Sex and the City dispense with the revolutionary aspect altogether. Perhaps the way to read this is that Mitra is not exempting himself from sexism, so even when he wants to include women as part of political action implicit in the Box Cities and Invisible Cities, he won't pretend to see them purely as comrades. He can't turn his "male gaze" off. 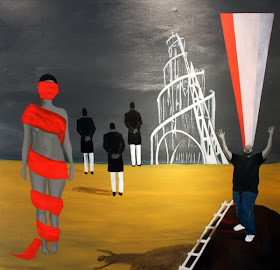 Two of the pieces depict other artists. In Pruitt Summons Truth, artist Robert Pruitt stands with arms raised on the right. Triangular rays emanate from his head towards the sky. He is in a bleak landscape with a low horizon--I was reminded equally of De Chirico and Tanguy. The mysterious figures amplify the De Chirico feeling. And looming ominously is a ghostly version of Tatlin's Monument to the Third International. The forced perspective and inexplicable elements suggest dream images, and that suggests surrealism. 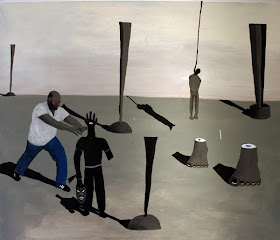 That surreal feeling of a strange blank landscape littered with inexplicable objects and figures is also present in  Trenton Fights Fate. I assume that "Trenton" is Trenton Doyle Hancock. Mitra depicts him action, about to assault a strange menacing figure with a hand for a head (an a single eye in the hand), holding a decapitated head in his right hand. 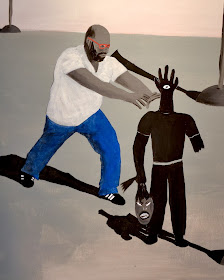 Race, Religion, Politics, Art and Sex at the end of the world runs at Hooks-Epstein through November 27. Mitra will have a public conversation with Catherine Anspon today, November 16, at 2:30 pm. (Seating will be limited.)