This past Sunday at the Houston Cinema Arts Festival, experimental Austin filmmaker Scott Stark showed several of his films at Cinema 16. It was essentially a chronological display, culminating in his most recent effort, The Realist (2013). Although varying widely in subject matter, there seemed to be an obvious stylistic thread between all of them, which was a flicker created by stereophotography. Stark presented to the audience a rather unsophisticated wooden contraption that nevertheless effectively held two cameras with the intention of taking shots simulating the slightly alternate perceptions naturally occurring in human vision. Coined by him as existing in 2.5 dimensions, the films take a shockingly flat yet layered quality, an aesthetic that becomes obviously more sophisticated and mastered over time. This technique coupled with his penchant for the kind of flickering that is variously nauseating and mesmerizing quickly leads to a set of short films that at once heighten reality, induce seizures, and are really, really weird.

Oddly enough, the film that shares the least in common with Stark’s signature style may also be the most impactful: Hotel Cartograph (1983). It is a banal, droning 16mm film of carpet in a San Francisco Hilton. That’s it. While at first begging to be cast off as an annoying and expected trope of avant garde cinema, it steadily transforms the viewers’ experience from frustration and tedium to what critic Michael Sicinski describes in the post Q&A as “Carpet Land.” Stark requires us to study and attend to the formal qualities of architecture that we routinely dismiss, that we quite literally walk all over. Here Stark makes no illusions: he’s simply walking around with a cart, staring at the floor, and he wants us to know it. Yet it somehow feels transformative, surreal, and with its dim hallway lighting, even a bit sinister. 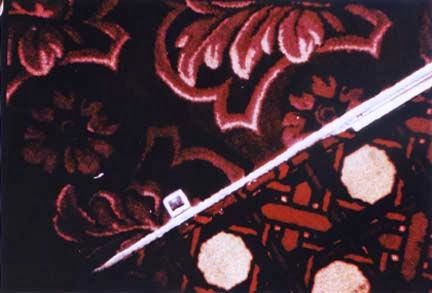 Hotel Cartograph, while stylistically so divergent from his other films, retrospectively makes sense as a precursor to his other work. Stark expresses continuity through intense focus and scrutiny upon one object, or set of objects. But while he traverses the camera through a static object or hallway in his very early films, the focus becomes inverted later on as he uses the flicker to mutate a static shot. This is most epically represented by Speechless (2008), where Stark alternates flickering shots of landscape photography with extreme close-ups of clitorises. Once again, the viewer braces, fighting back the urge to roll her eyes at what at first seems to be an obvious and pathetic pandering to shock value. But within the first few minutes, it becomes clear that the flickering lends evocative formal qualities to such overbearing imagery. The vulvae seem to ecstatically vibrate, as if they are cyclically birthing themselves. It’s the type of movement that commands and defies meaning, vacillating between anatomy, pornography, and sincere, caring investigation. The visual linkage between the vagina and vaginally reminiscent landforms is heavy-handed. But the connection of biology, fertility, and sexuality to earth nevertheless asks interesting questions and implores the viewer to consider what, whom, and how we are rendered speechless.

The series ends with The Realist, an 81 minute film combining flickering and stereophotography, and it is clear by now that Stark has become a master of his own aesthetic. Filmed mostly within the confines of a department store, sharp vibrating, tight cropping, and rabid bursts of color immerse the viewer in nearly overwhelming propensity. She feels whisked into and paralyzed by a violent dance of inanimate objects. It becomes a surreal interior space occupied by commodities almost forced to life against their will. Paired up with a looping, melodramatic, and even humorous soundtrack by Daniel Goode, the film’s cadence lends to a simultaneously scary, funny, and critical narrative, even with its heavy abstraction. Unfortunately, Stark seems to display a crisis in confidence with The Realist’s already strong implicit narrative, overlaying it with a silly and tragically dumb love affair gone wrong between mannequins, culminating in the lead getting splattered in red watercolor paint that’s intended to read as “blood.”


The Realist (preview) from Scott Stark on Vimeo.

The enormous benefit to an event like the Houston Cinema Arts Festival is that we are provided access to a wide array of filmmakers, including exciting experimental work like that of Scott Stark’s. Hopefully HCAF and Stark will continue to bring this kind of challenging work to Houston.