There’s a curious pairing going on at the Menil right now. On the one hand, there is the Luc Tuymans show Nice, a title that coolly represents the works’ vacuous draining of life and emotion. And right next door is the Wols retrospective, a show so wrought with love and aggression that it’s hard to determine if whether their adjacency is brilliant or crazy. If anything, each one provides a respite from the other.

Wols was an abstract painter from the 1940s that represented a group of artists, along with Jean Debuffet and Georges Mathieu to name two, that represented the European movement art informel. It was a abstract painting movement that unfortunately got overshadowed here in the United States by Abstract Expressionism. Luckily for us, Dominique de Menil was an enormous Wols fan, allowing for a comprehensive comparison between the larger than life deKoonings and Rothkos and Wols’ relatively modest paintings. What objectives did all of these artists share? What were their specific methodologies and how, among other things, did they achieve it with scale (or lack thereof)?

Toby Kamps of course doesn’t literally answer these questions, although he does seem to be asking these questions and many more in his curation. It quickly becomes obvious that Wols wasn’t simply a painter: he was also a photographer and drawer. And it also becomes clear within moments that Wols, while being influenced by the people of his time like the Surrealists and Paul Klee, was clearly looking introspectively, producing innovative works that seemed to be speaking an interior language unlike that of his contemporaries. 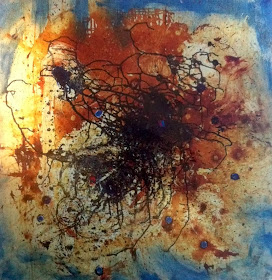 So what was the structure of that interior language and how does the viewer go about accessing it? Given the disparate media and sheer amount of work in his abbreviated oeuvre, piecing it all together seems like a dizzying prospect—yet somehow Kamps seamlessly strings it together. Like a film that starts with its climax then immediately cuts to the flashback only to build back up to what we’ve already seen, he cinematically slingshots the viewer from the front room of paintings—Wols’ final works—to the photos and drawings of an earlier period and back again to his later abstractions. This dictation of movement in the space is how Kamps allows the viewer to build the connective tissue between all the work in spite of its disjunctures.

Much has been written and discussed of this connectivity. What was the linkage (and slippage) between Wols’ interior and exterior worlds, and how was it represented in his artwork? Philosopher Jean Paul Sartre—to sum it up somewhat reductively—thought it a conflation of the two. He saw Wols as a troubled man wrought and ravaged by poverty, an artist whose work was an extension of his misery. But in connecting his paintings to his photos to his drawings and back to his paintings again, there seems to be repetitious formal treatments apparent in the work that reach far beyond artistic and emotional vomiting: namely that of a nucleus. 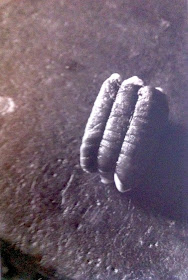 From mannequins to food to self portraits, Wols’ photographs are varied in subject matter. Yet more often than not there seems to be a centralized epicenter of bursting activity, most prominently exemplified by Untitled (Nicole Bouban) (ca.1933). It’s a fairly innocuous portrait of a beautiful woman resting blissfully. However, her head feels nearly bifurcated by incisive stripes moving in two directions. Wols uses the hard lines to create tension, the stripes simultaneously serving as a backdrop as the head emerges forth while also compressing her face, claustrophobically pressing her back in. His handling of line in this context serves as a clear precursor to his abstract proclivities. 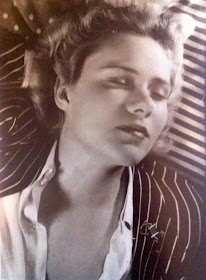 As the viewer proceeds left into the room of drawings, she encounters numerous Klee-esque works on paper: relatively small ink drawings adorned with playful watercolor backgrounds. While an interest in figure and surrealist subject matter carries through most of the work, as time progresses the drawings seemingly coagulate towards the center, densely compacting movement and activity. The climax of this density is shown here with La ville sur pilotis (1944). A tightly compacted composition that Wols must have drawn with a magnifying glass, it reads as a city that isn’t quite sure whether it has been uprooted, freely floating, or precariously balancing on the very apparatus meant to keep it above water. 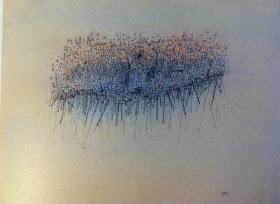 And as the viewer falls back into the original space of paintings, the work seems less like abstractions and more like explosions. Rife with all-over flinging and scrawling and smudging of paint germane to its time period, Wols’ abstract paintings retain their nucleic identity with multiple loci within a single frame. Defying simple or singular interpretation, these scabbed eruptions emanate a quiet knowledge that birthings and similar generative moments are often consequences of violent activity. 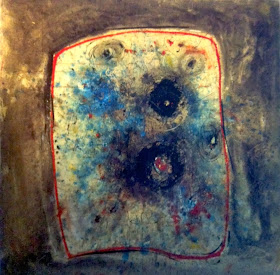 While Wols rarely dated anything—a move that must have been incredibly frustrating for Kamps as well as Wols scholars alike—he did sign nearly all of his work, a gesture common in his time period. But while the signature commonly appears in the bottom right hand corner of the work, it’s never in the same spot. Sometimes it is shoved far into the edge while other times falling almost centrally into the canvas; sometimes it is painted boldly and fluidly in black while other times being barely scratched into the paint like a ghostly apparition. A signature is the kind of formality that most artists overlook: a simple way for them to stamp its authenticity. Yet Wols seems to have treated it time and again as a formal consideration of the work, thoughtfully positioning it in relation to its content.

It seems that Wols was grappling with languages repeatedly in his drawings and paintings. In a true exercise of ambivalence, it feels like much of the work was the result of semiotic warfare—this being most prevalent in Oui, oui, oui (1946/7). Here an interior visual language of color and layers and circularity directly butts up with an actual exterior language—as if Wols went spelunking into a cave of his own interiority and was linguistically trying to claw his way out. He’s furiously scrawled desperate affirmations all over the canvas. What exactly is he saying yes to? What is he is giving permission for? And at the bottom right appears “WOLS,” itself an unintentional mangling of his name that the artist adopted. It’s a moment of textual lucidity that shockingly feels more schizophrenic than the rest of the picture plane. 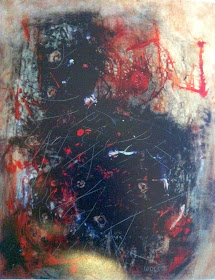 It is no secret that Abstract Expressionism is thoroughly tread territory. But showing work at the helm of art informel simultaneously sheds light on an overlooked movement while additionally informing the entirety of abstraction in the late 1930s to early 1950s. And with the Wols retrospective, the Menil has faithfully represented the comprehensive though short career of an all too often ignored yet nevertheless important abstract painter.

Wols: Retrospective runs until January 12, 2014 at the Menil Collection.
Robert Boyd at 11:57 AM
Share