VIDA is an organization that supports "women in the literary arts" and has for the past several years been counting how many women are published in and reviewed by literary magazines and journals. The results for 2013 were pretty depressing, as have been most previous years. For instance, The New York Review of Books really doesn't use women writers all that much: 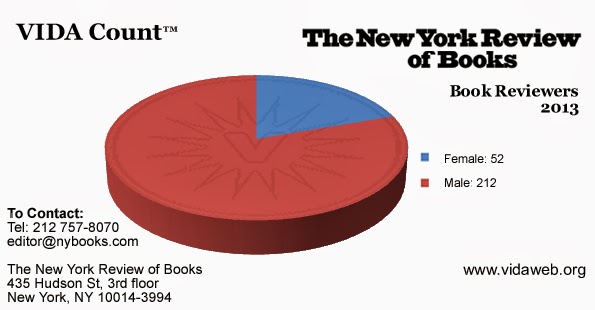 And I guess that might have something to do with the fact that they don't review books by women very much. 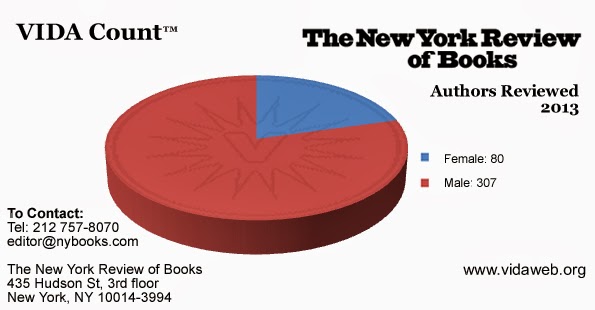 Really depressing, especially because I like The New York Review of Books.

If we look at how many men versus how many women posted on The Great God Pan Is Dead, it looks pretty great! 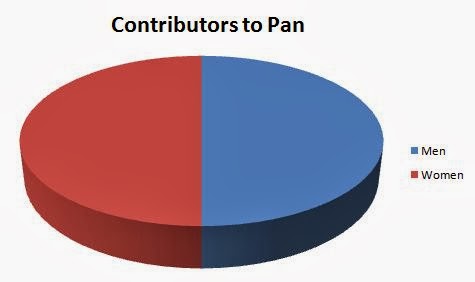 But not so fast. If we look at it in terms of "posts by women" vs. "post by men," it looks terrible. 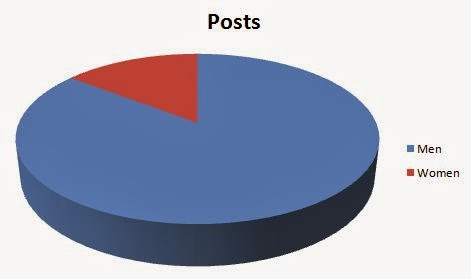 The explanation (excuse?) is simple. Out of 272 posts on Pan in 2013, 215 were written by me. While Betsy Huete and Virginia Billaud Anderson contributed 38 posts together (Carrie Schneider only did one--but it was a good one!), Pan is still pretty much my project. (Also thanks here to Dean Liscum and Paul Mullan for their posts--Liscum is responsible for the most popular post in Pan history.)

To be honest, I would rather it not be a solo album with occasional guest vocalists. I'd like more of you writing for Pan. We pay nothing (which can only be justified by the fact that we make nothing). But we offer the opportunity for you to get your writing up on line quick. We want criticism and journalism, as long as it deals with art in Houston and vicinity.

I know there are a bunch of you studying art history at St. Thomas, Rice and the University of Houston. Wouldn't you like to write something that is read by more than just your professor? I invite you to get in touch with me.

All you would be writers, email me at robertwboyd2020@yahoo.com. Pan wants you!
Robert Boyd at 11:54 AM
Share