In 1787, Emma Hart (later Lady Hamilton), invented a new art form called "Attitudes," debuting it at a party hosted by William Hamilton, England's ambassador to the Kingdom of Naples.


When [the audience] had assembled, he called them to hush and servants snuffed a few of the candles. In the gloom, they could just catch sight of a female figure draped in white, her hair flowing around her shoulders. As she came closer, they recognized Mrs. Hart, Sir William's pretty, witty mistress, who had been laughing at their jokes, flushed with gaiety, entertaining them with anecdotes about England. But now she was pale and almost ethereally composed. Taking up the shawls that lay at her feet, she began to swathe them around her, to kneel, sit, crouch and dance. They quickly realized that she was imitating the postures of figures from classical myth. First she pulled the shawl over her like a veil and became Niobe, weeping for the los of her children; then, using them to make a cape, she was Medea, poised with a dagger, about to stab. Then she pulled the shawls around her into seductive drapes, becoming Cleopatra, reclining for her Mark Antony.

Almost as soon as they had begun to predict her next pose, she disappeared. They sat openmouthed, as servants relit the candles and offered more wine. (England's Mistress: The Infamous Life of Emma Hamilton

Hart combined dance training she had received and her experience as a model for painter for George Romney to create her Attitudes. Emma Hart's Attitudes became a sensation for thirty years, especially after Goethe saw them and told others about Hart's new art form. 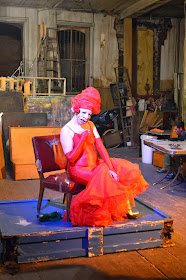 I thought about Emma Hart's 18th century proto-performance art as I watched La Pocha Nostra perform Corpo Insurrecto at Notsuoh on the third night of the Lone Star Performance Explosion. The large open second floor of Notsuoh had two wooden risers on and around which the performance took place. The audience largely stood between the two, switching their attention back and forth between them. One was dominated by Erica Mott, who had two fellow performers, David B. Collins and Thuy-Linh Cornett,  who supported her. The other pedestal mainly featured Roberto Sifuentes, assisted by Jana Whatley. 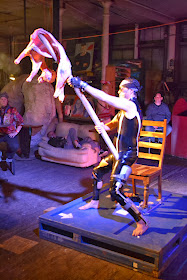 Roberto Sifuentes with a skinned goat

The reason Emma Hart's Attitudes came to mind was that each of the performers slowly cycled through a series of poses. They moved very slowly and deliberately. They weren't doing things; they were being things. They were performing a series of tableaux vivants against a continuously changing soundtrack that went from the Ride of the Valkyries to grindcore to Supertramp. 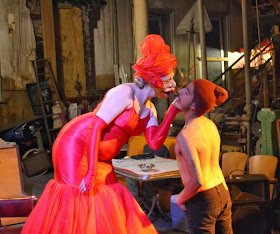 Erica Mott and an audience member

At the same time, I was also reminded of this Doonesbury comic strip:

Here Mike Doonesbury, Trudeau's homme moyen sensuel, sees his wife JJ's performance art for the first time. Incomprehension at the antics of performance artists, sometimes bemused, sometimes outraged, was common in the 80s and 90s, culminating perhaps in the rescinding of grants to the NEA four in 1990 and the controversy that followed. Corpo Insurrecto reminded me of these 80s/90s era performances. Perhaps this is because La Pocha Nostra was cofounded by Guillermo Gomez-Peña, a notable participant in the 80s-90s performance scene. The costumes worn by Mott and Sifuentes recall the miscellaneous mixture of quasi-ethnic costume worn by Gomez-Peña and Coco Fusco in The Year of the White Bear and Two Undiscovered Amerindians Visit the West (1992–1994). In the recent past, Gomez-Peña has been one of the performers in Corpo Insurrecto. I'm not sure why he wasn't in this particular version of it. 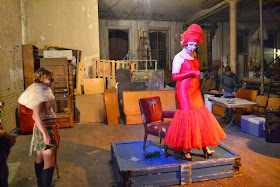 One one hand, Corpo Insurrecto is filled with images that amuse and compel. On the other hand, it feels like a performance that checks off the standard tropes of performance art. Hodge-podge costumes? Check. Audience interactivity? Check. Nudity (semi in this case)? Check. Overt sexuality? Check. Disgusting fluids? Check. And so on. Even La Pocha Nostra seems to acknowledge this procession of familiar moves. "How can we remain open, original, porous, funny, critical, without falling to post-ironic jadedness or becoming one more 'packaged product' for international festivals?" How indeed? 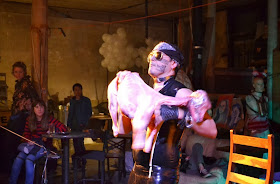 Sifuentes and his goat friend

I don't think there is an easy answer to this. Watching a performance by La Pocha Nostra is like reading a new book by an established novelist. Not only will that book contain those aspects of novels that readers have come to expect--prose, characters, plot, a beginning, an ending, etc.--but it will also likely deal with concerns that the author is already known for and be written in the author's familiar style. 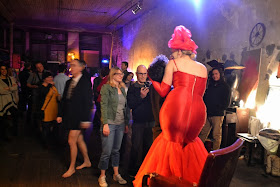 Collins, Mott and the audience

In other words, if this performance made you nostalgic for the 90s, it's because there is a direct link between it and the performers who created the ground-breaking performances of the 90s. 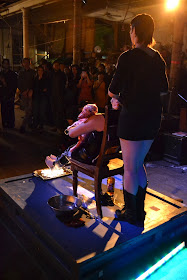 I can appreciate this continuous tradition. But this doesn't help with the other problem--the "Mike Doonesbury" problem. The meaning of this series of tableaux is not particularly obvious. Emma Hart never told her audiences what her Attitudes were meant to represent, but she depended on the classical education common of the class of viewers who saw them to fill in the blanks. Perhaps La Pocha Nostra is similarly depending on familiarity from its audience, but if so, I'm the equivalent of an ignorant peasant who has somehow stumbled into a performance of Attitudes. The meanings of the performers' actions and poses were fairly mysterious to me. 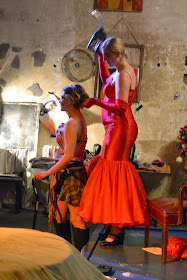 Thuy-Linh Cornett occasionally walked around with a cane and a pronounced limp. At one point, she had a piece of cloth sewed into the crotch of her outfit. Erica Mott wore a mask with hugely exaggerated lips and a plastic extension on her tongue. Mott changed into a Mad-Max-style black outfit with an exterior spine and a huge strap on penis. She work a pink mask that resembled Pussy Riot's balaclavas (perhaps in solidarity). 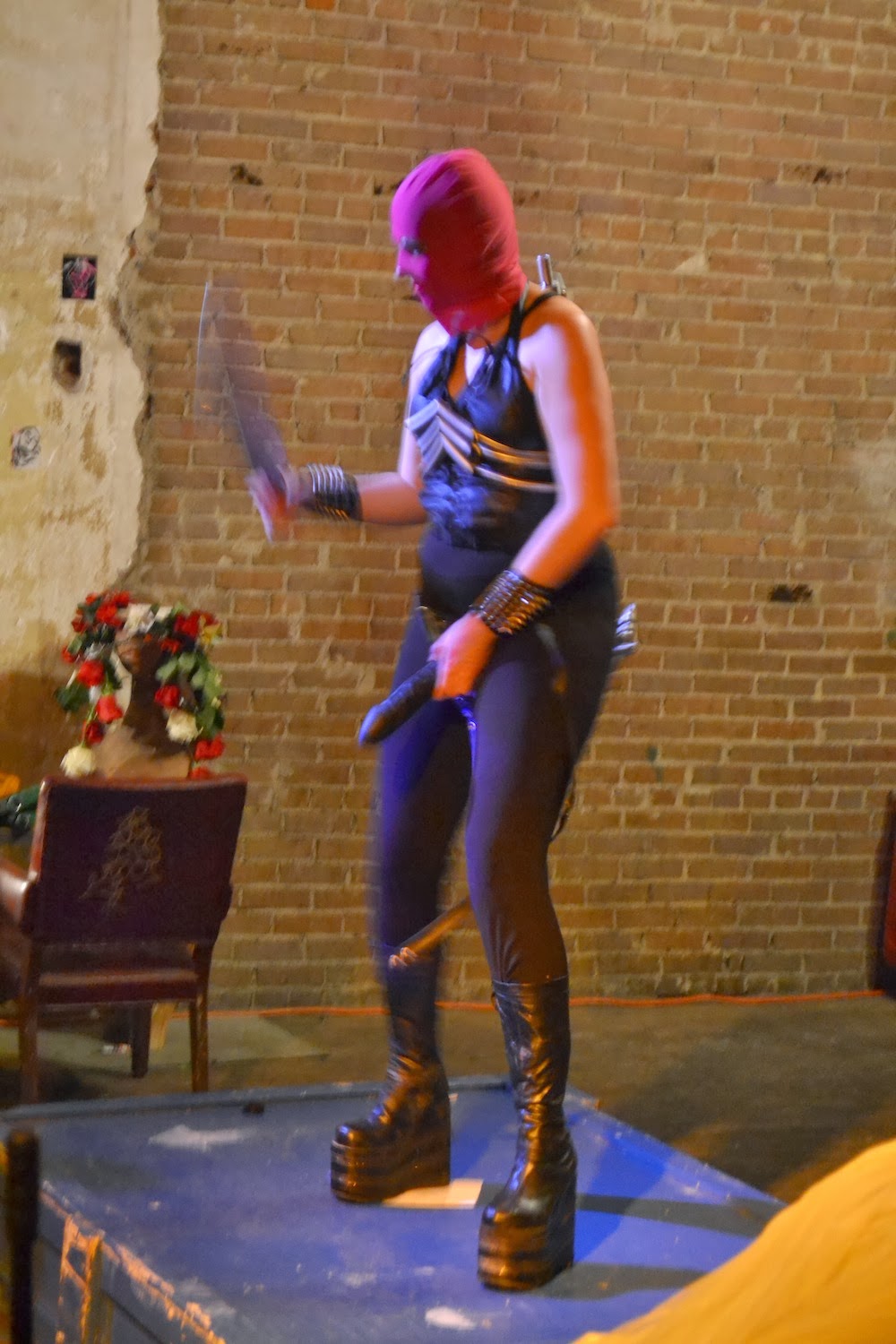 Mott with balaclava and strap-on

David B. Collins wore a suit jacket, dress shirt and tie--nothing else. Except for when he donned a rubber mask (George W. Bush?) and sat in a chair, legs apart so that his penis was visible. People sat on his lap to pose for photos. 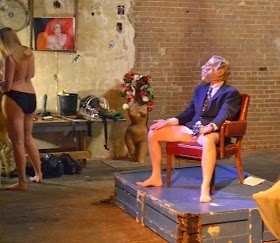 Robertos Sifuentes, dressed in a torn wetsuit and leg brace, with Meso-American-style markings on his face, posed with a skinned goat carcass. He wrapped his face in leather cord. He held his feet over a tray of lit tea candles. Then he posed with tea candles on a wooden bar resting on his shoulders. 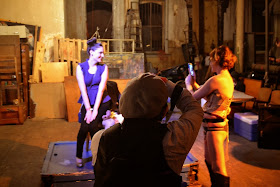 Erica Mott donned a white rubber (?) dress and posed holding three large fish. The fish started leaking fish juice on her. Her facial expressions were somewhere between ecstasy and anguish. 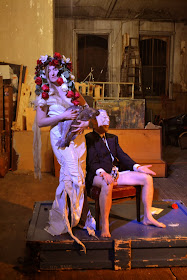 Mott with her fish and Collins with his mask

I list these poses without interpretation because I don't even know where to start. My own reaction was incomprehension, boredom, amusement, and finally a feeling of dramatic completeness. But I am certain that there was much more there. 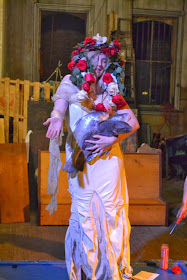 Collins in a classical pose

The audience was a key part of the performance. The performers seemed to expect people to take photos, and we did. Over the hour and a half-long performance, I am going to say that hundreds--if not thousands--of photographs were taken. Instagram, Twitter and Facebook were flooded with them, even while the performance was happening. This was anticipated by La Pocho Nostra. They wrote, "Is audience participation relevant when pop culture is constantly asking us to participate in meaningless consumerism, and every new technological gadget is asking us to 'talk back'? And whom do we talk back to?" I'm a part of these questions. 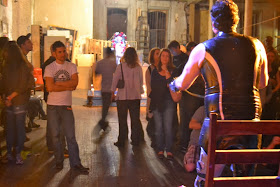 The audience between Sifuentes and Mott 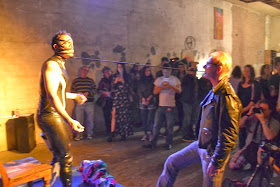 Mott and an audience member play with a leather cord 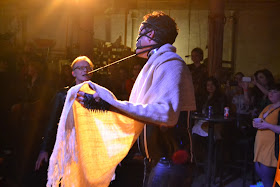 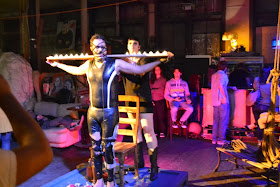 A crossbeam of tea candles on Sifuentes' shoulders 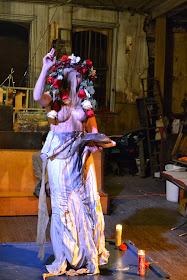 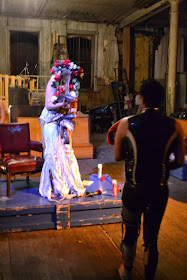 The performers on each of the two pedestals never had any contact with one another until the end of the performance. Roberto Sifuentes carefully wrapped the now dismembered goat in a colorful Mexican blanket then carried it across the room to Mott, still holding her fish. The pair left the room together, leaving Whatley, Collins and Cornett behind. After a series of bizarre tableaux, this ending was surprisingly emotional. Suddenly the performance seemed to be about two lovers, admiring one another from afar and finally joining together. 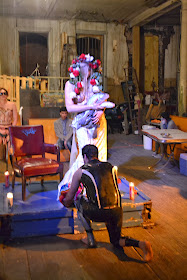 Sifuentes gives up the goat 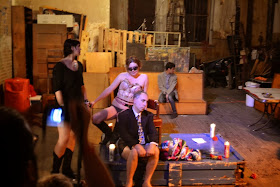 Whatley, Cornett and Collins remain behind as Mott and Sifuentes exit

And with that, Corpo Insurrecto was done. It was just what you want and expect from this particular genre of performance art. Within its genre, it is not an avant garde work (although it would probably seem so to the Mike Doonesburys of the world). But perhaps that indicates a maturity of the medium. Performance has reached a stage where there are conventional aspects that can be explored and recombined endlessly. I think Corpo Insurrecto was such a work.
Robert Boyd at 8:44 AM
Share