Hairy Who and the Chicago Imagists

This is a trailer for an upcoming movie about the Chicago Imagists. It will premiere in Chicago in May.


HAIRY WHO & THE CHICAGO IMAGISTS - Official trailer from Pentimenti Productions on Vimeo.

The Chicago Imagists were a group of painters in the 60s and 70s who did highly stylized, often grotesque non-abstract paintings. They were frightfully out-of-step with what was happening in New York, where art history was being written. The best known of them are probably Ed Paschke and Roger Brown, and the Hairy Who (including Jim Nutt and Karl Wirsum) is the most well-known sub-group of this movement. 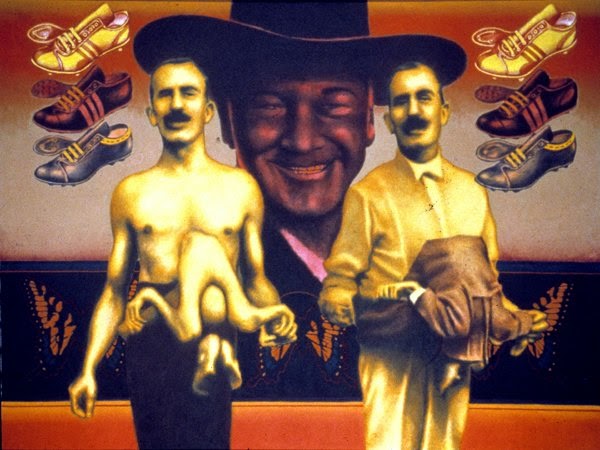 I first became aware of them in the early 80s when I was taking a class from William Camfield called "Art Since the 40s." He showed just two slides of this work, and one, by Jim Nutt, caught my eye. I ended up writing my paper for the class on the Hairy Who. I wish I still had a copy of that paper, but I'm sure I'd be embarrassed by it now.

What I didn't realize at the time was that this was a local movement. It was a Chicago thing. These artists all knew each other and were all influenced by one another. There were local institutions (art spaces and galleries, of course, but also schools and bars and living rooms) that facilitated a sharing of ideas. This scene had its connectors who brought artists together and helped make things happen (Don Baum, for example). And I'm fascinated by the mechanics of such a scene.

Over time I've come to realize that what happened in Chicago has happened in other places. Los Angeles is an obvious example. All these regional scenes have suffered from being mostly outside the official canon of art history--just two slides in an art history class. The whole multi-museum series of exhibits under the umbrella of Pacific Standard Time in 2011 and 2012 was an attempt by Los Angeles to boldly claim its place in art history.

I'm committed to Houston's art--what its artists are making today and its art history. I know there are plenty here who worry about Houston being willfully provincial and inward looking. I don't really think this is true. Houston artists have as much connection to the world as anyone (and given the fantastic accessibility of people and information due to the internet, we have way more connection to the art world than artists in the 60s and 70s did). We get a new infusion of artists from elsewhere every year because of the Core Program. In any case, I now think being provincial is good--if it leads to art scenes like the Chicago Imagists or the L.A. artists who arose from the Ferus Gallery scene.

It goes without saying, then, that I am really looking forward to seeing Hairy Who and the Chicago Imagists.