In Review – René Magritte at the Menil 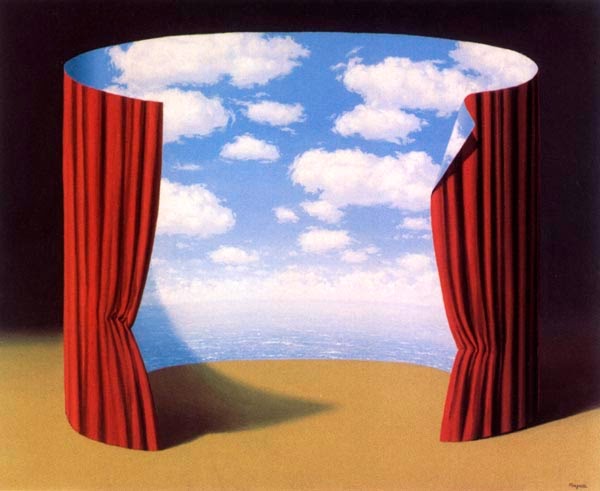 René Magritte, The Memoirs of a Saint, 1960 (The Menil Collection)

In a catalog essay for the major 2006 exhibition “Magritte and Contemporary Art: The Treachery of Images”, held at the Los Angeles County Museum of Art, Michel Draguet flatly states that the artist “contributed decisively to the development of what would become known as postmodern theory”. Among these theoretical concerns are, of course, the historically constructed and variable character of representational apparatuses – including painting – and those apparatuses’ impact on the accessibility, for us, of objective reality. This has been a persistent and controversial point in debates around postmodernism.

“Memories of a Voyage: The Late Work of René Magritte” is currently on exhibition at, and organized by, the Menil Collection and is derived primarily from the museum’s large, permanent holdings of the artist’s post-1940 work. Assistant Curator Clare Elliott, with Menil Director Josef Helfenstein, curated. The show complements “Magritte: The Mystery of the Ordinary, 1926-1938”, which has been organized by the Museum of Modern Art in New York, the Menil, and the Art Institute of Chicago and is also now in Houston. Viewers have the opportunity to, once again, reexamine these ubiquitous images and the objects upon which they are based.

In western painterly conventions, the curtain has been integrally related to the window, posited as a transparent opening into the world. The curtain in The Memoirs of a Saint (1950) is not hung flat and neither reveals nor conceals a window; instead – violating the laws of gravity – it rests vertically in an otherwise-empty, stage-like setting. A low light radiates from the left side of the “stage”, beyond the boundary of the canvas; the curtain casts shadows, thus confirming the floor. However, no ceiling can be discerned; the background quickly darkens, but the intersection of the floor and a rear wall is not apparent. 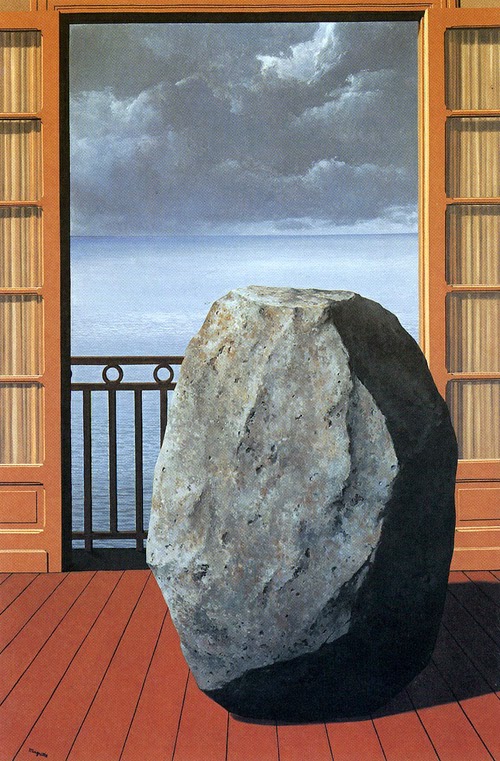 The Invisible World (1954) is similarly staged. A strong light comes from the left foreground, rather than from the seascape seen through the open balcony doors, and casts a sharp shadow to the right of the boulder mysteriously occupying the room.

The red, pleated curtain in The Memoirs of a Saint wraps around an empty space on the “stage”, creating a cylinder that is open and into which the viewer can peer. As with much of Magritte’s work, this key figure – the open drum – is centered; lies in the medium distance; and occupies the bulk of the canvas surface. Its inner side, unexpectedly, is a flat image of blue sky and sea. The top right corner of the curtain is folded back, indicating the landscape continues as the inner side wraps around and out of sight of the viewer. Curiously, any imputed light from the bright interior sky does not cause the curtain edges to cast shadows.

The Memoirs of a Saint is – whatever Magritte’s expressed opposition to symbolism – an allegory about the process of representation. The source of the landscape image is indicated nowhere; there exists no transparent window or open curtain which would reveal an outside objective world. So, the correlation – or non-correlation – of that representation vis-à-vis such a world is rendered as indeterminate. There is only the image directly inscribed on the curtain itself, an apparatus actively constructing our understanding of this hypothesized world. 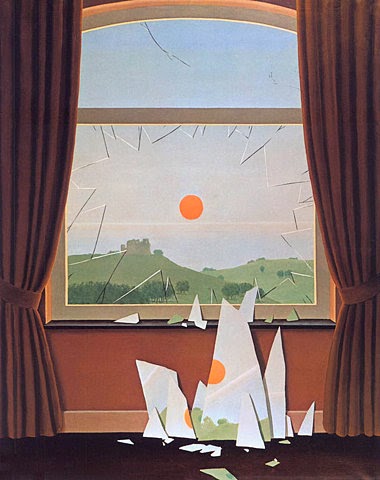 The key figure in Evening Falls (1964) is a picture window (a single pane of glass, rather than multiple panes supported by wooden separators or muntins, which can impede a view). The setting is a domestic space: the curtains are drawn back on both sides of the window and held in place with sashes; and there is a skirting board running across the exterior wall. The large pane has shattered inwards, with fragments scattered on the floor underneath the sill. However, those sizable fragments unexpectedly still hold the image that can be seen through the jagged hole in the window: a landscape, complete with castle ruins atop rolling hills in the far distance and a sun.

Contra postmodernist readings, there is, in this case, more than a hint of traditional realist epistemologies. The source of the image is available through the damaged window pane; source and image do not merely correlate, but are identical. Moreover, the upper sun is insistently centered in Magritte’s work, in the window, and in the break. It is as if the force of the real, that sun, has guaranteed not only the appearance and veracity of that representation but simultaneously ruined and frozen its apparatus.

The duplication of the landscape is, of course, analogous to the afterimage created by looking at an intense light source, such as the sun. Further, the human eye is unable to directly perceive the true form of the sun, as such a extended gaze would destroy sight. In Evening Falls, that inability is allegorized by way of the suns’ abstracted, geometric form, a modeling strikingly different from the thin, illustrative style that Magritte used in the rest of the artwork and throughout most of his long, mature period. Each disk is a perfectly circular and thick, smooth application of bright orange oil paint that sits atop the surface of the canvas, as if it could be peeled off like a sticker. This effect is strengthened by the orange, which, relative to the artist’s typically subdued and recessive color scheme, projects forward from that surface. (All of this is clearer, only when the actual work is seen in a gallery, not merely in digital reproduction.) The landscape is brightly and evenly illuminated with a light that emanates from elsewhere. 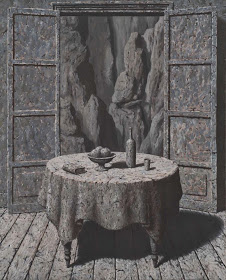 René Magritte, Memory of a Journey III, 1951 Oil on canvas (The Menil Collection)

The face of a background cliff extends all the way past the top of a set of open balcony doors in Memory of a Journey III (1951). The room’s floor, doors, and traditional still life elements -- the table, book, fruit bowl, wine bottle, and drinking glass – have unexpectedly petrified into the same craggy rock seen from the balcony.

Those boulders perilously stacked atop one another should be large, thus signaling a background in the far distance. Their color scheme and tinting, though, is almost homogeneous with that of the foreground, suggesting instead a background in the near distance. In conjunction with the absence of a horizon line, this has a tendency to flatten out the composition and is evocative of modernism’s definition of painterly specificity. This also gives the interior a sense of claustrophobia. Inside and outside are illuminated from the left by a similar, low light, as if both occupy the same compressed space.

The balcony doors would normally act as an aesthetic site, framing a view of nature and separated from that nature. In this case, conversely, nature has rushed forward from its aesthetic representation and seized the entire world. The question of the correlation – or non-correlation – of that representation vis-à-vis an objective reality is mooted. 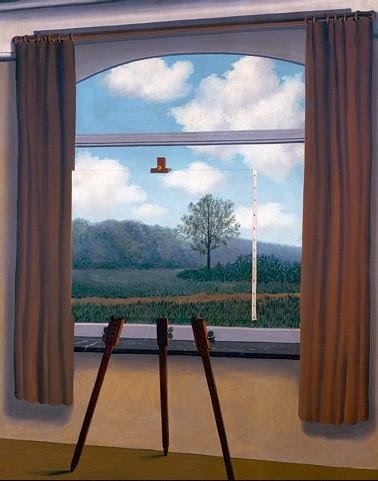 Featured in the “Mystery of the Ordinary” galleries is The Human Condition (1933). In another domestic space, a painted canvas is perched atop an easel and parallel to a picture window behind it. The viewpoint of The Human Condition is not perpendicular to those two planes, but at a slight angle from the right and at a medium distance. The stretcher’s right side – raw and white, with a row of nail heads – is visible; its left side visually, from our standpoint, overlaps the a narrow section of the left curtain. Seen through the window – those parts not blocked by the canvas centered before it – is a daytime landscape: a blue sky with clouds, a hill in the far distance, vegetation, and a foreground path. The painting-within-a-painting itself depicts more clouds and vegetation, the remainder of the path and hill, and other elements which align neatly with those of the image visible through the glass at the rear.

At first pass, then, the landscape is seemingly “completed”, hinting yet again at a realist epistemology. This completion-effect can occur, though, only from the perspective of the imaginary viewer just to the right of, and at a medium distance from, the easel; from any other perspective in the imaginary domestic space, the elements in the canvas would not align with the window’s image. Conversely, the canvas, if it was fully composed strictly from that imaginary viewpoint, would have to include the sliver of curtain blocked by the stretcher’s left side; but that is missing. So, the canvas is derived from two incompatible positions. .

As with The Memoirs of a Saint, the source of the canvas’ image exists nowhere, given that portions of the window are blocked. In that sense, the correlation – or non-correlation – of that representation vis-à-vis objective reality is again rendered as indeterminate. Further, that representation has no possible, direct referent, given its derivation from two positions unable to occupy the same place in any “real” world. This is, of course, one of the liberties long taken by painting. 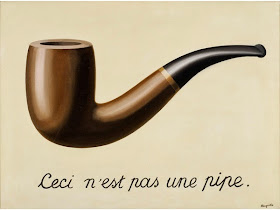 Lastly, included in the show is 1952 gouache-on-paper version of The Treachery of Images, made famous by Michel Foucault’s equally inescapable essay This Is Not a Pipe. Foucault’s little book has been crucial, particularly in the way that it elliptically gestures towards the socially constructed character of images and their disjunction vis-à-vis language, for current postmodernist readings of Magritte.

The selections in “Memories of a Voyage” are mostly distant from the concerns of such readings. Evening Falls is concerned with longstanding questions about the limitations of human perception; The Human Condition, about the history and conventions of painting. Such dialogues were present in western art long before the development of postmodern ideas in the twentieth century. Memory of a Journey III posits an alarming ossification and collapse of the human world, and representation, into the natural world. While works such as The Memoirs of a Saint manifest a skepticism akin to that of contemporary postmodern thought, Magritte’s broader oeuvre – however ubiquitous and familiar it may seem today – is heterogeneous and resists any single narrative.