No Seriously, What’s the Matter With Rice? 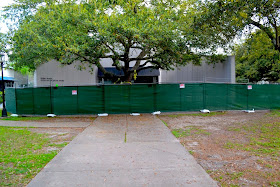 The building formerly known as Art Barn ready to be disassembled

Rice University’s recent decision to raze the Art Barn has caused quite the stir. (Well, possible razing—the Brown Foundation at present is discussing the possibility of moving the building to the Fourth Ward—because deconstructing, moving, finding land, and rebuilding is apparently a much more financially viable option than simply maintaining it onsite.) Although it has done little for the arts beyond sitting next to the Media Center for decades, proponents claim that it has symbolic and rich art historical and architectural value for not only Rice but Houston at large. While these claims may absolutely be true and the Art Barn’s demolishing very sad, as arts writer Devon Britt-Darby, Matchbox co-curator Jessica Fuquay, and Glasstire commenter Lisa Hardaway among others have made abundantly clear, this is just one incident, one symptom of the systemic failure of Rice University to take its arts program seriously.

And it’s easy for us to point finger, isn’t it? Yes, where the powers that be choose to direct—or not direct—their funding is certainly one culprit, and we’ll get to that in a bit. But the truth is Rice’s blatant lack of respect disguised as nonchalance towards the visual arts has far reaching tendrils that are deeply entrenched within the arts department as well as the greater student culture. 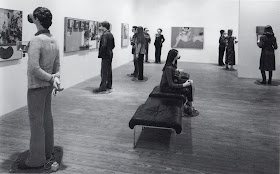 Edward and Nancy Kienholz, The Art Show, 1984 at the Art Barn (from Finders/Keepers catalog, 1997)

I’d like to start by saying that I didn’t even know what the Art Barn was until I got to grad school, nor was I aware of its dense, luxurious history and connection to the Menils. I thought it was just the corrugated metal building for Continuing Studies that happened to look an awful lot like the Media Center. Now sure, we can chalk that up to my own ignorance and lack of curiosity, but it begs the question: why is the school across town discussing, educating, and celebrating Rice’s art historical significance when Rice isn’t? Why did it take nearly a decade out of school to understand how amazing it was to be able to take a class with Thomas McEvilley? And why were there only three people in it? Why did Rice Gallery, one of the most exciting spaces in Houston, turn their backs on its students and deny them a senior show?

To be clear, Visual and Dramatic Arts department (VADA) has a lot of great things going on. When I was there, the faculty was excellent, and as people like George Smith, Bas Poulos, and Darra Keeton have retired, it seems they have found excellent replacements in Chris Sperandio and Natasha Bowdoin, and I’m sure they will find someone great to fill the sculpture faculty position. Rice’s decision to team up with the MFAH and have a constant influx of Core Fellows as adjuncts was stellar, and I can say first hand how formative that was for my undergraduate experience. But there have also been missteps within the department, like alienating probably the best lecturer I’ve ever had—David Brauer—because students complained that he graded too harshly. What the hell? Has anyone heard of Rice students filing a petition against their chemistry professor because, gee, he’s just too tough?

And this brings me to the student culture. Rice’s student body consists of the most creative, innovative, quirky, nerdy, funny, open-minded people I have ever met. This is why I found their indignant attitude towards the arts as a discipline, towards its power as an instigator of critical thought so confounding. I remember the sideways glances, the thinly veiled looks of contempt upon telling anyone at school I was an art major. I mean, how impractical is that? What kind of job would I get? And I think a lot of that doubt and even shame pervaded students within the department. It is common for students at Rice to double, even triple major, but it says something when every student in the department is a double major. In fact, I distinctly remember being the only student in my class who only majored in art. Why is that? There’s no way to be totally sure, but it certainly speaks for a lack of confidence in art’s purpose as a discipline and rigor within the department.

To be completely fair, I’m pretty old; I graduated nearly a decade ago (Martel ’05). It’s quite possible many things have changed since my time there. I hope they have, and there are obvious indicators to suggest times are indeed changing within the department. The development of grass-roots student run and alternative spaces like Matchbox and the Emergency Room have become exciting mainstays not only for the campus but for the Houston arts community in general. The Cargo Space is an innovative mobile residency, one of the very few mobile artist residencies in the country, at least that I’m aware of. Unfortunately, these endeavors were done in spite of Rice’s support, not because of it.

And that brings me back to the powers that be: what propels Rice’s blasé attitude towards the visual arts? Just ask Rice’s PR rep, B.J. Almond, and he’ll retort, citing the university’s public art program and its plans for the Moody Center of the Arts. The argument against plop art is too easy: as pretty as it is, it doesn’t tangibly affect the students and their education. The Moody Center of the Arts is a little more difficult; it’s harder to criticize an institution that doesn’t even exist yet. As exciting as it seems though, the evidence suggests that the Moody Center is more interested in garnering public attention and collecting donations than fostering an excellent visual arts program. The vice provost for interdisciplinary initiatives, Caroline Leveander, was quoted in Rice News as saying that “there’s a trend in elite higher education to build art centers on campus and raise awareness of the arts” and that “the new center should help recruit highly talented faculty and students in the visual and performing arts.” Call me crazy, but I think a good way to recruit exceptional talent would probably be to establish an MFA program for them to be able to attend. OR A BFA PROGRAM FOR THAT MATTER.

While the “Harvard of the South” continuously turns up its nose at its own artists, it is interesting to note that actual Ivy League schools like Columbia and Yale not only support their art students and faculty, they are among the best in the country. It seems that those universities are dedicated to the utmost excellence in all disciplines, not just the ones that the people running the show deem most important. So I think the real question isn’t why Rice doesn’t support the visual arts, but rather why isn’t Rice embarrassed that it doesn’t support the visual arts?

I hate to say it, but perhaps the demolishing of the Art Barn is a good thing. It seems to be shining a light on issues subsumed within yet simmering at Rice University for a very long time. Maybe this is what VADA needed: maybe this will somehow inhibit people from settling for the university’s PR placations and instead ask it to nurture its students and faculty that are trying so hard to make their program better.