From the early 1990s up until today, Lori Nix has built dioramas. She then photographs them and scraps her creations, the work thus existing solely as the photographic staging or evidence of the scene. Lush and excruciatingly intricate, each diorama takes, on average, seven months to complete. So while many artists will complete a series of work in a time span of say, a year, Nix will spend about four to five years on a single series. Several works from The City, her most recent and in-progress series, are currently on display at G Gallery in the Heights.

Throughout her oeuvre, Nix has displayed a serious preoccupation with the macabre, be it natural disasters, flirtations with death, or other subtle suggestions of violence. The City is no different: each photograph reads as a snapshot, a clue to a grander post-apocalyptic narrative. And here it seems Nix has prepared a giant gumbo pot of our basest instincts and latent desires, images that seem to either fall between or conflate the pleasure principle and the death drive. 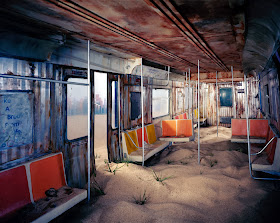 The Laundromat (2008) is one such example. It would be hard to suppress the squealing glee one would feel at the thought of reaching through the image, grasping the glass dryer doors with oversized thumb and forefinger, opening and closing repeatedly. Or slipping the miniature flannel shirt off its hanger, dressing instead one’s pinky finger, playing finger puppets with the same reckless abandon of a four year old. But it isn’t any old laundromat: it is a microcosmic representation of our ultimate and impending horror, a snapshot of our society—or rather the detritus of it—once we’ve been wiped off the face of the earth. But somehow none of it feels scary. It instead feels like a release, or even a relief that finally the world can go back to what it was doing before we were there to screw it all up. That lack of fear is probably due mostly to that sense of removal, a knowingness that this is Nix crafting and arranging models, a safe and passive witnessing of our demise. 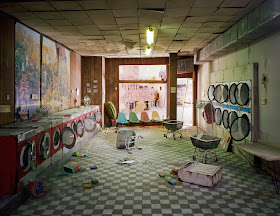 But although they are obviously models, that and we know the work only exists as photographs, the shots are all zoomed in and presented largely, telling the viewer that they are to be seen and treated as life-sized cityscapes. It’s a delightful confusion: as omniscient voyeurs eavesdropping in on the apocalypse, we aren’t sure if we’re supposed to be giants or scaled down and relegated to a surreal, faux landscape. Because of this, Nix has created a sort of revolving door of engagement, opening and slamming shut entry points into the work. It is this fluctuation that is the most exciting and generative aspect of the series. 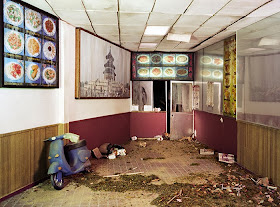 Sweetly but sickly satisfying, the gallery write-up compares Nix’s work to staring at a car wreck, albeit twenty-seven of them. And that’s the main problem of the work: yes, car accidents are entrancing and they momentarily allow us to ponder our mortality, but where does that leave us once we’ve passed the scene of destruction, only to return to our normal driving? It seems irrelevant to discuss any of the other work because they are all essentially the same piece over and over and over again. Simply swap “Laundromat” for “control room” or “museum of art” and there will still be an identical equation: cute + eerie = fun to look at. But after all, this is clearly a series and these images are obviously intended to piece together snapshots of a larger story. Can it not just be that? Is it fair to put that much pressure on the work? To ask more of it? 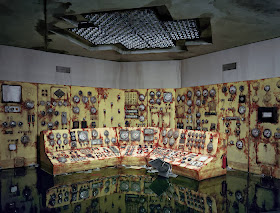 Maybe not. But it begs the question: what is the point? Shouldn’t there be more to gather from each of these photographs individually than the idea that Nix made all these different iterations because she enjoys them and they are fun? It seems that Nix has hit a nerve; by conjuring up uncomfortable human desires in a very tangible way, she has exhumed and thus revived seriously fertile territory. Unfortunately, posing the work in series devolves them into small spectacles and entertaining one-liners.