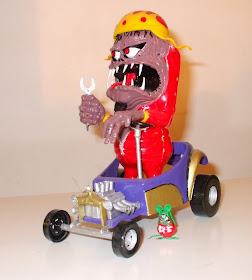 And here's Mother's Worry. (Both swiped from this "Big Daddy" Roth model webpage.) Hernandez uses things like this as his inspiration for much of the work in his current exhibit Parade at Avis Frank Gallery. I've heard Hernandez's work described as being influenced by pop culture, but this stuff wasn't just pop culture when it appeared in the 60s. It was "junk culture." It was considered the nadir, the most juvenile crap imaginable. The preadolescents who assembled Revell dragster models were assumed to be future glue heads. No one with the possible exception of the irony-filled Tom Wolfe took this stuff remotely seriously.

My, how things have changed. Of course, there are now a lot of "lowbrow" artists who mine this territory, with whole magazines (Juxtapoz and Hi Fructose) devoted to their work. But even in the sixties when Ed "Big Daddy" Roth was churning this stuff out, there were fine artists who noticed and played off junk culture in their own work (Ray Yoshida and Öyvind Fahlström, for example). At the time, they were seen as just a part of the Pop Art movement. 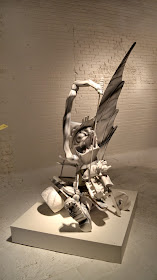 The contemporary "lowbrow" artists who mine this material are not cool ironists. They're artists who heard a whole lot of theory in college and said "fuck that noise." They are about pleasure and they don't care if it's "low" pleasure. But one of the reasons the art world accepted Pop Art in the 60s was that they believed that it was cool, ironic and at root, intellectual. And while that may have been true of Roy Lichtenstein, I think we can now safely acknowledge that Andy Warhol was a fan--he did pictures of Liz and Marilyn because he liked them. And while Mel Ramos might have been making ironic juxtapositions of sex objects and consumer products, we have to admit now that Ramos likes painting sexy naked ladies. My point is that whether they were Pop artists or Lowbrow artists, there have been contemporary artists who have been really inspired by junk culture from the late 50s until now. And John Hernandez is one of them.

Hence Out of the Pan, which at first glance appears to be a marble statue of a "Big Daddy" Roth-style monster dragster. This thing is over six feet tall. The gear shift knob has to be extending four feet from the "car." This was always a thing in Roth's artwork--gearshift knobs that come way out of the car. Hernandez has taken that exaggeration and exaggerated it even further.  Of course, it's not actually marble--it's made of wood, plastic and styrofoam, painted to look like marble. But by making Out of the Pan essentially life-size and making it look like marble, Hernandez is commenting on the cultural place of this kind of stuff. Life-size marble statues equal classical art to us. I can't think of a large scale marble statue I've ever seen outside a museum (except for Andreas Lolis's sculptures at Frieze, and they are obviously ironic in the same way Out of the Pan is). In this piece, Hernandez offers up Roth as a modern Phidias. It's an amusing piece of artistic blasphemy. 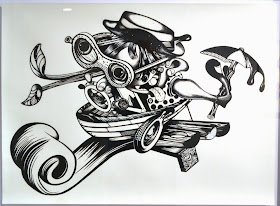 Pinocoboat shows another mutant in a Roth-style vehicle. Instead of a gear-shift knob, his appendage (I  can't quite call it a hand) is holding an umbrella. The drawing is pretty large, but it pays homage to comics artists and commercial illustrators who drew in crisp black and white pen-and-ink for reproduction on a printed page. For example, the sharp, pointed shading in the figure's hair and on the tongue-like ramp are hallmarks of a certain type of comics illustration, while the stipple recalls an older style of illustration (but one that survives on the front page of the Wall Street Journal, which features excellent portraits of news makers drawn in stipple).

But Hernandez's color version of Pinocoboat is totally different. Almost all the drawn lines are gone, replaced by intense candy coloring. The drawing really wanted to be on a printed page, but this wooden wall relief feels just right for a gallery wall. 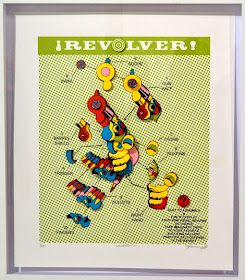 Revolver made me think that Hernandez might be influenced by the Hairy Who, particularly Karl Wirsum. The whole image has a psychedelic, 60s feel--the multi-color bullets, the vibrating red-blue vortex (labelled "SWIRL") at the center of the gun barrel. Happiness is a warm gun indeed. 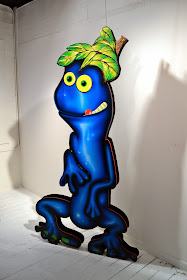 The bug-eyed figure in Blue Guitar looks completely familiar. A kids' cereal mascot perhaps? With this piece, Hernandez edges close to Jeff Koons territory. I guess this is the danger of making art out of junk culture sources. On one hand, you may end up with amusing and surprisingly thoughtful work like Out of the Pan and Revolver. On the other hand, you may end up painting a seven foot tall advertising mascot, or whatever the hell that thing is. That's why I end up feeling ambivalent towards work in this genre. There's a thin line between junk culture-inspired work that is interesting and expressive and work that amounts to valorizing trivial cultural detritus by making it really big. And work in this show fell on both sides of that thin line.