The phrase "New York Women" suggests many things, but in this case it is the name of a small exhibit of work at GGallery curated by Barbara MacAdam, an editor for ARTnews. The show consists of work by five women in a variety of media. 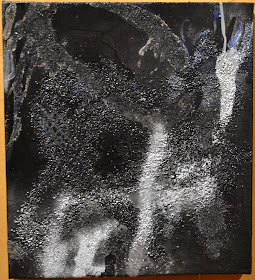 McAdam wrote a recent profile of Rosy Keyser in ARTnews. In it, she quotes curator Eric Crosby as saying that "Keyser’s work is at odds with so much painting we see today." He is talking about its energy and force, but as a general statement I think he's wrong. This work seems to fall in the general category of "new casualism" as defined by Sharon Butler. This seemed especially true in her use of what Butler calls "non-art materials." Recliner at least has a canvas underneath the sawdust, obsidian and mica that form its corroded, blasted-looking surface. Dance TV eschews even canvas. 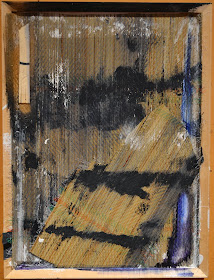 Both of these works suggest damage and even violence. Keyser's use of black implies soot and burning. The work is fully abstract, but feels like it could be closeup depictions of sites of violence visited long after the terrible events--bomb sites or the remnants of burned dwellings. The size of each of these paintings is modest, but both Recliner and Dance TV punch above their weight. These are not polite abstractions. 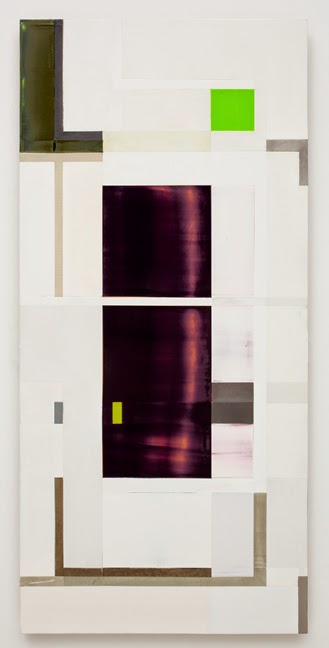 In contrast, Joan Waltemath's abstractions are quite polite--or at least they lack the violence of Keyser's. Waltemath is an art writer and her approach (at least in the paintings displayed here) is more intellectual compared with the more visceral Keyser work. It was interesting that the two artist's work were hung together in GGallery. Waltemath's three paintings are all tall and thin, filled with right angles, squares, rectangles and lines. Like Mondrian, she doesn't worry about machine-like precision--some of the edges of the geometric shapes are obviously hand-painted, and the areas within the rectangles are not perfectly flat areas of color. She combines a subtle painterliness with rigorous design constraints. The work is lovely to look at, but is provokes cool appreciation rather than an emotional response. 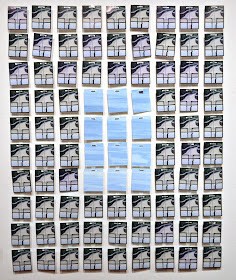 Diana Cooper's work in the show was less impressive than some of the other work. She is best known for sprawling assemblage installations, but the pieces displayed at GGallery were more restrained. I liked Road to Nowhere best. The outer photos are, as best as I can tell, a footpath. The way the path recedes and curves off to the right makes it look, for a distance, like a wave about to crash, and this effect is multiplied by repetition of the image. I'm not sure what to make of this grouping of photographs, but it is pleasant to look at. 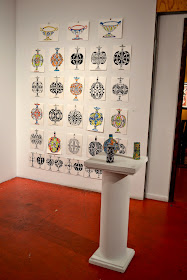 The least interesting work to my eyes was Elisabeth Kley's ceramics and drawings. The drawings themselves are designs for ceramic vases. This is work that I suspect is quite meaningful to the artist, but which doesn't communicate well to the viewer. At least, not to this viewer. The designs aren't particularly interesting. 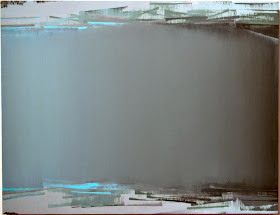 The best work in the show was a group of six paintings by Nancy Haynes. They are unabashedly beautiful. Each of them features some choppy brush strokes along the top and bottom edges of the canvas. They make a series of staccato lines that are not quite parallel to the edge of the canvas. They frame a central area of color which consists of a slow fade from left to right. The central colors are blue and brown and grey. 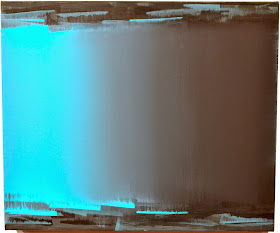 The choppy framing edges at the top and bottom, against the smooth area in the middle, come across as horizons, as if Haynes were painting a landscape with a huge looming sky. Except each painting has two of these horizons. If they were representational images of a landscape horizon, hiving one at the top and bottom would be a surreal image--but not a very exciting one. The fact that the top and bottom edged function like horizons but are abstract gives these paintings a feeling of the uncanny that we get from many of the best surrealist paintings (The Empire of Light, II by Magritte, for example). 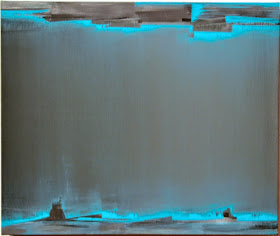 But the surrealists are not the painters on thinks of looking at these works. With their gorgeous framed voids, one might think instead of Mark Rothko. It's interesting that an artist like Haynes, whose earlier work could be quite conceptual, would flirt with the sublime (in the Burkean or Kantian sense) like this, but that is what it seems she is doing. But I can think of another contemporary painter whose work seems equally split between two tendencies: Mark Flood. Some of his work is sardonic conceptualism, some of it--the lace paintings--is beautiful with intimations of the sublime. Interestingly, he like Haynes also frequently makes paintings that surround a central pool of color with an edge. In his case, the edge is lace and the center is a void of color. Nancy Haynes is somewhere between these two Marks--which is kind of a weird place to be. But so what? The paintings struck me as beautiful. These photos don't do them justice. They should be seen in person.

I didn't come away from New York Women with any understanding of Barbara MacAdam's curatorial concept. And maybe expecting some obvious link or common aspect in these works is unnecessary. It's enough to see some work that pleases me. Why it's here is not all that important.