A few weeks ago, I was at Scott Charmin Gallery, deep in the East End, and ended up in a discussion with Emily Peacock about whether or not Scott Charmin was the easternmost gallery or art space in the Houston metro area. While Houston is pretty sprawled out, most of the art is inside the 610 Loop is a few specific neighborhoods. But as I thought about it, I thought that Kallinen Contemporary, Randall Kallinen's home/law office/gallery space on Broadway was probably further east. 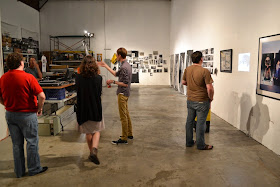 Then a week later, I was at Bill Daniel's studio in Pasadena, and Emily Peacock was also there, and she mentioned that this surely had to be the furthest east for any art space in the Houston Metro area. Daniel was hosting a photo show of four California photographers (Eric Zo, Ralph Coon, Dave Schubert and himself) called Cali Four Nication in his studio, which for the night was being called Unit K. And if you count Unit K as an exhibition space--which it certainly was this night--it is easily the furthest east of all Houston area art spaces. That I know of, at least. (All the photos illustrating this post are from Unit K and Cali Four Nication.) 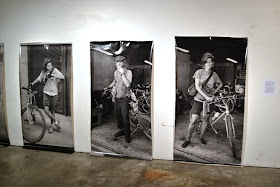 That got me thinking, what are the furthest north, south, east and west art spaces here in the Houston area? 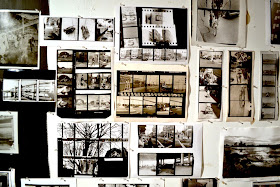 EAST: To start with, I thought Unit K in Pasadena is the easternmost art space. As far as I know there is nothing in Baytown, and then you leave the city (and don't come across any more art spaces until you hit Beaumont). But there are two problems with this. First, Unit K is not really an art space--it's a studio that got temporarily turned into an art space. So if that disqualifies it, next up is Kallinen Contemporary on Broadway by the Ship Channel. But really that is a law office that sometimes doubles as an art space. So that takes us back to Scott Charmin Gallery on the East Side. Surely that is the easternmost of all the "full time" art spaces, right? 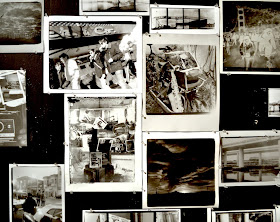 Wrong. The problem is that while we think of Galveston as being south of town, it's really southeast--farther east than Pasadena. So the furthest east art space I could find is MíArt Gallery.It's a place that I've never heard of, and seems like a gallery that probably caters to the tourist trade, like so many other Galveston galleries.

SOUTH: So is MíArt Gallery the furthest South, then? Nope, because the east end of Galveston happens also to be its northern tilting side. I was hoping the southernmost would be the Galveston Art Center (a very fine institution that brings small temporary shows by some of Texas' best artists to the island), but instead it is Affair d'Art (which is a terrible art gallery in my opinion). 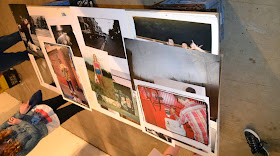 WEST: the westmost art space is pretty unambiguous--it's the Katy Contemporary Art Museum. I've written about KCAM before and will probably do so again. They haven't been around all that long, but KCAM has already mounted several exhibits, including a very nice Ibsen Espada show. And KCAM is working hard to be an all-purpose community art resource, with classes and events in addition to exhibits. 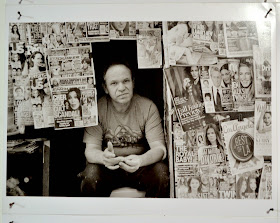 So it's definitely KCAM, right? Well, maybe. I know Blinn College has shown art at its Sealy campus and maybe in Brenham. Prairie View A&M also has an art gallery. Do we consider them in the Houston metro area? So the answer to westernmost art space depends on where we define the edge of town. Katy is obviously a part of the Houston metro. Sealy and Prairie View? I'm not so sure. 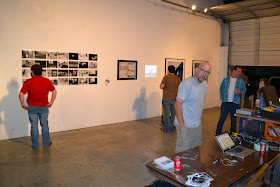 Unit K (with Ralph Koon in the blue tshirt  foreground)

NORTH: I mentioned this idea of finding the cardinal points to a group of artists I regularly have breakfast with, and they immediately nominated the Pearl Fincher Museum for northernmost art space. Not even close. Nor is the Lonestar Community College-Kingwood art gallery, which has hosted several notable exhibits and is slightly further north than the Pearl Fincher Museum. The thing is that the Woodlands and Conroe are significantly north of these two institutions but still decidedly part of metro Houston. The Woodlands has several art galleries as well as its own Art League. 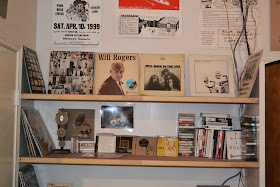 But even further north is Conroe, which also has an Art League. I have never been there, but it seems like it is worth a visit just to see its building. The Conroe Art League is located in the Madeley Building in downtown Conroe, a 100-year old office building. Who knew that Conroe even had 100-year-old buildings? I guess that should teach me to get off the interstate a little more often. There are apparently several galleries close by (including a Thomas Kinkade gallery, Gallery Off the Square), but as far as I can tell, the Conroe Art League is a little bit north of them. 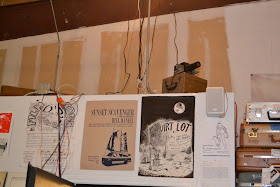 After Conroe, you get into rural areas and the Sam Houston National Forest, so I am willing to say that Conroe (and maybe Willis) are the north edge of the Houston Metro Area. That means Huntsville, with the Gaddis Gleeslin Gallery and Phoenix Commotion houses, doesn't count for this purpose. (That said, it's well-worth visiting and if not a part of the Houston Metro, Huntsville is definitely a satellite of the Houston art scene.) 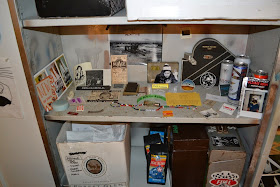 Have I missed anything? Let me know in the comments.