Lateral at the Mission

During FotoFest, I find myself getting photo-ed out. I like photography fine, but so much of it feels similar--here are some interesting images, well composed, arresting, beautiful or disturbing or thoughtful, of some intriguing or important subject matter. And here are some more. You get tired of images during FotoFest. It makes me want to put on headphones and close my eyes after a while.

So I wasn't expecting much when I went to the Mission to check out their FotoFest shows. At least it was a group show, which guaranteed variety. But my favorite thing happened--I walked in having no great expectations and walked out really pleased by what I had seen. 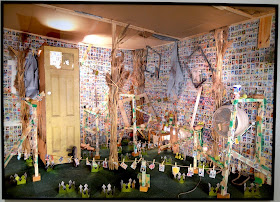 The Mission is hosting a group show called Lateral featuring 10 photographers. Bryan Zanisnik had a room to himself, creating a small solo exhibit within the larger group exhibit. Zanisnik created fairly elaborate tableaux in rooms that he either constructed or which already had an unfinished look (for example, an attic space). In this way, the work reminded me of some of Nic Nicosia's photos of constructed rooms, but Zanisnik's images are much more cluttered and visually busy. 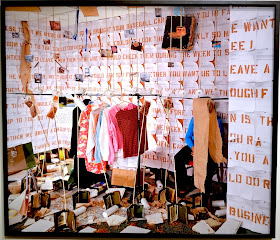 Part of that visual clutter is from what he puts the rooms he shoots, but a big part is the way he papers the walls. 18 Years of American Dreams has a wall covered with baseball cards. The baseball card motif continues in 22 Monoliths and a Rolodex, where the stuff pinned to the walls are pieces of paper (they look like printed out emails) onto which is stenciled a prose narrative about selling baseball cards to a collector.

Collections and attics and basements--it suggests the kind of person who gets involved in collecting something and storing it in underused places in one's home, until something makes the collector sell. It's a common enough obsession--I'm certainly that kind of person, and I've known many like myself in my life. The density of these images makes me think of the environments that collectors develop for their collections. A living collection is always one step ahead of anyone's ability to seriously organize it; we collectors are simply socially acceptable hoarders, if we're honest about it. 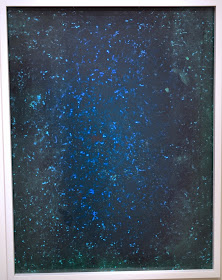 Jeremy Bolen's work in the show belongs to a classic genre, nature photography. But their all-over composition suggests something different. When I first saw them, I thought of blurry stars or maybe the flashes of light from sub-atomic particle reactions in a cloud chamber. If fact, they are photos of bioluminescent organisms taken under water. To me, the fact that I could mistake this image for something very small (charged particles) or very large (stars) when it is actually something alive suggests a thing that repeats throughout the universe. If I weren't so suspicious of the term, I might use the word "sublime" to describe what I was seeing. 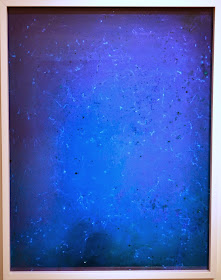 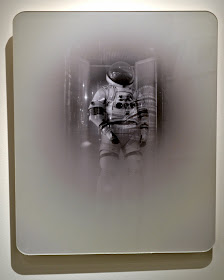 Erica Bohm's photos are intriguing in part because they include images that she couldn't have taken--Buzz Aldrin's footprint on the moon, for example. My assumption is that she took these photos at NASA, either photographing other photographs or exhibits of actual space hardware. But what she does with the photos gives them a majestic and somewhat mysterious look. Astro II is positively ghostly. Given the danger involved with being an astronaut and the high number of deaths in the profession, this haunted photo feels appropriate. 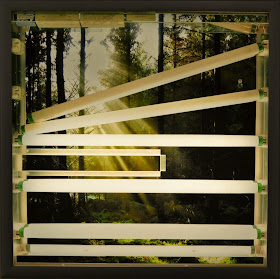 The more I see the less I grasp is a series by Jeroen Nelemans of lightbox photos seen from the back. The photo image is a somewhat generic "majestic nature" image, but what makes it interesting is the literal foregrounding of the fluorescent lights. I can't explain why (which makes me a pretty inadequate critic, I guess), but for me, the image was somehow made more beautiful seen like this. It may be partly the defamiliarization effect of seeing the mechanism normally behind the lightbox, but that seems too facile an explanation. I think the light itself shining back onto the image is beautiful. Certainly Dan Flavin found this kind of light beautiful; he was careful to not combine it with anything--just lights and walls. But why not combine it with other images? In any case, it seems to work here.

I was also impressed with the work of John Opera, Daniel Shea and Marcelo Grossman. There was a lot in Lateral to like. It runs through May 15 at The Mission.