Lonestar Explosion 2014 - Man Under Blue Board by Raindawg

Man Under Blue Board by Raindawg at the Houston International Performance Art Biennale was literally what it says, a man standing under a blue 2"x10"x2' board. It was both minimalist performance art and truth in advertising. 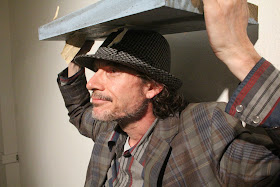 In the main gallery of Box 13 amid the other performances, Blue Board was the most compact, the least intrusive performance. It's just there. In being just there, the performance forced the audience to wonder what this silent man standing against the wall under a blue board symbolized, to wonder what would transpire and to anticipate it.

What's he doing? What's he going to do? Am I supposed to interact or intervene? Is that all? Am I missing something? 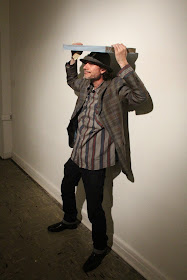 In this minimalism, the performance's philosophical and political weight built. What did it mean? Was he referencing other performance artists? Was he emulating living statue street performers? Was he alluding to early 20th century pole-sitters, ironically? Was he referencing non-violent sit-ins? Was he referencing the homeless, not the aggressive panhandlers but the passive, shy meek masses, the invisible that we (or at least I) stare past and walk past everyday? Was he alluding to people's tendency to treat each other as objects? To view each other as commodities: tools or furniture or art or entertainment? To expect a Candid Camera-Punked experience in which a cohort questions the audience about it's reaction/non-reaction? 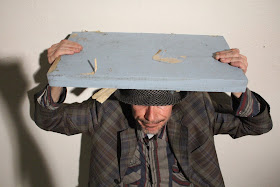