Here's What Happened to Mimi Pond 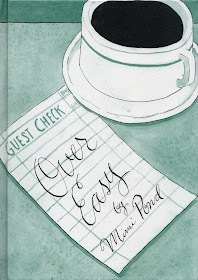 Back in September 2009, I wrote a post called "Whatever Happened to Mimi Pond?" I had been introduced to her by her husband, Wayne White, who had just built a big installation at the Rice Gallery. Pond was a cartoonist I had been aware of in the 80s but who had dropped off my radar. Not that she was not working during those years; I was just unaware of it. By the time I met her in 2009, she was working on a book about her youthful days in the late 70s working as a waitress in Oakland. She had some pages up on her blog. I couldn't wait to read it, and finally four and a half years later, Over Easy

The brief outline is that Margaret (soon to be renamed "Madge" by her new boss) is an art student. She runs out of money in her final year of art school and drops out to work at the Imperial Cafe (a fictional version of Mama's Royal Cafe). In essence, that's it. The book is as much about Madge's co-workers and boss and customers as about Madge herself, but what appealed to me is that it's about work. Work is an under-explored subject for comics. 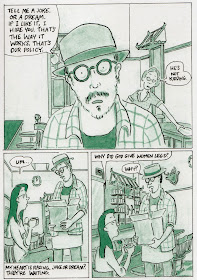 The fact the the Imperial is kind of a bohemian hangout doesn't lessen the working class vibe, but it complicates things. As I was reading Over Easy, I was thinking about Ben Davis' 9.5 Theses on Art and Class

. He wrote the following:


3.0 Though ruling-class ideology is ultimately dominant within the sphere of the arts, the predominant character of this sphere is middle class.
3.1 "Middle class" in this context does not indicate income level. It indicates a mode of relating to labor and the means of production. "Middle Class" here indicates having an individual, self-directed relationship to production rather than administering and maximizing the profit produced by the labor of others (capitalist class) or selling one's labor power (working class).

Madge is someone who is constantly escaping the working class. Her family background is working class (and her parents display flashes of class consciousness), and going to art school is a way to become middle class in the way that Davis describes. As an art student, she displays class consciousness in a funny aside on art history majors:


If I had any interest in art history before taking her class, it had been squelched by Mrs. Feiffer's dry delivery--that, and the fact that Patty Hearst had been an art history major at U.C. Berkeley, just two miles away.

Patty only reinforced my feeling that art history was a subject fit only for a spoiled debutante, someone who'd take up with a bunch of whacked-out revolutionaries at the drop of a hat. They'd finally caught her in San Francisco, during my first semester at art school.

I wondered: if she'd chosen any other major, would any of this have happened?

But by losing her grants and scholarships and grants for her fourth year of art school, Madge was suddenly thrust out of the middle-class back into the working class. She starts at the bottom--dish-washer at the Imperial, eventually working her way up to waitress. By the end of the book, she is having some success as a freelance cartoonist, which can be seen as stepping away from her working class existence as a waitress.

I realize I'm making Over Easy sound like a Marxist novel, turning Mimi Pond into some graphic novel version of Upton Sinclair or Theodore Dreiser. I think this stuff is sort of a substructure to the book, but it isn't everything. A big part of the book deals with la vie de bohème as witnessed through the characters. Madge's coworkers are poets and punk rockers (at the dawn of punk rock, when it was still quite scary to suburban moms and dads); they sleep with one another, they explore their sexuality and gender, they take too many drugs, etc. 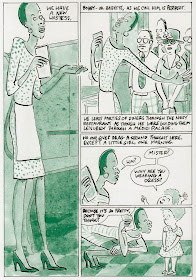 Over Easy is so episodic that it's sometimes hard to keep track of events. Time shifts suddenly, sometimes compressing and sometimes expanding. Her first day as a waitress is depicted over the course of 53 pages--about a fifth of the length of the entire book.

Over Easy reads like a bildungsroman, but the ending is inconclusive (but lovely). I wonder if that means Madge's journey will continue.
Robert Boyd at 12:59 PM
Share