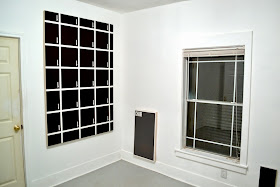 Scott Charmin's second show, Night Paintings by Guillaume Gelot, opened last night. It wasn't exactly what I would have expected after seeing his work in New Paintings by Brandon, Dylan, Guillaume and Isaiah last year. (Scott Charmin's first show featured Dylan Roberts, who was also in the New Paintings show. I wonder if that means we can expect solo shows from Brandon Araujo and
Isaiah López next?) Where Gelot's work in New Paintings had been modest in its approach and a bit self-deprecating, this work is more overtly conceptual and visually challenging. 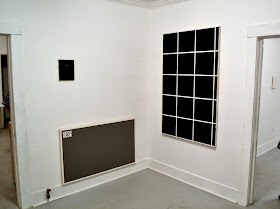 There seem to be three kinds of work here. There are works that have a nasty "fuck you" to them, exemplified by a small painting called Pure Shit that contains the very faint words "pure shit" as its sole bit of content. These paintings made me think of Mark Flood, and Gelot in fact painted everything in this show in what he described as a "shack in the back yard of Mark Flood's studio." 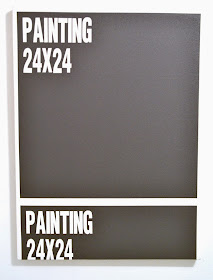 The second kind of painting in the show are a group of super-hard-edge conceptual paintings. Some, like Painting II, Desk and Chair are similar to the space holders an architect or interior designer might use to figure out where to place furniture in the room. The big grid paintings, Moon I and Moon II, also fit into this category. 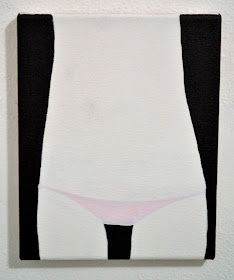 Third are the sexy paintings, Josephine I and Josephine II. These relate back to the "pussy" pictures he included in New Paintings but are more coy. In both of them, he employs a minimum of line and color to depict "Josephine". They are elegant but dehumanizing--Josephine doesn't have a face or hands. Her brains and manual skills are not important, apparently. Thin and elegant like a Cycladic figure, Gelot depicts her as a sexual object only, lacking a self. 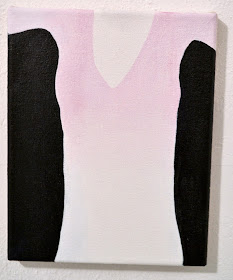 So what do these three things have to do with each other? I think they all overlap. Painting I and Painting II are kind of nasty, too, after all. They are saying "fuck you" to painting, reminding you that paintings are things meant to occupy space on a wall in a pleasant way. Your interior decorator decides you need a 24 x 24 inch square painting and orders one up from a gallery which can supply the right sized piece. 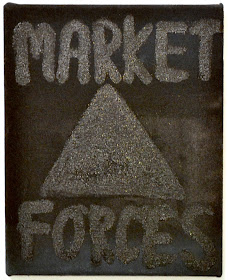 Which in turn links them to Market Forces. What is in the paintings, this exhibit implies, is not so important as long as there is a market for it. Barely visible words take the place of images and painterly virtues. And if demand for 24 inch square paintings is up, then by God market forces will answer increased demand with increased supply. 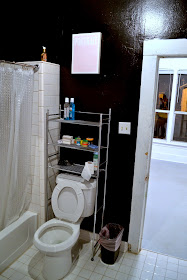 Portrait, with the word "portrait" painted in white on a pale pink bathroom seems like it could be yet another dehumanizing depiction of Josephine, and is given an extra twist by being hung in the toilet. Your Eyes may also be another image of Josephine, replacing those well-known windows into the soul with the words "your eyes." And the fact that it says "your eyes" is significant. Someone might say to someone else, "Your eyes are beautiful." This painting reminds "you" that "your eyes" are two words. Don't feel flattered. 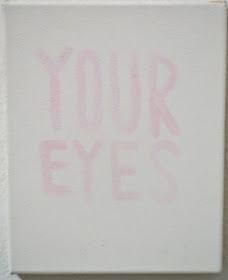 But what really links the various works is the way the show was hung. That's why I included so many installation views. The works are mostly black, white, and/or grey. Gelot's staging of them is like a graphic designer putting together a printing page. It's deft and appealing. The sense of negativity that amusingly permeates the show is somewhat mitigated by its handsome installation. 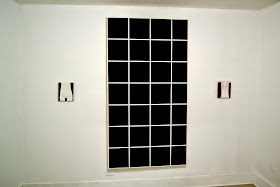 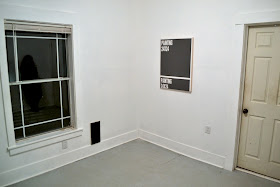 So a show with paintings like Pure Shit, Dark Lands and Darkness ends up being about installation design, and the relationship of the fairly minimal work with the humble architecture of the Scott Charmin bungalow. Minimal painterly means? A strong dialogue with the architectural setting? This is starting to sound a little like Minimalism. It's almost like you aren't in an exhibit of individual paintings but are instead in a minimalist installation. The architecture is as much a part of the work as the paintings. The gridded windows looking out into the black night are as much a piece as Dark Lands, Chair and Painting II.  I assume this was Gelot's intention, but I don't know. Either way, it's striking and it works.

Night Paintings by Guillaume Gelot is up at Scott Charmin through May 9.
Robert Boyd at 4:18 PM
Share