[When Pete Gershon wrote Painting the Town Orange: The Stories Behind Houston's Visionary Art Environments (which we reviewed last week), one chapter dealing with four Houston artists had to be excised for space reasons. Gershon has graciously given us permission to publish the chapter as four separate blog posts on The Great God Pan Is Dead. This is the final post. Please check out the first post about Grace Bashara Green, the second about David David Smalley and the third about Dolan Smith's Museum of the Weird.] 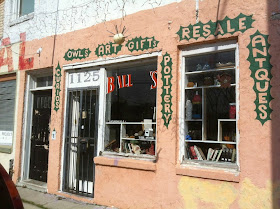 “Every shopkeeper is an artist,” proposes Bill Davenport. And while he may not be Salvador Dali or Andy Warhol—both of whom designed store window displays—I can’t help but be impressed with the arrangement of clutter that fills Bill’s Junk, his 11th Street storefront. “Store display is a form of art, and I suppose junk stores have more flexibility than most. The kind of things I deal in are second-hand objects, so as you can see, I have a lot of scope of how I can arrange things.” The walls and shelves are filled with some twenty years’ worth of Davenport’s scrounges from the flea markets, yard sales and trash piles of Houston.

A painting of a goat-headed demon embracing a naked woman as New York City erupts in flames behind them immediately catches the eye. Here’s a tiny block of wood painted to look like an electric range resting on a leather-bound scrapbook stuffed with articles on infectious diseases. Beside it are some unusual rocks, plastic dinosaurs, one of Dolan Smith’s scars, and a twist of sparkly pipe cleaners made by a friend of one of Bill’s pre-teen sons. Its tag reads: “cybernetic organism - $22.”

“Okay, maybe that one’s a bit overpriced,” allows Davenport. “But then again, for a cybernetic organism, it’s not a bad deal.” There are stacks of used CDs and boxes of weird stuffed animals and an array of misshapen ceramics, the forlorn school art projects of decades past. It’s not too far a leap from the display found at Cleveland Turner’s house, a whirlwind of junk with no rhyme or reason to its placement except for one man’s aesthetic instincts. 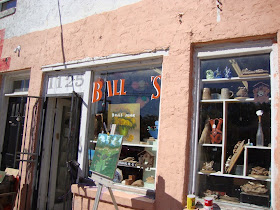 It’s become perceived of as something of an art installation within certain circles, owing to Davenport’s background as a sculptor who uses the most modest materials, but that wasn’t the original intent. In 2006, Davenport and his wife, the painter Francesca Fuchs, purchased the 4000-square-foot building at 1125 11th Street. Built back in the 1930s, for some seventy years it functioned as a fleabag flophouse, with a series of what Davenport terms “sad, pathetic businesses” downstairs: a procession of barbers, lunch counters, and most recently, a ramshackle party supply store. The latter’s window painting has been modified, transforming the word “BALLOONS” into “BI LL ‘S”. Davenport himself spent sixteen months renovating the structure from top to bottom, moved his studio into the back, made an apartment for his wife and two boys on the second floor, and pushed his surplus objects into the storefront.

“Sure, people buy things,” he says, “but there’s never been any thought about whether something was saleable. I don’t make any money doing this. I just don’t want this stuff in my studio, so I’ll just put it up here and maybe someone will take it. I’ll tell you what does sell quickly: dead insects. Dead bees, moths, you display them properly and they never last more than a couple of days.” 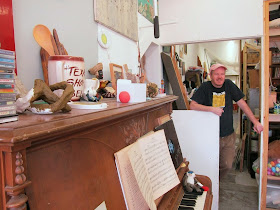 Bill Davenport and some of his junk for sale

Davenport, who was born in Greenfield, Massachusetts in 1962, picked up art degrees at the University of Massachusetts and Rhode Island School of Design. After graduation he taught a wood shop class at a Quaker school in central Massachusetts but moved to Houston in 1990 when he was invited into the Glassell School of Art’s Core Residency Program. He reaches into a cabinet and produces an example of the kind of sculpture he made at Glassell. It’s made from five small, unpainted scraps of wood, some with angled cuts, glued together.

“I’ve always made things that looked like people’s bad shop projects and then put them into gallery settings,” he says. “People get mad because they’re so badly made.” Shaila Dewan summarized the general attitude toward Davenport’s work in the tagline to her 1999 Houston Press article, "The Antihero: Is Bill Davenport’s art stupid? Yeah. Brilliant? That, too.”

He shows me another project from his time at Glassell. It’s a small wooden box, painted Pepto-Bismol pink, entitled Counter. I imagine how sensual and luxurious the textures of its sloppily applied paint and its badly fitted joints must have looked under bright gallery lights. “It’s very much a conceptual piece. It’s about making the piece, and the desire to make it. The things that I love the best are things where people worked really hard to do something they don’t know how to do, which for me is what all great art is. Sometimes they come up with something the most highly trained artist couldn’t accomplish.” 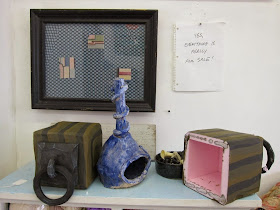 Yes, everything is really for sale!

To illustrate his point, he points to a yard sale painting hanging in a corner near the ceiling, an unassuming landscape depicting a sailboat on a mountain lake. “I mean, look at old Mr. McKenick here,” Davenport says. “Some of the things he did here, the boat, this tree over here, didn’t really work, or they’re pretty commonplace. But then you get to those mountains in the background, and you’re like, wow, that’s better than just about anything you can imagine.”

Davenport went on to teach classes in sculpture, painting, art history and art appreciation at just about every school in the Houston area, along the way working with painting, crochet and large-scale outdoor sculpture as his preferred mediums. A bin on the curb in front of the store is filled with one of his current sculptural modes—mystery objects, wrapped in newspaper and wound with colorful yarn. A price tag dangles from each, for example: “Object that could bring you luck - $3”.

His work is handled by Houston’s prestigious Inman Gallery and he’s equally well-known for his daily blog updates for the Texas art website of record, Glasstire, for whom he’s written since 2001. When he opened Bill’s Junk in 2008, a steady stream of friends and strangers came to browse. Then one day, Toby Kamps walked in, and asked him if he’d be interested in recreating the store for an exhibit he was curating at the CAMH called No Zoning.

“Up until then it wasn’t an art project,” says Davenport. “I had a lot of fun arranging stuff, yeah, but it wasn’t art. I mean, it was art, but I wasn’t thinking of it like that. It was a case of a curator making the art by designating that it was. I had to think really hard about whether I wanted to do it.”

Davenport accepted the invitation, but he admits it was with mixed feelings. “It was a bit of a crisis. You’re an artist. Important curator comes to your studio, and he doesn’t want your art, he wants your junk. What do you do with that?” In this case, he went with the flow, and replicated his shop within the CAMH’s gallery space, selling thrift store art, decorated sea shells and macramé owls to show-goers—in fact, eager buyers emptied out his store three times before the exhibit came down. The process had come full circle. Not only was the collection of cast-off materials art; now so too was the act of its resale. With Bill’s Junk, Davenport was making a sly (and possibly inadvertent) commentary on the art’s commercialization.

“From a critical point of view, you could say his work with Bill’s Junk is an important turning point for this kind of site work,” says architect Cameron Armstrong. “When an artist creates a space like that and then turns the process around, turning the accumulation into a dispersal, and that dispersal becomes its meaning. I think that’s amazing.”

Armstrong says, “the things we’re talking about, this all comes up right out of the soil of Houston.” He shakes his head and adds, “You’re going to have a hard time explaining all of this to outsiders.”