Recently they tore down and rebuilt Frostwood Elementary, which I attended from kindergarten through fifth grade. The new building is very nice, although it feels a bit grandiose. The new playground, on the other hand, is an obscenity! When I was a kid, they had steel monkey bars and jungle gyms and several very excellent climbable trees, and I'm sure these were the cause of many a broken arm and bitten tongue. And beyond that, we kids built our own "playground equipment" in the wooded playground; we made increasingly large bike ramps (we were enthralled by Evel Knievel) and forts made of twigs, vines and pine needles.

Later they replaced the steel playground equipment with some very lovely wooden equipment that seemed a lot safer for kids, but still provided plenty of opportunity to climb, fall, cry, and get back up to climb some more. This stuff has been replaced by new playground gear made out of cheap ugly plastic with no sharp edges. And more freakish is that it is not set on good clean dirt but instead surrounded by a spongy rubber material, so that when junior falls off, there is no chance of scuffing or bruising.

I was thinking about this transition when I saw Sharon Engelstein's new sculpture group, Dillididae, in Hermann Park. This is part of Hermann Park's Art in the Park program that has been installed as part of the park's centennial, which I've written about before. 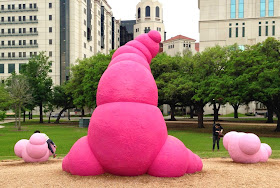 From a distance, these blobby sculptures resemble Engelstein's great inflatable sculptures. As I drove by, I wondered how they were going to maintain inflatable sculptures in a public park. But they're actually made of concrete and are literally solid as a rock. But despite their rock-like nature and the lack of spongy rubber ground, kids were climbing on them during the dedication ceremony. 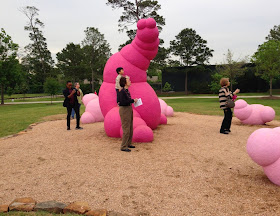 The pieces look like worms or bugs. The name, Dillididae is short for armadillididae, the scientific name for doodle bugs. When I posted a close-up of the central pink figure's "foot" on Instagram, people identified it as looking like a Kong chew toy for dogs. They definitely seem like cute, weird organisms, not just abstract shapes. 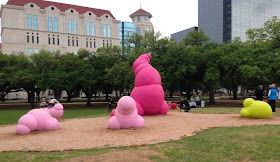 But kids seem to see these things as things to climb on. And why not? The sculpture is adjacent to the Buddy Carruth Playground for All Children. A six-year-old is not going to make a distinction between art and playground equipment. Not while there is fun to be had. 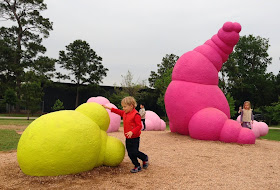 One of the issues facing public art is its relationship with a public that is not necessarily looking for art. Public art has to be multivalent to be effective--it can't just be an art object. While Dillididae looks like it was literally plopped down into the park, I think it avoids being stereotypical plop art because children will have a significant non-art relationship with it. 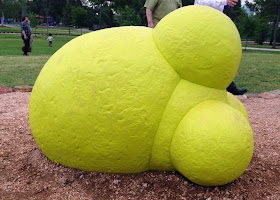 But perhaps its most subversive aspect is that it does an end-run around the trend of litigation-proof super-safe, super-boring playgrounds. It doesn't have to be surrounded by a rubber mat because it's not actually part of the playground. The pieces don't have to meet the guidelines spelled out in the Public Playground Safety Handbook because this is a sculpture group, not a playground. I don't know if it was the artist's intention to create sculpture that kids could play on, but I would be surprised if that weren't part of the plan.

The park has a contract to display Dillididae for three to five years. I hope that once they reach the end of the contract, it will have proven so popular with kids that they decide to extend the contract indefinitely.