Paintings and Drawings at Art Palace 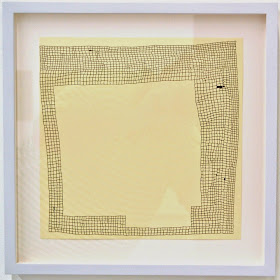 Art Palace has a reputation for showing art in non-traditional media by such artists as Jim Nolan, Linda Post, Charlie Morris, the Bridge Club, etc. But their current exhibit, Wabi Sabi, goes back to art's old favorites, painting and drawing, and even dares to dally with that old aesthetic whore, beauty. Jamie Davis resists the temptations of beauty, preferring humor instead. Unfinished Graph Paper reminds me a little of the Art Guys. 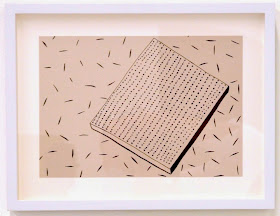 Davis is a 2014 UH MFA, and her work is pretty damn unassuming for someone with years of art education. In both Unfinished Graph Paper and Purdae Peg Board, she takes things that are normally quite precise (carefully designed and then manufactured by machines) and gives them a humorously clunky hand-made look. And not just hand-made; they're crudely made. They reminded me of the way Philip Guston drew buildings. Guston, too, made humorous, crude-seeming images. Davis' work at the thesis show at the Blaffer was fairly conceptual, which is kind of boring to me. I'm not familiar with her work as a whole and I don't know what direction she's going, but as Guston demonstrated, there are still drawings to be drawn. Purdae Peg Board suggests that this might be a fruitful direction for Davis. 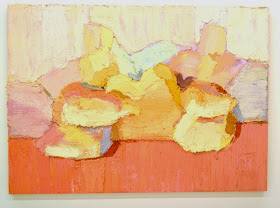 Amass is the largest piece in the show. It's one you have to see in person to get the full effect. For one thing, I think the image above darkens the painting a bit--it is quite creamy and pale in person. But more important with all of the Michael Villareal pieces in the exhibit is the sculptural thickness of the paint. 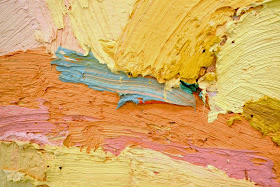 Villareal is one of the impasto boys, slathering the paint on with a garden trowel. That automatically makes one think of Geoff Hippenstiel, but Villareal's style--more or less flat areas of color representing highly abstracted figures--is very unlike Hippenstiel's more expressive work. In the abstraction of the figures, Villareal reminds me of Howard Hodgkin. In his thick application of flat colors to form the figures, the work recalls Wayne Thiebaud. Since these are two of my favorite painters, I approve. But admittedly, no artist wants to someone whose work reminds you of someone else's work. 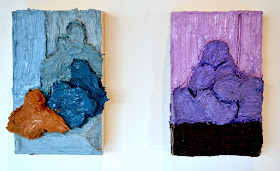 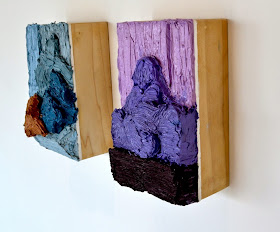 Still, it is interesting to me that there are several regional painters working in a mode of extremely thick impasto--Villareal, Hippensteil, and Julon Pinkston off the top of my head. Such an approach certainly emphasizes the objecthood of a painting while remaining part of the tradition of painting. As someone who loves painting but worries about its relevance, this seems like a useful approach to me. But more important, Villareal's work is gorgeous visually. 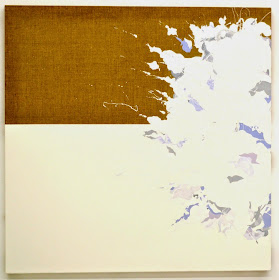 Dallas artist Kirsten Macy does paintings that look like highly graphic depictions of explosions of some kind. My first thought was of a cream pie hitting someone's face, but I guess they look a bit more like bombs going off. But the extreme whiteness of the explosions is very creamy. The backgrounds show a horizon line and not much else. The colors are poster-like in their flatness but quite pale. Looking at these pictures, I don't imagine the roar of a Hollywood-style explosion, but instead a faint "pop."

The paintings seem mainly like formal exercises with various combinations of formal elements. YOu have a horizon and an air-burst--where do you put them in relation to one another and to the edge of the canvas? How big do you make the image of the explosion relative to the canvas?

But at the same time, these unassuming explosions might remind one of how we think of our distant wars. The explosions in Afghanistan or Pakistan of Yemen that destroy so many lives and sow so much terror seem to us, by virtue of distance and our finely honed ability to tune out unpleasantness, at most like faint, distant "pops". Perhaps these paintings reflect that. 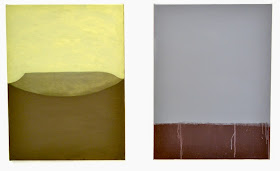 Ludwig Schwarz recently had a "retrospective" at the Oliver Francis Gallery in Dallas consisting mostly of found objects claimed by Schwarz over the past 25 years. His website is a series of humorous, enigmatic videos and images. But despite his post-painting practice, he still puts paint on a flat surface--oil on canvas, even--just like Rubens or Kandinsky did. Schwarz's anti-painting practice was addressed by Bill Davenport in Glasstire: "It’s worth noting that, since 1995, Schwarz has been a prolific producer of paintings, or rather, of flat, painted canvases that struggle mightily and unsuccessfully against painting as a way of consuming artistic ideas. He’s made paintings that face the wall, paintings which can only be seen only on the Internet; paintings packed away in unopened crates; and paintings notable for their intentional unappealing vacancy." 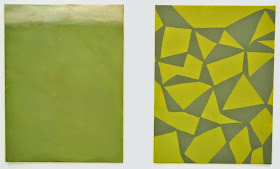 But if you didn't know about Schwarz's other activities and walked into Wabi Sabi, you would come to a diametrically opposed conclusion. The series of five identically-sized paintings here are not unappealing in any way. Their "vacancy" recalls Rothko or various minimalist painters--it certainly doesn't come off as an anti-painting gesture. On the contrary, it feels like it belongs in the continuing tradition of painting. Ludwig Schwarz is hardly blowing up the tracks of the art history train here. Instead, he's boarding the train. And these generally calm, minimal paintings fit in well with the general demeanor of the entire exhibit.

Wabi Sabi runs through May 24 at Art Palace.