I stole the title of this post from a great book by Bart Beaty. Comics Versus Art

, dealing with the relationship between the world of comics and the artworld, is required reading if you want to think about these two things together. But it's not the last word since comics and art keep on going. For instance, this month Artforum turned its gaze on comics. Why not? Summer is the slow season. Everyone's on vacation. The New York galleries are full of second stringers from the provinces. Anyway, every few years the art slicks turn their attention to comics. It's been like this since the late 60s. 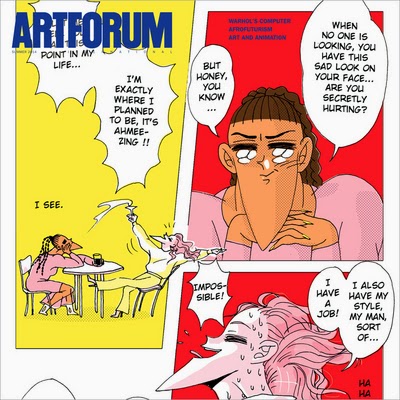 Artforum, Summer 2014. Cover from "I Am My Goals" by Julien Ceccaldi.

One of the essays in the special section on comics, "Wonder Worlds" by Stephen Burt, covered some of the same ground as I did in the previous post, particularly discussing Thierry Smolderen's The Origins of Comics: From William Hogarth to Winsor McCay

. There was a curated section by Art Spiegelman showing the comics that have been meaningful to him after a lifetime of thinking about the subject. Among other things, he discusses the Heta-Uma ("unskilled-skillful") movement in 1980s underground manga, which parallels a tendency in North American comics starting with artists like Gary Panter and Mark Beyer in the late 70s and early 80s and which continues until today.

But in a way, there is something rather old-fashioned about this comics section. It touches briefly on the most recent trends in comics, but it seems obliged to educate Artforum's readers on the totality of comics-as-art--a task too big for one section in one issue of a magazine. (Comics from outside North America, for example, are barely discussed.)

In The Comics Journal, there was a brief exchange about the issue between Paris Review managing editor Nicole Rudick and Comics Journal editor Dan Nadel. Rudick wrote:

I imagine this will get lost in all the comments about comments, but the comics section in the Summer issue of Artforum is pretty terrible. If you’re interested in reading about a specific strain of comicsmaking positioned as the history of all comics, then you’ll love it. It’s absurd to try to describe the history of a medium in a few pages, with a handful of representative examples. Would they have taken the same tack with, say, the history of literature, or the history of art?

Nadel (who was mentioned in glowing terms in the essay "Disreputable Sources" by Fabrice Stroun in the special section) replied:

Yep, that issue is an epic disaster. I was fascinated by how aesthetically conservative it is and how blinkered in its scope. That issue could have been published in 1990 or 2000 and not changed much at all. Ah well. It’s not as though the recent book length overviews of the medium are much better.

Rudick and Nadel are two of the most important public intellectuals about comics, so their disapproval really suggests that Artforum really dropped the ball. I am more in agreement with Rudick than Nadel, but Nadel has a point about the out-of-datedness of the section. The Spiegelman-centric feel of the section speaks to Nadel's complaint. Spiegelman is obviously one of the most important artists and editors in the world of comics-as-art, but his signal achievements, Maus and RAW, were done decades ago. 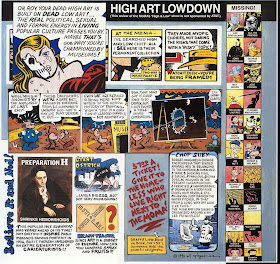 I was astonished and disappointed to see Artforum reprint a strip he drew for them in 1990 criticizing MOMA's High & Low: Modern Art and Popular Culture. Talk about beating a dead horse. The point is that comics being produced right now are contemporary art no less than the artists whose exhibits are reviewed in the back section of the magazine. If Artforum treated these comics as contemporary art and covered them regularly (as they do with film), they wouldn't end up attempting (and failing) to cram the entire art history of comics into a few pages every few years, as they have done here. 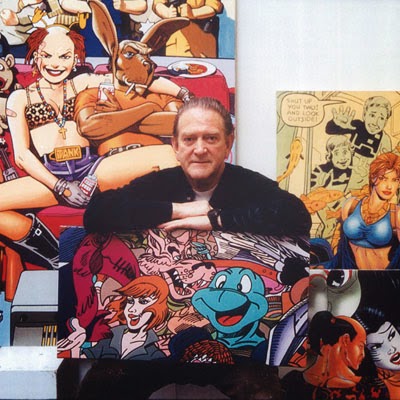 Erró posing in front of Tank, which is mostly an image by Brian Bolland reproduced without credit

And speaking of art versus comics, score one for comics in a battle between Brian Bolland and Erró. Erró is an artist who employs appropriation and collage in his work. The work strikes me as amusing at first glance, but a little goes a long way. For one piece, Tank, he took a "Tank Girl" painting by Brian Bolland and combined it with what looks like some Red Chinese propaganda art. OK, Bolland is hardly the first artist to have his work appropriated. But he was annoyed to find that a signed poster of Erró's appropriation was selling for 600 Euros at the Pompidou Center gift store. He wrote an open letter that is worth reading in whole (it has been reproduced on the comics site Bleeding Cool), but here are a few choice excerpts:


You consider yourself “a kind of columnist or reporter”. Reporters quote their sources all the time in order to get at a greater understanding of events. Their reports, like your work, are made up almost entirely of quotes. The difference between reporters and you, Erró, is that they name the source of their quotes and an honest reporter would be careful not to misrepresent his sources or take their quotes out of context.

What this is is a kind of colonialism. You, Erró, have found a place for yourself in the land of the Fine Art Elite, in “Gallery-land”, and you have gone out and discovered a dark continent inhabited by pygmies – barely more than savages really – people with a colourful but primitive culture. Like the Victorian explorers you find what they do ghastly but somehow alluring so you steal from them, give them nothing in return and dismiss them.

So what happened?  Erró's agent wrote back the following:


Sir
Following your email, we have decided to no longer sell this edition “Tank”. We have made 20 copies, we sold three copies, we have given 5 copies to Mr. ERRO.
We’ll give him the 12 remaining copies. 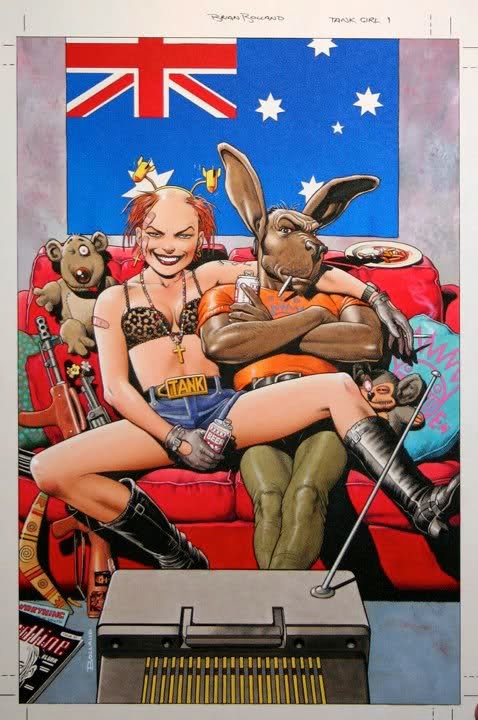 Brain Bolland's original Tank Girl painting, which was used for the cover of Tank Girl: The Odyssey #1 in 1995

In 9.5 Theses on Art and Class

, Ben Davis said that the difference between fine artists and commercial artists is that fine artists are essentially bourgeois while commercial artists were working class. This has nothing to do with their respective incomes or wealth, but with their autonomy as creative people. If you agree with Davis's formulation, then score one for the working class!
Robert Boyd at 3:06 PM
Share