As always, Lawndale’s The Big Show is a giant conglomeration of artwork from a wide array of artists, the only real commonality among them being that they are from Houston. Many familiar names like David McClain and Elaine Bradford crop up year-to-year, but then again we get to experience a slew of fresh talent that we might not have seen otherwise. As overwhelming as the exhibition can be, it’s also a lot like hunting around a flea market: it is enticing to think there could be a hidden gem lurking right around the corner. Juried and curated by Erin Elder, Visual Arts Director of the Center for Contemporary Arts, Santa Fe, this year’s exhibition is much more subdued and even-keeled than Duncan MacKenzie’s selections last year. However, with 115 works by 106 artists, there are undoubtedly wide ranges of media, concepts, themes, and pieces to consider. Without further ado, here is my top ten:

10. Torie Shelton, Wonder & Curiosity, 2014
Walking up to Torie Shelton’s Wonder & Curiosity, it was hard to suppress the Oh Christ not another curiosity cabinet groan gurgling in my throat. But the “needle felted specimens” that she’s filled her cabinet with are well crafted, childlike, and incredibly sincere. Frankly, I wish Frippo was my friend, and Squirrelephant looks like a curmudgeonly old man who wants me to get the hell off his lawn. 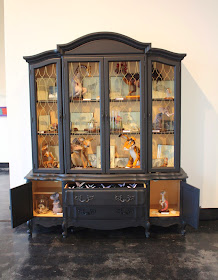 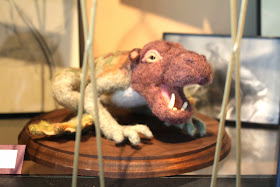 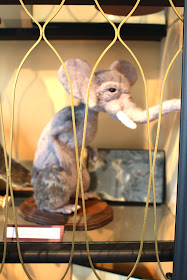 9. Michael Sean Kirby, Caerulia, 2014
Michael Sean Kirby’s Caerulia looks like a stone from the future. It doesn’t look like it came from the actual future, though, but instead a shitty B-movie from the 1960s depicting the future. Sexy, sleek, cheesy, smooth, nostalgic, distant, and cold: Kirby manages warmth and evasiveness all at the same time. I have no idea how to feel around Caerulia, and that is precisely why it works. 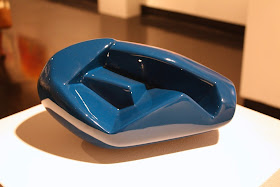 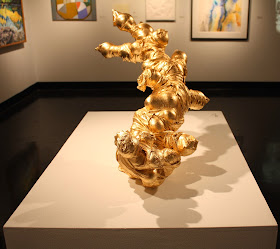 7. Vincent Fink, Curiosity (2), 2014
Vincent Fink’s Curiosity (2) at first glance looks like a run of the mill urban scene: concrete, an apartment building, clothesline, and a chain-link fence with a cautionary sign comprise a tall, skinny acrylic panel. But things quickly get weird as six parrots perch atop the breast pocket of a giant office shirt as an oblivious origami cat, sitting next to an errant Gatorade bottle, stares quietly off into the distance. With vivid colors and tightly controlled surrealist moments, Curiosity (2) feels like a wistful daydream.

6. Leticia Garcia, Mourning, 2013
Speaking of control, it is immensely difficult to maintain it while attempting to convey sadness and loss. Yet in Mourning, Leticia Garcia does so expertly. A subdued figurative painting teetering on abstraction, Garcia depicts a crowd of people gathering for what looks like a funeral procession. Foggy, elongated figures feel like they are crying as a murky, torrential sky looms above. 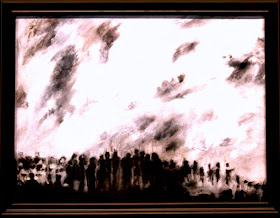 5. Luisa Duarte, You Are Not Stronger Than Me, 2014
We all make plans. Sometimes we make lists, or share them with friends, or opt to simply keep them in our heads. With collage in the form of geometric abstraction, Luisa Duarte plots a coup. We don’t know who it is that’s stronger than her, or what it is she thinks she needs to overcome. But it is easy to root for these seemingly mundane white squares as they propel themselves off platforms, or hold our breath as a clunky white car nearly plummets Thelma and Louise style into an orange ravine. 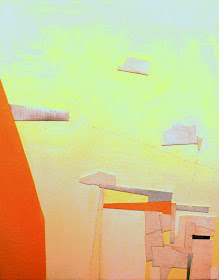 4. Mack Bishop III, Earth Child 1, 2014
Mack Bishop’s Earth Children look like a couple of infantrymen having a side meeting away from their drifter army of shards and trash. But even with glass horns and wire fists, short and pudgy Earth Child 1 looks as though it’s just as likely to play catch in the back yard as it is ready to go into battle. It may be a little silly and dumb, but here Bishop makes a compelling case that not every artwork needs to be smart. 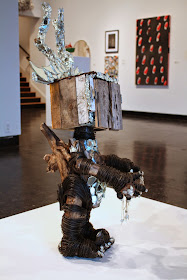 3. Adair Stephens, Going Dutch, 2013-4
Whether it’s the first date or a twenty-five year relationship, shared silence can be tense. With Going Dutch, Adair Stephens shows a young couple fumbling, looking upward in opposite directions, each seemingly clueless as to how to move the conversation along. Heavy, self-deprecating brush strokes, nauseating skin tones, and a disorienting corner make this piece equally vulnerable and claustrophobic. 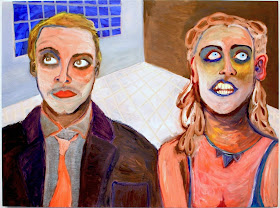 2. Caroline Sharpless, Between Pine and Grief, 2014
This dull, deadpan painting of a home interior by Caroline Sharpless feels thick, burdensome, and ominous. Mid-afternoon sunlight peers in through an unseen window, as a background staircase leads to places, or situations, unknown. It is as incriminating as it is innocuous, as if we are glancing at a foreshadowed moment, or a ghost. 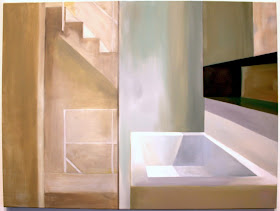 1. Christopher Wallace, Haunted House, 2013
Unlike Sharpless, Christopher Wallace doesn’t see ghosts as ominous—but he does think they are assholes. As much as he seems to hate them though, they are lovingly rendered everywhere in Haunted House. Skeletons, angels, and walls with faces pop up at every turn in a drawing bursting at the seams with imagery. Residing somewhere between an extravagant doodle and a densely layered mind map, I could spend hours poring over Haunted House, trying to piece together what exactly it is going on in Wallace’s head. Also, it’s hard not to love a work that references Dan Havel and Dean Ruck and a NASA Lego man. 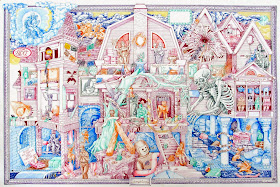 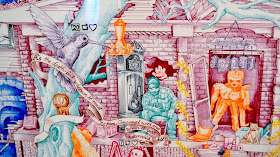