Books About Comics: Heroes of the Comics and Ed vs Yummy Fur 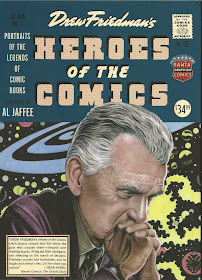 Heroes Of The Comics: Portraits Of The Pioneering Legends Of Comic Books (Fantagraphics Books, 2014) by Drew Friedman. There is a nice irony in the title of Drew Friedman's new book. For many, the "heroes of the comics" are figures like Batman and Captain America--fictional characters who have become over time little more than corporate brands, cash-flow generating properties, occasionally revitalized by the "talent" that gets parachuted in to inject new life into them and thus to perpetuate--in a legally-binding sense--the companies' valuable trademarks. Friedman, on the contrary, has always been interested in the grungy side of the entertainment business (his past books have dealt with z-grade celebrities and borscht belt Jewish comedians), and this book continues this obsession by focusing not on the superheroes and funny animals that typified comic books of the 30s through the early 60s, but on their creators, who were paid peanuts by crappy publishers to create some of the most enduring characters in American popular culture. 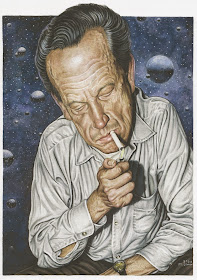 Drew Friedman, portrait of Wally Wood from Heroes of the Comics

And even given this premise, "heroes" is an ambiguous word. Many of these figures were not "heroes" but journeymen, just doing a job the best way they knew how, and some of those in the book fall more on the villainous end of the spectrum! But Friedman treats them all more or less equally--a full-page portrait facing a brief, one-page biography. What the reader is left with is a powerful sense of how the comics were the result of actual people whose own stories are worth knowing. Friedman honors these artists, writers, editors and publishers by giving each of them a beautifully rendered portrait in high Friedman style. 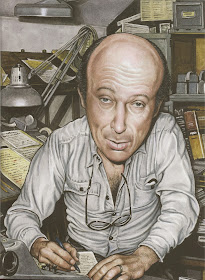 Drew Friedman, portrait of Harvey Kurtzman from Heroes of the Comics

And the book includes many portraits of artists I consider to be real heroes of comics, including the three pictured here--Jack Kirby (on the cover of the book), Wally Wood and Harvey Kurtzman. Why are they heroes while astonishingly talented artists in the book like, say,  Russ Heath and Mort Drucker are not? Because they had a vision for comics as a means of artistic expression, as something more than a mere entertainment product. Their visions were consistently thwarted throughout their creative lives by the demands of the market, by censorship, and by a public that wasn't ready to accept comics as art--they are each tragic heroes in their own way. All the more reason to honor them.

The world of contemporary art has abandoned many of the old functions of art, of which portraiture was a primary one. It's now left mostly to photographers. But there are still a few great illustrators who choose to honor their subjects with psychologically intriguing representations done in pencil, paint and occasionally pixels. In addition to Friedman, I think of Brooklyn Rail publisher Phong Bui, for example. Portraits of the quality that Friedman does here are real tributes to their subjects. They aren't commissioned portraits of some rich guy--they depict persons from a history that is meaningful to Friedman. And that's at least part of why they are so good. 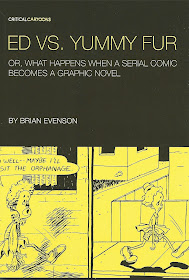 or Weapons of Mass Diplomacy

just appear on the shelves, complete unto themselves. This used to be pretty much unheard of. There were comic books and comic strips and book collections or graphic novels barely existed. When Chester Brown, one of the key cartoonists in the alternative comics movement of the 1980s, started his comic book Yummy Fur, it was first as a self-published zine and later as a traditional 24-page comic book. The comic book commenced publication in 1986, reprinting the contents of the mini-comics initially. He continued the comic book for 32 issues, then started a new title, Underwater which ran for 11 issues, followed by Louis Riel, which lasted 10 issues. Material from these various comics was collected into five book collections. For his latest book, Paying for It

, Brown skipped serialization and published it as a complete whole--this has become pretty typical for art comics. The age of the "comic book" is pretty much over for art comics.

When Chester Brown started Yummy Fur, he saw it as an open-ended comic about his protagonist, Ed, that he might continue indefinitely--not unlike a mainstream comic like Spider-Man. He thought he might occasionally collect issues into self-contained stories, but while doing this he would continue Ed's serialized adventures, as Hergé did with Tintin. In short, he started off with two older models of comics publishing in mind just a few years before those models started to come apart. He eventually published a definitive version of the "Ed" story from Yummy Fur called Ed the Happy Clown: a graphic-novel

Ed vs. Yummy Fur examines this transition--how did the mini-comics differ from the comics, and how did the comics differ from graphic novel? This is an interesting case because we can see parts of the work that were redrawn, rewritten, excised, and changed. This sort of transformation is of great interest to critics, literary historians, art historians, philologists, etc. Evenson mentions Henry James' Roderick Hudson, a book James continually revised during his life, leading to four different published versions. Evenson describes the types and meanings of the changes Brown made between the comic book and the graphic novel. (However, he does not enumerate every single change--this book is critical, not encyclopedic.) 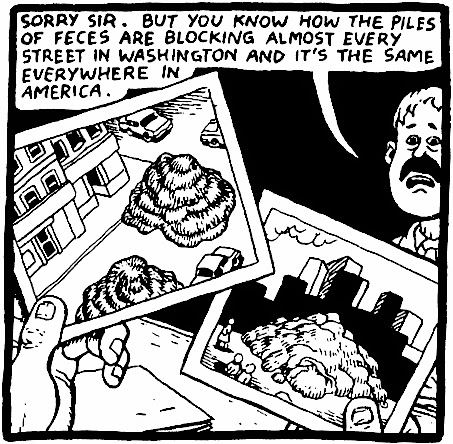 But the basic idea of his book would apply to many other contemporary comics--Love & Rockets and Maus both underwent changes from their initial forms to their final (or at least most recent) book collections. The changes that Yummy Fur underwent to become Ed the Happy Clown are fairly drastic but not unheard of, particularly for works conceived and drawn in that transitional period in which the comic book is declining while the graphic novel is ascendent.

The publisher of Ed vs. Yummy Fur is a very small press specializing in art comics (they published the two most recent Gabrielle Bell books, for example). This is the first of a series of short critical books about comics being published under the title Critical Cartoons. Scholarly writing on comics has been slowly increasing--the University Press of Mississippi has been a leader in this. I'm happy to see short critical books like Ed vs. Yummy Fur being published. I look forward to more from Uncivilized Books.
Robert Boyd at 3:24 PM
Share