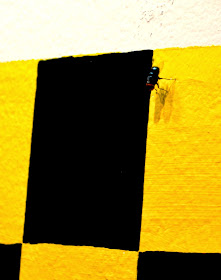 Fly at the Glasstire booth

My first impression was that it felt smaller. I don't have last year's program book, but I have 2012's. This year there were 55 exhibitors (of which four were non-profit spaces), and in 2012 there were 74 (with three non-profit spaces). Last year, when you walked in the door, there were massive artworks by Ann Wood, Sharon Engelstein and the Clayton Brothers greeting you before you even saw a single booth. This time, there were some cars. And 18 of the exhibitors this year were from Houston. In other words, after what felt like three years of growth, this year's fair felt like a retrenchment.

So what is it? The economy? That can't be it--we hear in national media over and over about how well Houston is doing. This time, everything felt scaled down and constrained. Glasstire, which has in the past had elaborate booths with live animals this year had a pedicab. Fun, but not so exciting in terms of sheer spectacle.

Bill Davenport gives me a pedicab ride through the fair

The thing was, on opening night as I surveyed the well-dressed crowd of VIP party attendees, I had an epiphany: Houston shouldn't have an art fair. I'm not going to try to make an economic argument here. If galleries--particularly local galleries--make some profit while there here and in doing so put some money into artists' hands, then I'm wrong and I'll happily cop to it. It just seems like if you are a Houstonian and you want to collect art by local artists, you don't need this fair. And if you want to collect work by artists from other places around the world, get on a plane to Art Basel or Frieze. I realize that not much of the work here was blue chip art, and therefore was relatively affordable, but the same can be said of the art shown at any number of satellite art fairs around Art Basel and Frieze. And to me, that makes TCAF seem surplus to requirements.

The fair would have been a tedious experience if I hadn't had a house guest in town. It is best to have a Virgil along with you when you enter the infernal pit. Artist Matthew Couper was showing his work Zoya Tommy Gallery, so I offered to put him up for the weekend. 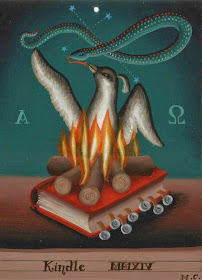 His work is a pastiche of Spanish colonial retablos, symbol-laden tableaux painted on very flat pieces of metal. The images are often dark and a bit shadowy. The horizon is low and the space is usually indistinct or bounded with distant mountains. There is always a night sky. The deliberately primitive realism heightens the sense of utter strangeness, the feeling that these things are vessels of arcane knowledge. Of course, Manuel Ocampo has mined similar terrain. One might think also of Michael Tracy, but Tracy's art is much more ecstatic and performance oriented. 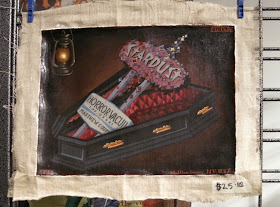 Couper comes from New Zealand but has been living in Las Vegas for the past four years. As screwed up as the Houston art scene sometimes seems, Couper's description of the Las Vegas scene makes Houston sound like paradise. But despite this, Vegas fascinates him, you can see from the piece above (which was not shown at TCAF, alas). His paintings are intriguing and beautiful--if you missed them at TCAF, check them out at Zoya Tommy Gallery.

I mentioned to him how previous TCAFs had seemed larger and more spectacular. I showed him photos of last year's entryway flanked by the two looming Sharon Engelstein blow-ups.  He laid the blame on the art fair promoters. Where was the media? Where was the advertising? Where was the hype? Where was the spectacle? 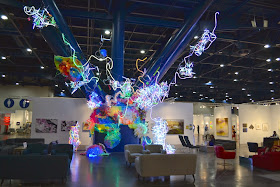 The one on-site installation that really impressed me Andela Andea's Lux Aeterna. It was a sprawling, garish piece, hanging off one of the weird radiating posts that dot the convention hall. But to be honest, I liked Alex Tremino's two glowing poles at Diana Lowenstain Gallery better. In the genre of "glowy art", Tremino does more with less.

In a different hall in the same convention center that weekend was the Big Texas Train Show. How did I find out about them? Simple--they had a billboard up on I-45. Did TCAF have a billboard? Maybe, but if so I never saw it. The only mainstream media coverage of TCAF I saw was this nice article in the Houston Chronicle about Nathaniel Donnett's "Gap store" at the Darke Gallery booth. But maybe I just missed all the camera crews from the local TV stations. 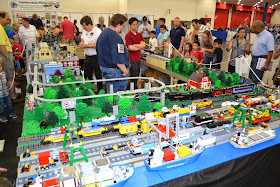 The Big Texas Train Show had installations which easily competed with those at TCAF in size. They were pretty spectacular--there were many tables installed covered with elaborate dioramas, little landscapes and cities, in every scale from Z (1:220 scale) to HO (1:87 scale) to G (1:32 scale). I had never even heard of G-scale trains. They're freaking huge. 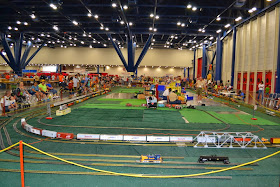 The oval track they set up for the G-scale trains was bigger than my apartment! 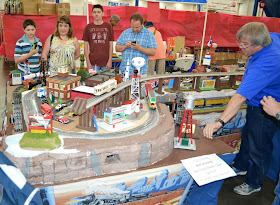 When I saw this beautiful diorama with its elevated streetcar, I thought--how cool it would be to build an HO scale model of the High Line in New York.

You can think of model railroads as a kind of industrial age folk art. So if you think of model railroads (and especially the attendant dioramas) as art--and I certainly do--who had the more successful art fair this weekend? What could TCAF have learned from the Big Texas Train Show? That buying billboards is a good idea? (It may be that TCAF had more advertising and publicity than I'm giving them credit for--but I didn't see any, and I was on the lookout for it.)

By the end of Saturday (I didn't attend Sunday), the thing that left the strongest negative impression were the flies. They were everywhere, especially around the bar in the VIP lounge. I can't think of a better metaphor for something being dead than a bunch of flies buzzing around. I hope they weren't an omen.

But in the end, the main reason to go to an art fair is to look at a bunch of art. Sure an art fair is not the best way to see art, but it is often the only way to see a lot of contemporary art all at once. That's what I like the most about them. TCAF was conservative this year. There wasn't much video, for example, nor installation or new media. It was mostly art that could be hung on a wall. Don't get me wrong--I love me some paintings and drawings and photos. I just would have hoped a fair explicitly devoted to contemporary art would have represented a broader range of contemporary art practice. But the exhibit strategy was undoubtedly practical--show what you can sell. In any case, here's some of the art I liked best. 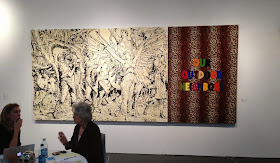 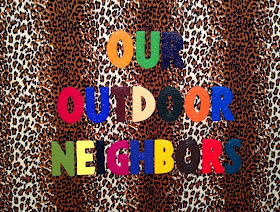 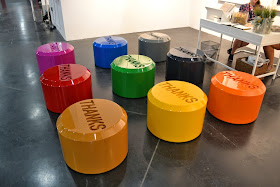 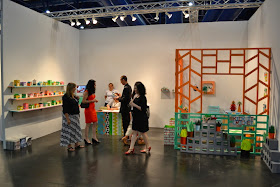 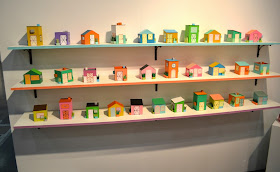 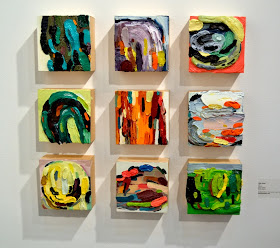 Billy Zinser, Lil', oil on panel, 5 x 5 inches each at the Public Trust 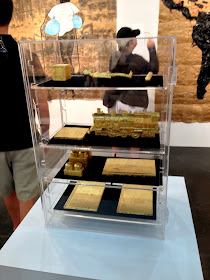 Nathaniel Donnett, How Much for These Dreams and Memories, vitrine, gold leaf on books and plastic objects, 2011 at Darke Gallery 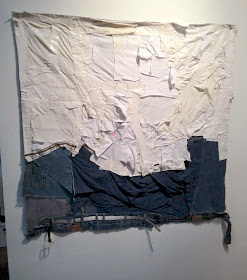 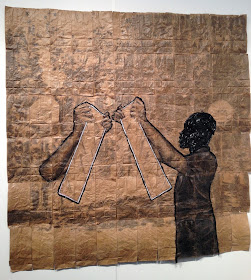 Darke Gallery was shuttered a while back when Linda Darke took time off to recover from a serious illness. It was back at the art fair with a wonderful solo show by Nathaniel Donnett. And Linda Darke was looking great. 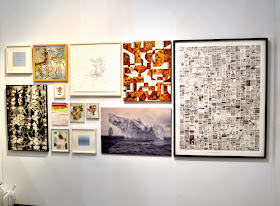 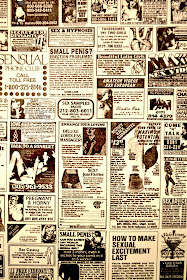 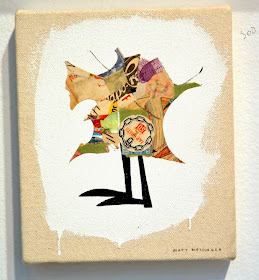 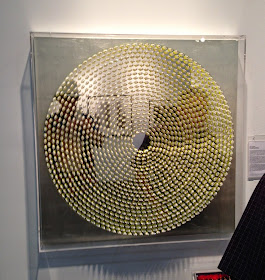 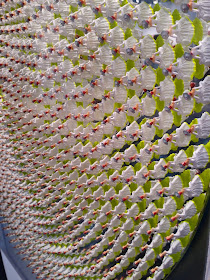 Claire Shegog apparently takes little figures used for cake decorations and heavily paints them to give them a little more solidity, then arranges them as you can see here. Now part of me laughs when I see something like that because it seems to fulfill Hennessy Youngman's definition of art as explained in this video. But there is something about it that appeals to me visually. 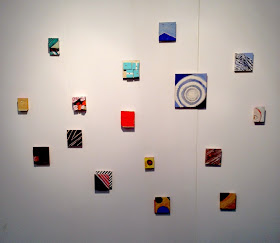 Cordy Ryman's artwork was at DCKT Contemporary at the fair in 2011, and now it's at Morgan Lehman. Lower east Side to Chelsea--I guess that's a move up. In any case, I liked this suite of tiny paintings. The sales director there suggested that Ryman's use of various materials in his work was a sign of his excellence as an artist, because only a really good artist could use so many media so well. But he is not a master of any media. His paintings always look awkward and king of unfinished. I can't tell if it's because of this or despite it that his work is appealing. Sometimes crudeness works--look at Forrest Bess. 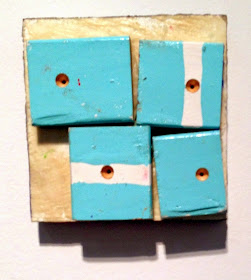 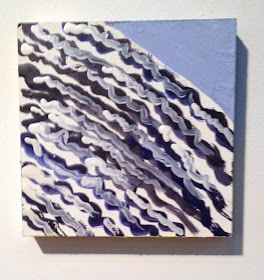 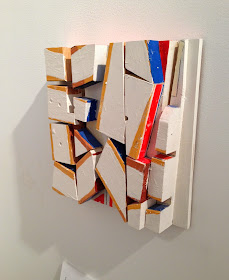 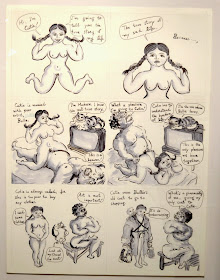 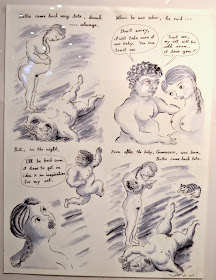 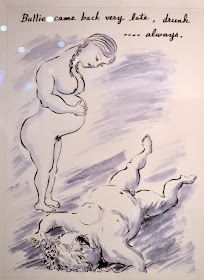 This was wonderful. While Zoya Tommy Gallery had some Ushio Shinohara boxing paintings at her booth, Kirk Hopper Fine Art had his wife, Noriko Shinohara, at his. I remember seeing these pages in the documentary about the couple, Cutie and the Boxer. The funny thing was that the labels on the wall said everything about the materials used and the date, but didn't mention that these were comics pages that were meant to be read in a particular order. In other words, there is no page number. I wonder if Noriko Shinohara considers them part of a whole? Are these, in fact, two pages from a unified graphic novel? If so, I wish someone would publish it. 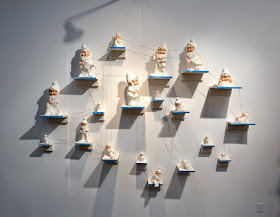 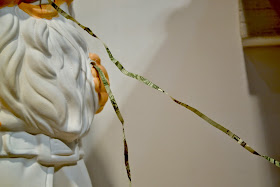