The Pan Review of Books: 33 Artists in 3 Acts 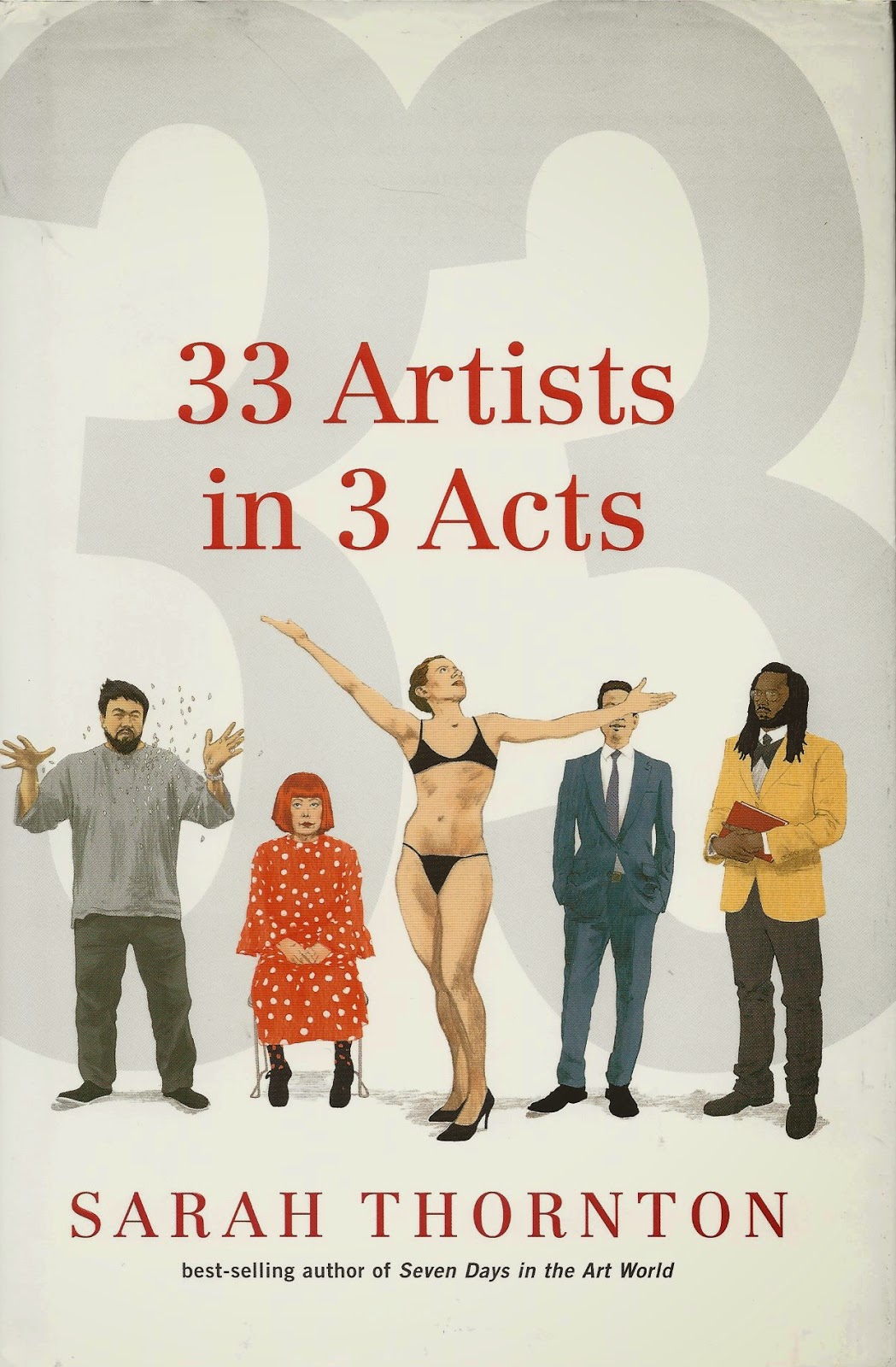 was published in 2008. It was a success for two reasons, I think. One, it treated the art world as its subject rather than particular artists or exhibits. Of course she wasn't the first to do this. Art Worlds

(1982) by Howard Becker looked at the art world in a broader sense than Thornton did, and in pain-staking detail. Gary Alan Fine examined the world of outsider art in Everyday Genius: Self-Taught Art and the Culture of Authenticity

(2004). All three writers are sociologists, which makes their interest in art more than just an interest in aesthetics--they want to know about the range of activities and people involved in this space.

But Thornton wasn't writing an academic text. What she also brought to it was a sharp-witted, first-person journalistic writing style. She is a good writer. I admit that's a highly subjective judgment, but what I mean is that I would probably find her writing entertaining even if she were writing about something I have no particular interest in. How many art writers can you say that about?

After writing Seven Days in the Art World, Thornton became the art correspondent for The Economist. This gave her a platform to write about the art world without having to become an art critic. This being The Economist, a lot of her writing was about the art market. Not having any particular need to suck up to that world, her articles could be quite cutting and revealing. (I think writers like Thornton and Felix Salmon who write about the art market occasionally for general interest publications are for more interesting than professional art market observers like Marion Maneker because they are disinterested--and better writers.)

But writing about the art purchases of ultra-rich can leave one feeling pretty dirty, and Thornton swore it off in a grand and glorious way in her article, "Top 10 reasons NOT towrite about the art market." This was published in 2012 in Francesco Bonami's Tar Magazine. Among her reasons not to write about the art market were that "Oligarchs and dictators are not cool" and "It implies that money is the most important thing about art." She also told readers that there were many scandalous stories she could tell about the art market that couldn't make it past the Economist's lawyers. However bad the art market seems based on her reporting, she implied, the reality is far worse.

That was a good way to end one stage in Thornton's multi-year exploration of the world of art, but the question was, what next? 33 Artists in 3 Acts

is the answer. When I heard the title, I was worried that Thornton had abandoned her sociological background and was going to write just about a collection of individuals. But she has placed them to various degrees in a world of friends, colleagues, helpers and family--in short, she is not doing Art 21-style profiles.

The book is divided into three sections: Politics, Kinship and Craft. The last is a bit cheeky--although many of the artists display high degrees of craft in their work (such as Isaac Julien, Grayson Perry and Christian Marclay), the craft she is most interested in is the crafting of an identity as an artist. This is why she wants to interview artists in their studios, because she sees them as places where the artist practices this identity.

Sometimes she is heavy-handed, as when she juxtaposes a chapter on Jeff Koons and a chapter on Ai Weiwei--both similar artists in some ways, but Koons is described as something of a phony in a sharp suit compared to the politically active Ai. The way Thornton splits up the chapters in interesting, too. There are several chapters each for Koons and Ai, reflecting different encounters Thornton had with each artist. This means we see time passing. This doesn't mean much for Koons--his life is on an even keel. But for Ai Weiwei, Thornton interviews both before and after his arrest and detention by the Chinese government. Thornton's admiration of him (and her disdain of Koons) is evident. She writes, "Many Western artists squander their freedom of speech through convoluted forms of self-censorship. It is hard to resist Ai's elation that he is not one of them."

Act II, Kinship, contains two large interlocking sections about Maurizio Cattelan and his friends, curators Francesco Bonami (who published Thornton's essay about quitting the art market beat) and Massimiliano Gioni, and about the family of Laurie Simmons and Carroll Dunham (and their two daughters Grace Dunham and Lena Dunham). Her interviews with the Dunhams are especially interesting because they start when Lena Dunham is filming Tiny Furniture (which stars herself and Laurie Simmons as her mother, but which Carroll Dunham chose not to be in). This film would establish Lena Dunham's reputation and would lead to her being given a TV show in HBO, Girls, which would shoot her into stardom. Some critics have suggested that Lena Dunham's success is due to some kind of nepotism, which is absurd. No one watches a TV show because of who the star's parents were, and more important, who outside of the art world has ever heard of Carroll Dunham and Laurie Simmons? Still, the chapters on the various family members do show how much Lena Dunham's upbringing and family background shaped her career path. Not least, it showed her an artistic path she didn't want to take--the elite world of contemporary art where only a privileged few will ever see your art.

One chapter deals with two artists, Jennifer Dalton and William Powhida. I think Thornton included them perhaps to counteract the way the rest of the book deals with so many of the glitterati of the art world--Dalton and Powhida's work together has been specifically critical of the art world. Much of the book deals with artists who operate at the higher levels of the art world which is where the money is. So when she writes about Cattelan, she has him on the phone with mega-collector Dakis Joannou, while writing about Powhida, she refers to his famous critique of the vanity show of work from Jannou's collection at the New Museum.

But the artist Thornton seems to admire the most is Andrea Fraser. The performance and video artist is profiled over several chapters in Act III, which deals with "craft." Fraser is depicted as being simultaneously canny and reckless in crafting her own identity as an artist. The first chapter on Fraser is description of a performance. Fraser is provocative and takes on many personas in the course of the performance, which makes her see a little hard to get a handle on. Her work is based on psychology and psychotherapy, and she looks at other artists' public performance as artists through that lens. But Thornton also mentions how Fraser is a high school drop-out with no university degrees who prior to being hired as an art professor at UCLA lived precariously on little income and carried debt. Part of the work of being an artist may be crafting one's identity as an artist, but being an artist also means living in the real world.

Fraser's most infamous work deals with this--Untitled (2003) is a video of Fraser having sex with an art collector who has paid $20,000 for the experience. The collector also got one copy of the video, which was produced in an edition of five. It feels like a piece of stunt art in some ways, but it's blunt analogy: being an artist in the high end art world is not unlike prostitution. Along these lines,  Fraser also wrote an essay for the 2012 Whitney Biennial called "L'1%, C'est moi," a brutal condemnation of the art market and the extreme inequality that has feeds it. It's worth quoting:


Rather than turning to collectors to subsidize the acquisition of art works at grotesquely inflated prices, European museums should turn away from the art market and the art and artists valorized in it. If this means that public museums contract and collectors create their own privately controlled institutions, so be it. Let these private institutions be the treasure vaults and theme-park spectacles and economic freak shows that many already are. Let curators and critics and art historians as well as artists withdraw their cultural capital from this market.

I think Fraser's willingness to issue such a full-throated denunciation is part of what Thornton admires. Thornton issued her very public "I quit!," but she still is interested in the world of blue chip art, and that world includes collectors and the market. There is an ambivalence in 33 Artists in 3 Acts. Thornton is not quite willing to go as far as Powhida, Dalton and Fraser in her rejection of the ethical and moral pit of the high-end art market, but she gives them ample space to say how they feel. Meanwhile, she writes about many of today's bluest of the blue chip artists like Koons and Damien Hirst and others, sometimes with disapproval but not always.

I'm not condemning her for her ambivalence, because as ethically screwed up as the big-money art world is, it is fascinating! That's a good deal of the pleasure in reading this book. Thornton is an interested interlocutor, who wants to like the artists and their activities but who approaches most of them with at least a little skepticism. I would say that in this book, the sociologist part of Thornton recedes somewhat in favor of the journalist part, but the sociologist is still there. I've said it before--we need more people with backgrounds in the social sciences writing about art, and if they can write as compellingly as Sarah Thornton, all the better.
Robert Boyd at 8:30 PM
Share