Domesticity with Chuck and George

MANUAL. Elmgreen and Dragset. Allora & Calzadilla. McDermott & McGough. Pruitt-Early. Gilbert and George. And Chuck and George. The latter is the collective name of team of Brian K. Jones and Brian K. Scott, two artists who met in art school in the early 90s and have been an artistic team and a couple ever since (or they were still a couple as of January 2013, when the Dallas Observer named them official "Masterminds'). They named their collective selves in honor of the most famous two-man team in art, Gilbert and George. One interesting thing about artistic partners is that they may or may not also be couples. The Art Guys are a team but not a couple. Hillerbrand+Magsamen are a team and a couple. Some artistic couples are not teams, like Laurie Simpson and Carroll Dunham or Robert Gober and Donald Moffet. Some artistic couples break up and cease to be teams, like Pruitt-Early. Some couples who are teams break up as couples but continue their artistic partnership, like Elmgreen and Dragset. And some make the domesticity implicit in coupledom a subject of their work, as with Hillerbrand+Magsamen.

If you go to Chuck and George's website, there is a section called "La Casa de la Chuck and George," which features 50 photos of their actual Oak Cliff (Dallas) home, a house crammed with their own artwork and other things they have collected. It's clean but cluttered, a funky home that would be laughed at by an interior decorator but that the right person (me, for example) would find cozy and inviting. It's beautiful. It is, quite honestly, the kind of ambiance I personally aspire to create in my own modestly funky home. 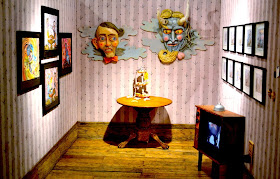 They have recreated something of a mini-version of their home inside Box 13 with Table Scrappin'. Rather than just hanging their artwork up on the walls of Box 13, which would have been a perfectly acceptable installation strategy, they built a room within a room--three wall-papered walls with art hanging on them, a simulated hardwood floor, a table and a TV. Home sweet home. 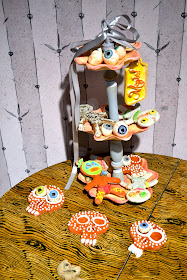 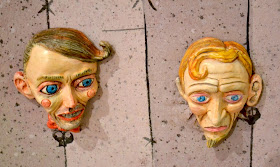 Two tiny self-portraits are on the right hand wall, next to an inviting peephole. You look in, hoping maybe to see something naughty, and instead you see a tiny version of the same room you are in. A room within a room within a room. 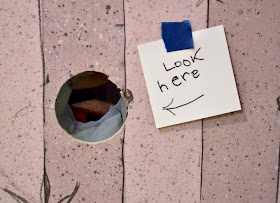 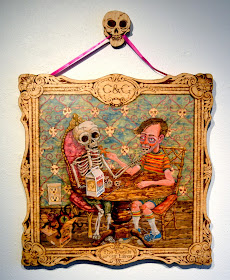 Of course, they aren't exactly realistic self-portraits. They depict themselves in varied ways--as angels, demons, skeletons, monkees and occasionally as people. They are fundamentally cartoonists when they draw themselves. Colored line-drawings are their main means of expression. 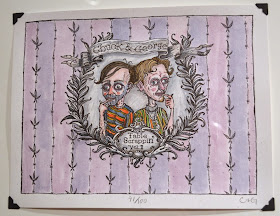 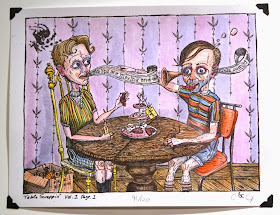 They are skilled printmakers. When I met Brian K. Scott (aka "George"), he showed me some amazingly detailed (and slightly filthy) linoleum blocks he was carving to make prints out of. Table Scrappin' vol. 1 is a series of hand-colored letterpress prints featuring the pair sitting at a table, continually transforming. 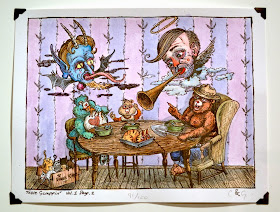 The sequence of images will make one think of a comic strip, and the single point of view and old-fashioned printing may more specifically make you think of comic strips from the 19th century. That's fine as far as it goes, but what I think is happening here is a little different. It feels like a dialogue between the two artists. Are they taking turns drawing each page or drawing each figure? I wouldn't be surprised if something like that was going on. 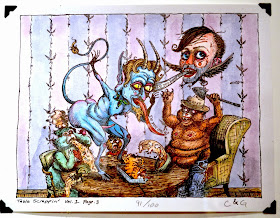 Of course, if that is the case, they disguise it well--the style is remarkably consistent from one page to the next. The style of the linework is so consistent that I would suggest that one artist is finishing all the pages. But maybe I'm underestimating the pair's ability to subsume their individual styles into one composite style. 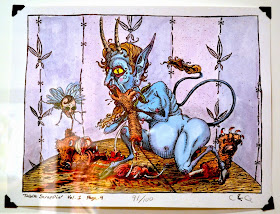 After all, as their webpage makes clear, Scott and Jones are each stellar draftsmen.  And the collective work of Chuck and George really does come across as a combination of the two artists' individual styles. 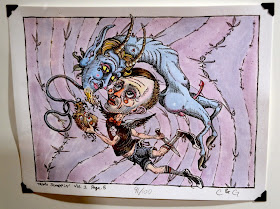 The work is violent and sexual, but also has the feeling of very old children's books. In this regard, their work reminds me strongly of cartoonist Tony Millionaire, another artist whose acid-etched pen-and-ink style recalls 19th century illustrators like John Tenniel and A.B. Frost. Millionaire's delightfully perverse comic strip Maakies is similar in tone to Table Scrappin' vol. 1 (and also features monkees!), but interestingly, Millionaire has taken his "perverse children's book" style and drawn actual children's books. Maybe that would be a next step for Chuck and George. I suspect they'd be great at it. 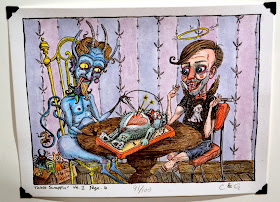 Another irony in Table Scrappin' vol. 1, and in the entire show, is that no matter how sexual, violent or just plain bizarre the work gets, there is always a sense of the domestic. I said the work seemed like a dialogue, but perhaps I should have said it's like a game--the kind of game played on the parlor table--a board game or cards or dominoes. 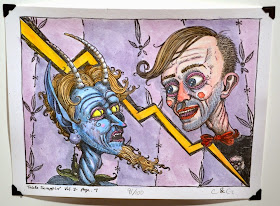 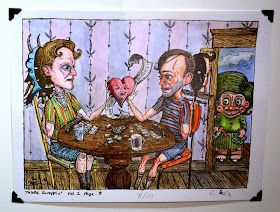 And just when you think the game is over, and Chuck and George have returned to being Brian and Brian, masks put aside and dominoes laid out... 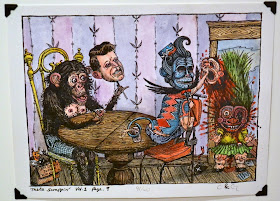 ...It starts all over again! Table Scrappin' is a game with no end. It's not a diversion--it's a way of life for couples. I suspect there will be some very competitive dominoes games between Chuck and George for decades to come. At least, I hope so.

Table Scrappin' runs through December 13 at Box 13.
Robert Boyd at 8:46 AM
Share