To Think That I Saw It on Cherryhurst Street

When I got an invitation to see an exhibit at Cherryhurst House, I had never heard of it. I assumed it was a new gallery or exhibition space, but the invite was vague. And that bugged me because I didn't want to get sucked into someone's lame amateur hour pop-up gallery or whatever. That's the problem with going to something you've never heard of before. In my experience, there is about a 50% chance that it will be totally boring, a 40% chance that it will be embarrassingly horrible in some way. and a 10% chance of being interesting. Of course, I treasure those 10% experiences, but every time I respond to one of these out-of-the-blue invites, I worry about the other 90%. But my worries were unfounded--the exhibit of Cherryhurst House's two resident artists, Daniela Edburg and Barbara Levine was excellent. 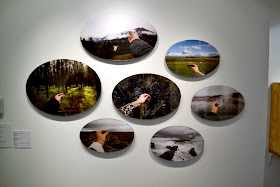 The house is really two houses, connected by a porch. One house is used for exhibition space and is connected to Dallas McNamara's living space. The other house is the live-work space for resident artists. McNamara is the owner of Cherryhurst House. McNamara is a photographer who bought the houses in 2008, saving it from McMansionization. The extensive renovations are tasteful and respect the original 1913 dwelling (it's no "humper house"!). The idea is that resident artists can collaborate, and that the exhibition space would be a constantly shifting record of this collaboration and furthermore, the location of a "salon."

, where he quotes Miwon Kwon's essay "Exchange Rate: On Obligation and Reciprocity in Some Art of the 1960s and After":  "[T]he presumption that dematerialization = anticommodity still persists in structuring the contemporary art discourse," despite the fact that "services, information and 'experience' are now quantifiable units of measure to gauge economic productivity, growth and profit. Ideas and actions do not debilitate or escape the market system because they are dematerialized; they drive it because so." So we could say that Dallas McNamara is just another collector, collecting the experience of having artists reside in her home and the dialogic or relational artwork that a salon can be said to resemble. Not that there's anything wrong with this. I'm a collector, too, but not one adventurous enough, for example, to "collect" a performance. So if McNamara is a "collector," she is a pretty audacious one. 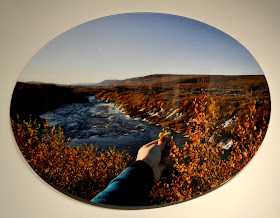 Daniela Edburg is a Mexican artist (born in Houston), but much of her art in this exhibit has origins in trips taken to nature reserves in Canada and Iceland. She writes, "In the natural reserves of Canada and Iceland it is forbidden to take anything, including leaves, rocks, moss, branches or even deer droppings. This prohibition led me to make my own samples and, in this way, possess precious and forbidden objects." My "make," she mean to crochet her samples out of various natural fibers. So in Moss collected from Þingvallavegur, Iceland, the bit of moss she is holding against the landscape has, in fact, been crocheted by Edburg. And not only that, it was crocheted on the spot, while she was there in that landscape. I asked her if that meant she was always hiking around carrying crochet gear and yarn, and she told me yes. 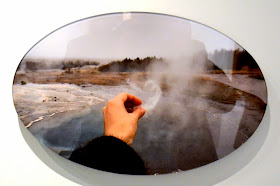 And some of the things she "collects" couldn't really be collected even if she wanted to--like steam or a cloud. But by making simulacra out of yarn, she gets to exit the parks not only with "forbidden" objects, but impossible objects. 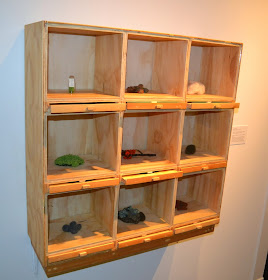 And like any good collector, she has a lovely display case for her finds. You can see the object and a photo of the location in each cubbyhole. 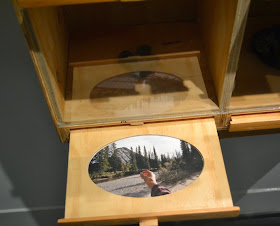 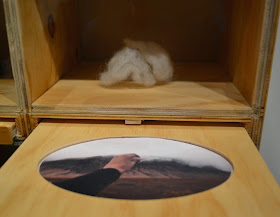 But having gone to these places and crocheted these objects was just the start for Edburg. She plays with scale, making a giant "sample" of deer droppings. It looked like a comfortable object to plop down onto and relax, but I observed no one trying it out in that fashion. 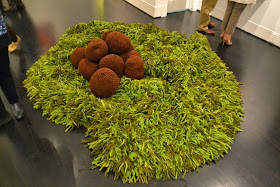 In the same gallery, there was a series of photos Edburg calls Civilized Portraits. Each feature a photograph of a chimera with an animal head and human body. I couldn't tell if people were wearing animal head masks or if the two parts were joined in Photoshop. They had the dignity one would want in a formal portrait. Each figure is dressed modestly and placed against a dark background. And next to each portrait is a box of (crocheted) shit. 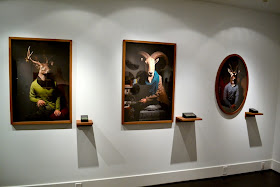 I guess there are a lot of possible interpretations of this--the obvious one is that it reminds us that we are animals and that our shit is as much a part of us as our civilization is. But the presentation, complete with the elegant and beautiful handmade crocheted turds, is completely civilized. That is a vibe one gets from all of Edburg's work in this show--not nature, not wilderness, but civilization. More particularly, a sense of bourgeois comfort. 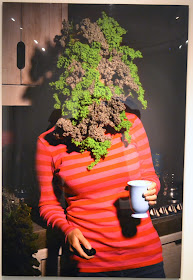 Even her self-portrait, Civilized Moss, radiates this feeling. It is not formal like the other Civilized portraits, but its setting in the kitchen, and the cup in the subject's hand, speak to bourgeois domesticity. 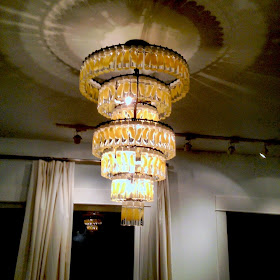 Edburg pushes it with The Comfort Zone. This piece is a chandelier made of specimen bottles, each one containing an off-white larva of a tineola bisselliella or a common clothes moth. Of course, they aren't actual larvae--each one is a crocheted object, suspended in clear oil. But still, it's quite creepy, like something you'd see in a horror movie. 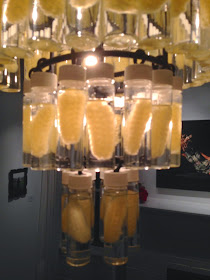 So on one hand, it might push you a little bit out of your comfort zone because of the creepiness factor. But on the other hand, a big beautiful chandelier is emblematic of haute bourgeois comfort. It entertainingly plays with both extremes. And what a striking, beautiful object! My bourgeois self covets it. 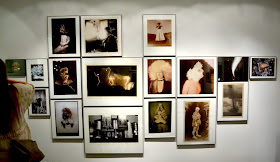 Barbara Levine's work involves found photography.She is half of Project B with Paige Ramey, which makes prints of anonymous vintage photographs available to collectors. Part of what she showed at Cherryhurst House was curatorial; photos selected and arranged by Levine that she did not take. For instance, the grouping Out of the World, 17 photos bunched tightly together on one wall of the gallery. Many of the photos were of sideshow performers, which is one of the subjects that Project B specializes in. 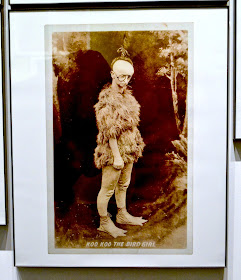 Some readers might recognize Elizabeth Green ("Koo Koo the Bird Girl") from the movie Freaks. Out of this world is a dramatic collection of photos. When I saw this, I was reminded of a passage from John Berger's Ways of Seeing


Adults and children sometimes have boards in their bedrooms or living-rooms on which they pin pieces of paper: letters, snapshots, reproduction or paintings, newspaper cuttings, original drawings, postcards. On each board all the images belong to the same language and all are more or less equal within it, because they have been chosen in a highly personal way to match and express the room's inhabitant.

So if you were highly interested in sideshow freaks (and I have known several people with such interests), you might put up a bunch of photos of them, along with any other photos or images you like. But what I can't imagine you doing is hiring Barbara Levine to come up with the grouping for you. I don't say this because I think she did a bad job--I like Out of this world, partly because I am fascinated by the world of sideshow performers, but also because these deployed these disparate images in a clever way. But if I wanted to decorate my house with images of sideshow performers, it would be out of a passion for the subject. It would necessarily be, as John Berger writes, highly personal. It would never be something that I would outsource to someone else. 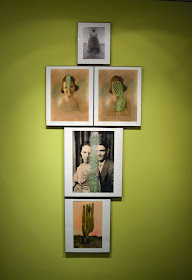 But in Cactus between us, Levine does something different. Instead of curating a group of images, she mixes and matches images inside the rectangle of the photographs. Vintage images of a woman and of a couple are collaged with cactuses. (The top and bottom images seem unaltered from their original source, but I can't be certain of that.) So perhaps these are prickly people, given to pointed remarks. It doesn't bode well for the implied romance. I liked the fact that the arrangement of the photos both mimicked the form of a human figure and a tall saguaro cactus. 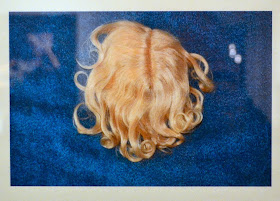 Not all of Levine's work involves multiple images and archival sources. As far as I can tell, Blonde on Blue is a photograph taken by Levine. It doesn't seem to be part of Project B. It was displayed in the same room as The Comfort Zone, which struck me as appropriate. Both pieces combine discomfort and beauty. For me, there is something disquieting about this image. It seems to suggest violence or deception. But the colors are beautiful. Of course, a combination of discomfort or disquiet with beauty is a characteristic of surrealist artists. This kind of juxtaposition certainly reminds me of Man Ray. While Cactus between us is witty but comprehensible, Blonde on Blue is more mysterious. Its meaning never settles with me, and for that reason, I like it more.

The show was a good pairing of artists. It spoke both to positive bourgeois values (tastefully displayed beautiful objects in a lovely house) with disquieting aspects--shit, sideshow freaks, chimeras, etc. It was a good introduction to Cherryhurst House.