Back in the early 80s, with his dark hair, his demonic beard and his drooping eyelid, Basilios Poulos looked a little bit villainous. Imagine Dostoevsky with even darker eyes. It was an intimidating look for an art professor. But his good nature more than made up for it, as did his love of art. I well remember him showing us an image of himself sitting in front of Jackson Pollock's The Deep. He said told us that many people didn't like the late paintings by Pollock, but that this was a great work. 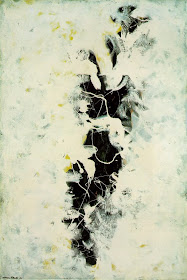 Today, his hair grey, his beard trimmed and an easy smile on his face, he looks the opposite of villainous. And he turned his back on abstraction--it seemed to him to have become too easy, too bourgeois. He loves Jerry Saltz's idea of zombie abstraction, referring to paintings that may be accomplished and even interesting in some ways, but which mainly exist as valuable decorative items. That said, if you look at his current paintings without knowing anything about them, you'll likely perceive them as a group of colorful abstractions.

But for him, they are landscapes--two very specific groups of landscapes. One are based on bridges on the Peloponnese in Greece. These bridges all were within driving distance of the village where Poulos spends time. The other series are winter landscapes from South Carolina, where Poulos is from and where he still has family. 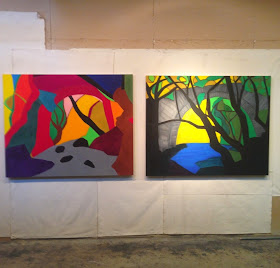 The earliest bridge painting (on the right above) was more-or-less naturalistic--grey stone bridge, dark trees, blue water, morning light. But as one can see with the painting on the left, Poulos abandons the use of local color for an intense palette. Trees, bridges, rocks, ground and sky become almost abstract shapes. His touchstone here is Andre Derain's The Turning Road, a masterpiece owned by the MFAH. 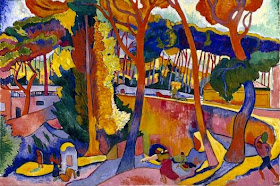 In my experience, artists of Poulos's generation revere modernism. His studio was stacked with books of the artists he loves--Picasso, Braque. Matisse, Derain and the other Fauves, Marsden Hartley, Francis Bacon, etc. Painting is for many artists younger than Poulos a contentious medium. Thomas McEvilley said that when painting seemed to come roaring back in the 80s after a decade in "exile," that it wasn't triumphant but "chastened." But with painters like Poulos, painting is never went away and never was about process, nor was it conceptual, nor "meta," nor ironic. Painting exists for the purpose of producing paintings--satisfying paintings that are expressive, paintings that are the result of specific materials and the specific training and the specific practice of the artist. 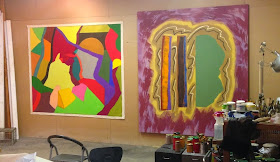 The painting on the left above is another bridge painting (you can see the bridge in the upper right), but the one next to it is one that some readers may remember from the 1980s. It's Ornomenos (1984) and it was shown in the famous painting show at MFAH, Fresh Paint. Poulos has two shows in Houston coming up in 2015. One, at HBU's Contemporary Art Gallery, will show his recent landscapes. The other, at his longtime gallery Meredith Long & Company, will show earlier work from the 80s. I've always liked this 80s work, but it really looks 80s. If Poulos attempted these abstractions now, they'd feel like zombie abstractions. When you realize this, you understand why his work has evolved the way it did. 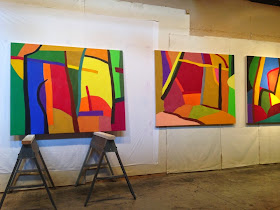 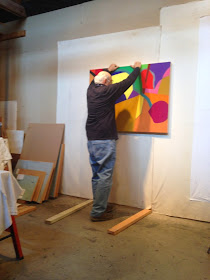 But the value of visiting a studio is not just in seeing an artist's latest work. The proverbial white cube may not be an "ideologically neutral" space, as "Hennessy Youngman" ironically called it, but it's a pleasant enough place to see some art. But a studio is different. It's personal. Artists, especially painters, collect images and objects and put them on the wall. Parts of Poulos's gallery are open and airy. Others look like this: 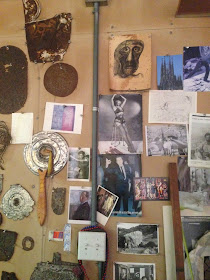 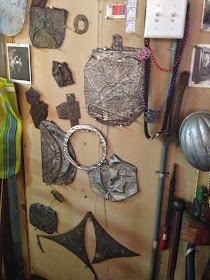 Flattened metal objects picked up alongside the road before they all got replaced with plastic. 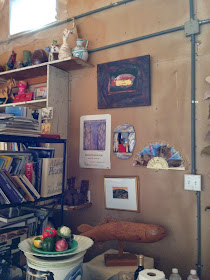 Some of Poulos's own ceramic art, plus a folk-art carved fish. 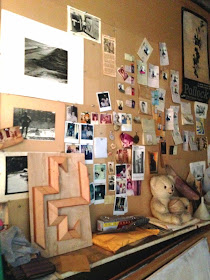 Old photos and visas and passports 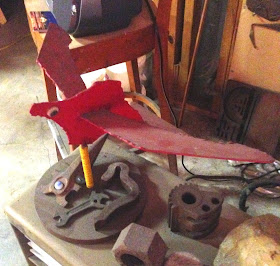 A bird made by the late, great Jeff McKissack.

And when you use Bas Poulos's restroom, you see three (four?) sexy Graces. 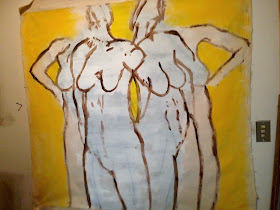 To me, a trip to an artist's studio destroys the notion of the autonomous work of art. Someday, those Bridge paintings and those South Carolina paintings will leave the studio and enter people's collections. When that happens, their link to the studio is frayed. But for me, I can't see them without seeing Fancis Bacon pointing, Bettie Page in lingerie, a dusty Jeff McKissack, etc. Poulos is a traditional painter--he is not a bricoleur or a relational artist or an installation artist. But as with many artists whose studios I've visited, I will carry a memory of the profoundly individual, casually curated clutter of the space, and I won't be able to see his paintings without thinking about it.