HOU do HOU: Will the City Ever Recognize its Own Culture?

Over a 48-hour period, Houston has let two cultural "icons" be destroyed. One, the Funnel Tunnel by Patrick Renner, was new and had regional attention. To be honest, it was a potential icon that showed real promise. The other, The Flower Man's House by Cleveland Turner, was almost two decades in the making and had achieved international acclaim. It was a bona fide icon. Both were hugely popular within the communities in which they resided.

What puzzles me is why the city of Houston (or the Houston Arts Alliance [HAA], manager of the city's civic art collection) which is in constant search of a cultural identity, didn't seize the opportunity to own this locally produced art and attempt to preserve it?

Institutions pay exorbitant amounts of money to event organizers to generate exactly the type of community involvement and identity that these artworks generated naturally. The City of Houston regularly forks over millions to rebrand itself, a.k.a. give the city a cultural identity. For instance, in 1997, Bob Lanier spent $1M in tax payer money and another $2.5M in private funds to produce "Houston: Expect the Unexpected." That is only one of many branding rat holes down which city leaders have poured tax payer money. HAA had a similarly disastrous foray into sloganeering with it's "Houston is Inspired" mural by committee. Local blogger Harbeer Sandhu at texphrastic painfully detailed it.

Funnel Tunnel and Flower Man's House grew out of the urban ecosystem that is Houston. They were created by local artists, are unique, have garnered national and international publicity, and had popular support in their neighborhoods.

What more could a city struggling to establish its identify ask for? 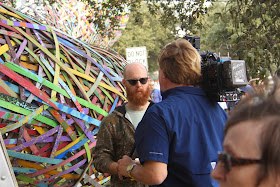 There are, of course, official reasons why both exhibits were torn down.

The primary one given for the Funnel Tunnel was that it was established as a temporary exhibition. Temporary alludes to the fact that the Art League doesn't have the infrastructure (read money because that's what were talking about) to maintain the structure long term. Nonetheless, the artwork itself was partially constructed by volunteers, maintained by volunteers, and disassembled by volunteers. Plus, it's steel infrastructure looks anything but temporary. It seems (from the outside) that a small amount of money from the city, some weather proofing of the substructure, and the efforts of volunteers could easily sustain it in perpetuity. 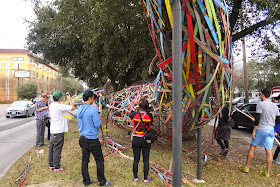 If you can't preserve it, cannibalize it. Volunteers helping to disassemble and collecting souvenirs.

Imagine if you will an annual or bi-annual neighborhood festival centered around a local art work that is popular with its adjacent residents and Houstonians everywhere. The city/HAA could close down the northbound lanes on Montrose and make the southbound lanes two-way, thus limiting traffic for a few hours but not blocking it. (I'm not a heretic.) The Art League Houston could donate it's parking lot and facilities to the cause. Vendors could turn the ALH parking lot into a mini-festival while volunteers maintain the sculpture. 4 hours. $20K. Cultural icon established. 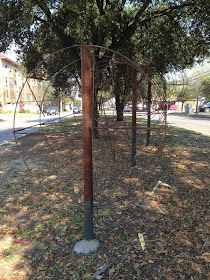 Only the skeleton remained

The Flower Man's house was a little more complicated. By complicated, I mean it would have cost more money to restore/preserve than the Funnel Tunnel and it's in a historically African-American neighborhood. History and empirical evidence reveal that money tends not to flow these neighborhoods. 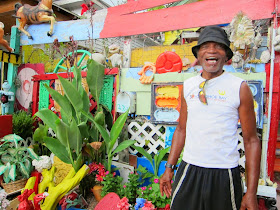 Cleveland Turner, a.k.a. The Flower Man. Photo by Pete Gershon, author of Painting the Town Orange: The Stories Behind Houston's Visionary Art Environments

The verdict on the house was that it was a public safety hazard. Turner died in December 2013 and so the house had been left unattended for over a year and became infested with mold. 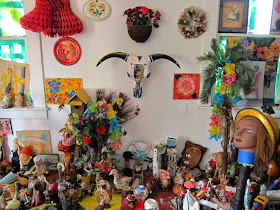 Inside the Flower Man's house. Photo by Pete Gershon

Mold is a harsh reality in Houston. If you're poor, mold remediation is virtually impossible. If you have $1M that's been redirected from a poorly conceived rebranding campaign, it's totally do-able. Worst case, the city/HAA acquires the property, demolishes the building, builds a replica of the house or a museum, and donates it along with the annual funds to properly maintain it to a non-profit already in the area like Project Row Houses. Then, it could function as a cultural destination like the Orange Show or the Beer Can House. 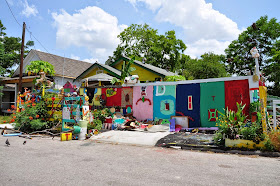 The Orange Show and the Beer Can house have private, non-governmental organizations that fund them. Actually, it's the same one. My response: who gives a shit. The fact that those white folk artists, their family, and their very wealthy friends\supporters had more disposable income than the Flower Man is irrelevant to his cultural significance. He's a folk artist with the same passion and intensity as Jeff McKissack and John Milkovisch. He deserves the same treatment and would very likely inspire a non-profit foundation to augment and possibly take over any initial support from the city.

Imagine the same volunteer festival that I fantasized about for the Funnel Tunnel. However, in the case of the Flower Man's house, it isn't a fantasy. Over the years, Project Row House organized several volunteer efforts to help paint and repair the house.

Plus, Cleveland Turner's personnel story from homeless drug addict to community advocate is the perfect redemptive story...except he's not white or overtly religious. His religion was his joy, which manifest itself in his art. What's not to love about that?

Nevertheless, nada from our cultural curators at city hall/HAA. 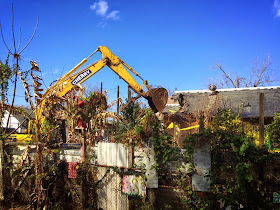 Demolition of the Flower Man's house. Photo by Francesco Conti

And so by night fall of February 8, 2015, both were no more. It's a shame because efforts to save those public art works would have supported the city's unique culture. The Funnel Tunnel and the Flower Man's house could have contributed to a Houston identity based on the efforts of Houstonians, which in my opinion, is a far better use of tax payer dollars than a lame rebranding campaign that leaves us all wondering "Who were the ad wizards that came up with that one"...and alas, culturally poorer.