Part of the fun of Lawndale’s Big Show is simply navigating through all the work. Like a flea market, it’s enticing to think that something with a resonating weirdness or striking complexity lingers right around the corner. But compared to previous years, this year’s group came off as much safer and sedate, like a Big Show on quaaludes. There was too little risk-taking, too much easy symbolism, too many heavy-handed one-liners. Some of that is to be expected of an open-call, juried exhibition of this magnitude, but the over all lack of personality had me pining for the Duncan MacKenzie/Avril Falgout papier mache rocker days. The slump can be attributed to any one of three things: 1) This is the best of what curator George Scheer had to choose from. 2) George Scheer has a yawn-worthy curatorial eye. Or 3) The new digital selection process is having damaging effects on the over all curation. Knowing that many of the same artists apply year after year and Scheer had nearly 1,000 works to choose from, I suspect #1 isn’t the case. Sure, it’s possible that Scheer is just a boring curator, but after all, Lawndale hand-picks each year’s judge; it’s not like they pull any unqualified person off the street—which makes me suspicious of #2. This is Lawndale’s first year to switch to digital, and I always thought having everyone haul in their work was silly and unnecessary, but there’s something to be said about having a tangible, first-hand view of how the work behaves in the space and in tandem with the other work. This year’s show heavily privileges 2D over 3D work—work that probably photographs better. And, of course with any digital selection process, there’s always the possibility of losing out on quality work from artists who are just bad documenters. It’s a little early to blame it on digital, but it will be interesting to see how the coming years will play out if they stick to it. 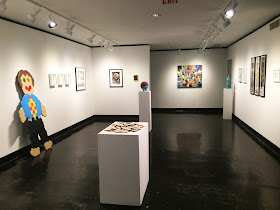 Regardless, there are always standouts, and here are my top ten: 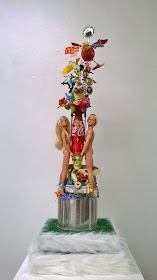 Money, Coca-cola, and McDonald’s seem to be the go-to icons for anyone critiquing corporate commodity culture, and here Hartman employs just about every predictable motif imaginable. But as hand-cuffed, naked Ken and Barbie blissfully stare off into the distance, bearing the weight of an errant yet well-structured cornucopia of crap, Hartman’s modestly scaled trophy monument conveys as much of a sense of fun and care as it does cynicism. It’s the light-hearted ambivalence Hartman conveys that makes the work compelling, that saves it from becoming the same capitalist agitprop we’ve seen a thousand times before. 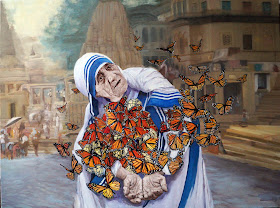 In Mary Carol Kenney’s Silent Like Nature, an elderly woman, perhaps a Mother Teresa figure, stands center, leaning with head cocked to the side, hands outstretched, releasing a kaleidoscope of Monarch butterflies. However, the sharp lines and vivid colors of the butterflies stand in sharp contrast to the soft, graying woman, especially in relation to the muted, Impressionistic background. It’s as though Kenney shone a spotlight directly on the butterflies; they seem Photoshopped into the picture. It is unclear if this discontinuity was intentional, but it’s precisely this disjuncture that makes the painting so interesting. The butterflies are as much intruders as they are the focal point: with the woman’s upward-glancing gaze away from the butterflies, it seems equally likely they are suffocating her as she is releasing them. 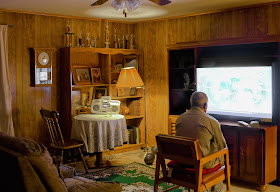 Huntsman directs our eye to a corner, a corner adored with wood paneling, a quaint bookcase filled with trophies and family pictures, a glowing lamp, and an outmoded stereo. What at first appears as a documentary photograph of an elderly man—perhaps her father or grandfather—quickly reads as a self-portrait. Panning as much of the room as she can from one corner to the other, we get the sense that Huntsman is grasping at the memories and familial comforts she sees across the room bathed in warm, yellow light. Yet she stands removed, facing the back of a man solitarily engaged in the rituals and comforts of old age. 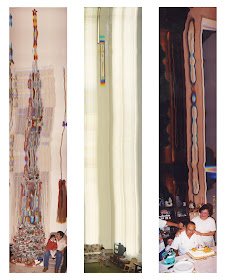 It is clear that not only in these pictures but also in the accompanying video in the O’Quinn Gallery that Justin Zachary is trying to meld the glitches and mishaps of digital processing with the failings of memory, notions of loss, and mortality. He achieves this juxtaposition with varying degrees of success, as the central photograph of his Untitled, Family Photos triptych is far more effective than the two on each side. While the central photograph is oriented horizontally, the flanking pictures Zachary chose look as though they were originally oriented vertically, making the lengthening he’s applied far less dramatic than the one in the middle. The middle photograph eerily conveys the wonder one feels when he is small, when everything in the world feels so much larger than it actually is. Majestic skyscraper windows, glowing in mid-day light, loom large over an oblivious young boy (presumably Zachary) watching TV. 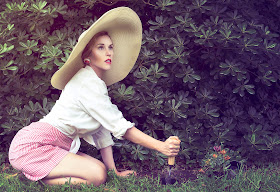 There isn’t a whole lot of new conceptual territory being covered here as Weber seems to be channeling Cindy Sherman in Green Thumb. A beautiful Jessica Lange-esque 1950s starlet gazes longingly afar as she performs her afternoon gardening. But what sets it apart and makes it so seductive is its painterliness: the soft maroon shading of her cheek, the curvaceous shadows of her hat, the almost velvety texture of the leaves behind her, the incisive puncture of her lips. Soft yet sharp, every object big and small commands its own presence and demands tactility. 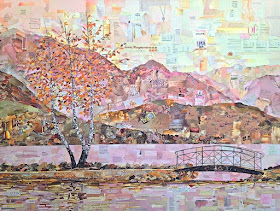 If someone were to describe Sunset on Annecy Lake to me on paper, I would want to rip my eyes out. After all, using fashion magazine cutouts to make a pretty sunset landscape sounds like something a wistful teenager would do. Indeed, there are a few missteps where Scheib is being heavy-handedly critical, pasting phrases like “there’s nothing like rubbing shoulders with a local celebrity.” But on the other hand, Scheib has seamlessly and so carefully blended her color scheme and handled the mountain scape, tree, and bridge with such care, we can look past some of the more obvious bits and pieces that comprise the collage. Tiny people scale the hillside; the entire scene is calming and strangely baroque. We know on some level Scheib is trying to be critical, but in the end we don’t care, preferring instead to be sucked into some dreamy L’Oreal undertow. 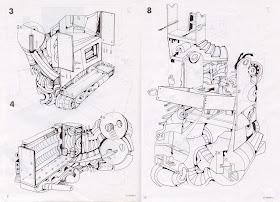 Like some Rube Goldberg cacophonous mess, Ross Irwin draws on top of original instruction manuals, executing his lines convincingly enough to make it difficult to discern where the original manual ends and his inventions begin. There’s no explanation of what these contraptions are—as there shouldn’t be—and we’re left to figure out what they’re doing and why. It would be interesting to see this series carried out in a solo exhibition, to see what one of his machines would look like on a large scale. 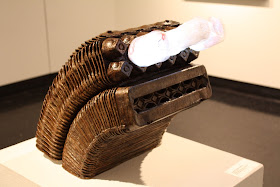 The title is a little literal, but with Detritus 8, Sirinopowongsakorn does a lot with a little. Covered with a shiny, slimy brown hue, the sculpture cranes forward as an emergent head from a pedestal. It’s quietly animated, anthropomorphic and repulsive. It looks like a sewage accordion, or a neutral-faced robot. 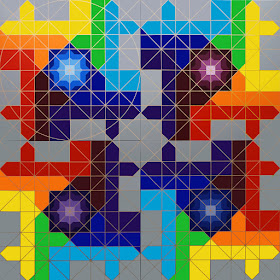 Upon stepping into the John M. O’Quinn Gallery, the viewer’s eye immediately gravitates to Geometry #135-138. The Stella-esque colors, lines, and patterning pop out immediately thanks to a flat, mid-gray background. Abedin forces our eyes continuously in circles through the perimeter of the painting, but also in each of the quadrants she’s delineated, with patterning similar enough to keep it cohesive but dissimilar enough to keep it dynamic. The center of each quadrant looks like pupils in reverse: lavenders and baby blues in the dead center with dark, near-blacks encapsulating them like irises. As the pattering has our eyes swirling circularly, the lighter points have us darting from corner to corner, in an alternating dance of quick steps and slow turns of movement. 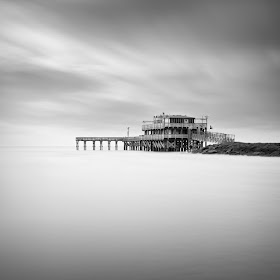 We’ve all seen them: Galveston pics. Galveston at sunset, Pleasure Pier, Pleasure Pier at sunset, the sea wall, the sea wall at sunset. But unlike most of these images attempting to advertise for or glorify Galveston, Fisher’s photograph feels more reserved and tentative. The water is murky and weirdly mystical; there’s barely a horizon line. The white and dark wooden slats of the pier stand in sharp contrast to the water and sky, like a spindly skeleton anchored and levitating in a cloud.