Hey Pan fans--you might remember a post I wrote six years ago about corporate sculpture. One of the things I wrote about at the time was how a large sculpture from 1971 by George Sugarman, called variously the Saint Paul Commission or the Saint Paul Sculptural Complex, had been purchased by commercial real estate firm Grubb & Ellis and dismembered. The firm used the dismembered parts to decorate various office properties it owned in Houston, Austin, and I believe in the Woodlands (north of Houston). (Grubb & Ellis went bankrupt in 2012, so I wonder who now owns all these scraps of Sugarman's sculpture.) Three years later, I happened across a piece of the Sugarman sculpture in Austin. And this morning, as I walked through back streets in Montrose, I found some more pieces of it. 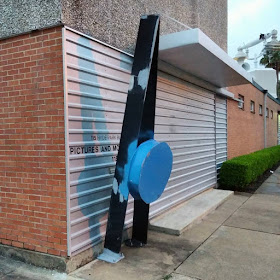 Unlike the other pieces I've seen, these two were not well-maintained or marked with a plaque. The black struts had bits of blue paint from what I assume was an attempt to repaint the circular elements. But they were permanent--they were bolted to the ground. 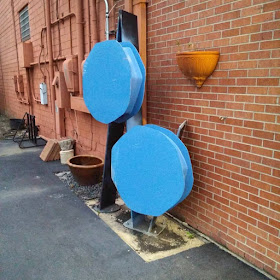 So what did this thing look like when it was installed up in St. Paul? I have found a few photos online. 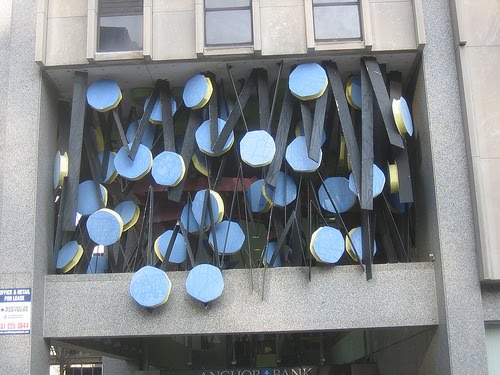 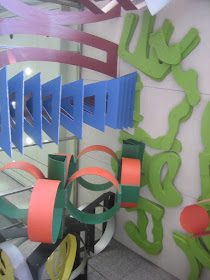 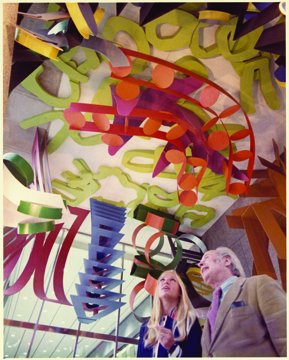 This last photo is quite interesting. It's from the website of Lippincott, a firm that specializes in the fabrication and conservation of large metal sculptures.  The man in the picture is George Sugarman.
Robert Boyd at 7:48 AM 2 comments:
Share

One of Houston's most interesting young artists just passed away. Jed Foronda was only 30 years old. I first saw his work in 2009, right about the time I started this blog. He had two pieces in the Big Show that year at Lawndale. I really liked his work in the show which was made of "excavated magazines" and wood. Here's one of them: 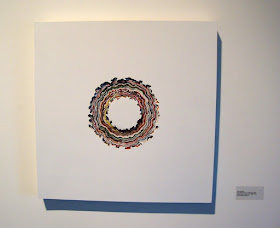 Now in 2009, I was just starting to look at local art seriously. I decided I really liked The Wheels Keep On Spinning so I called up Lawndale and asked if they would pass on a message to Foronda that I was interested in buying it.

When Foronda contacted me, he seemed slightly suspicious. It was as if he didn't really believe I was serious, like maybe I was a scammer of some kind. So he asked me to bring $300 to a Starbucks near the Galleria on a certain day at a certain time. I met him st the Starbucks, handed him fifteen 20s and he gave me Wheel. I hung it in the front hallway of my Mom's house (and she really likes it).

Here are a couple of details of The Wheels Keep On Spinning: 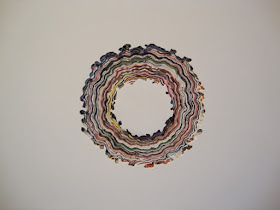 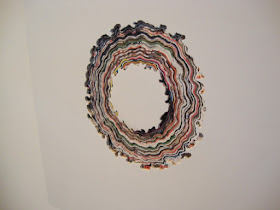 Foronda has occasionally made an appearance in this blog--see this post, this post and this one. Thirty is a cruelly young age for anyone to die. I know Foronda was well-loved by many, and my greatest sympathy goes out to his family and friends.
Robert Boyd at 4:34 PM No comments:
Share
‹
›
Home
View web version