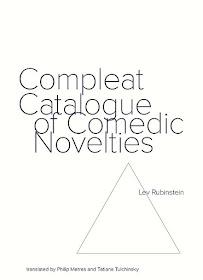 Back in August, I got Lev Rubenstein's Compleat Catalogue of Comedic Novelties

and started reading it. When I bought it, I thought it might be comic stories based on its title (and my lack of research), but it is instead a book of 35 poems. Reading the introduction, I learned he was involved with Moscow Conceptualism, the movement that started in the 70s. The earliest poem here is from 1975. Rubenstein was an unofficial artist during the Soviet period. (This encouraged me to learn a bit more about Moscow Conceptualism before continuing. I wrote about that here.)

The poems are uniformly composed of separate lines which were originally written on separate card (which Rubenstein apparently got from his day job as a librarian). So reading them in a book, all on a page, is a different experience from how they were made. Indeed, they were performed for friends, which is typical of much of the avant garde work of the time. Ilya Kabakov read his albums out loud to friends in his apartment. Andrei Monastyrsky arranged performances in parks and fields or the countryside that only small numbers of invited friends would see and participate in. These strategies were developed in part because the Soviet state remained hostile to unofficial art--performing it for trusted friends was a way to avoid official trouble. But in Rubenstein's case, it affects the way the poems are constructed and read. He remarks, "A pack of cards is a dimensional, spatial object, It is a NON-book, it is the offspring of the 'extra-Gutenbergian' existence of possible culture." And in a society, where books are controlled by a centralized police state, an extra-Gutenbergian existence is called for.

The poems do lean towards the comedic. They are composed of series of sentences, sometimes building on one another, sometimes in dialogue with other lines. Often they build on a repeated phrase or pattern, as in "First It's One Thing, Then Another" from 1985.

First it's too specific.
Then it's too general.
Then neither this nor that.
And on top of that, they peep over your shoulder...

And this goes on for 29 parts in total, each numbered, all following the same basic pattern. Sometimes the subject matter seems slightly paranoid (as in the poem above), but I may be reading my own feelings about the Soviet Union into them. Often they seem to deal with quotidian bits of everyday life. In their format and subject matters, they remind me a little of Joe Brainard's epic I Remember

. But Rubinstein's formats are not quite as rigid as Brainard's, where every line starts exactly the same way.

Rubenstein might not have been thinking of his poems as a book when he wrote them out of separate index cards, but he parodies books in some of them. "Thirty-Five new Pages" from 1981 is just that--35 pages that each contain one footnote, but that are otherwise blank. For example, page 14's footnote says "Here something should be written." Page 33 tells us in a footnote, "Should express the Author's very specific position." Both are especially funny to me because they are adding the notes to blank pages on which nothing is written or expressed. "The Regular Program" from 1975 (the earliest poem in the book) seems to be a primer on how to write an essay--specifically, this essay.


Paragraph One,
Speaks for itself;

Paragraph Twenty-two,
Testifies to the decision of the Author to date the Regular Program: December, 1975;

"Index of Poetry" (1980) is arranged like an index of first lines of poems (without page numbers). They are of course fictitious poems, but by combining these putative lines in this arrangement creates another poetic object all together.

I found this book literally slow going. I'm not a big reader of poetry, and it's hard to get my head around the act. I would read one or two poems then set it down to return to it later. And I think not having a grounding in Russian literary history was a problem--in the afterward, the translators Philip Matres and Tatiana Tulchinsky explain many of the Russian expressions, phrases, puns and allusions in the poems, but explain, "The following notes only gesture toward the enormously complex and allusive nature of Rubinstein's poetic texts."

But despite my shortcomings as a reader, I was often amused by the poems and found it useful in thinking about the absurd and comic nature of conceptual art in Moscow during the waning years of the Soviet empire.