Zine Fest was held on November 17. I wanted to write about my haul, but it's taken longer than I hoped because I just got a new job which has sucked up a lot of my time. But here it is finally--everything I got at Zine Fest from smallest to largest. (I was mostly anchored behind my table where I debuted my new zine, Money, which can be purchased on my online store.) 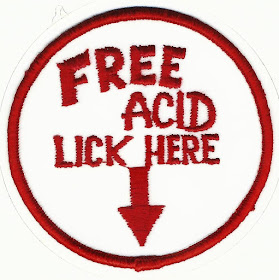 Free Acid Lick Here sticker by Chris Cascio. 3 1/2" square. Chris took a photo of a patch and made a sticker out of it. It fits in with his oeuvre--druggy, nostalgic, low brow. 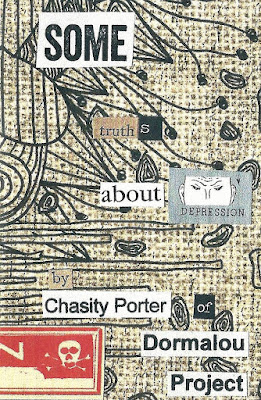 Some Truth About Depression by Chastity Porter (Dormalou Project) One page unfolded, 8 1/2" x 11". 2 1/2" x 4" folded. A collage of thoughts about depression. The words feel a little like a kidnapper's note from a Hollywood film--words cut out and assembled. They are layered over a dense doodle and a brown burlap-looking texture. It looks great but it makes me worried about Chastity. I hope she's not depressed! 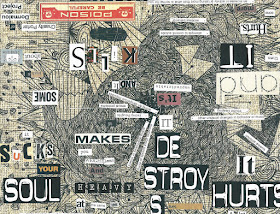 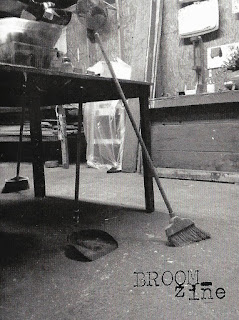 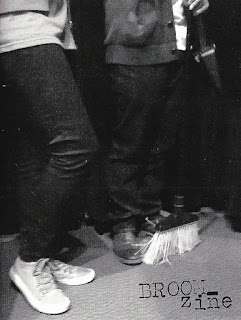 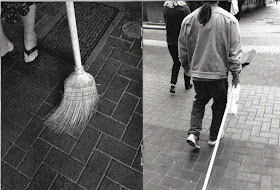 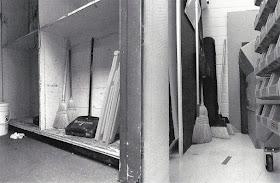 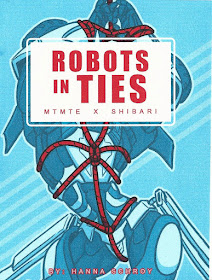 Robots in Ties by Hanna Schroy (published by Elefluff.) 4" x 5". 12 pages, full color. I saw the title and expected pictures of robots wearing ties. But even better--it's robots in bondage! The artist is from Fort Worth. 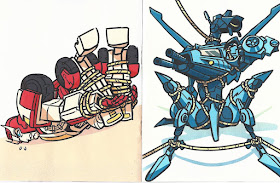 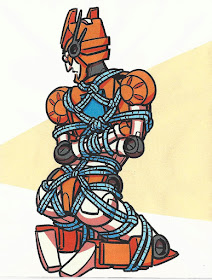 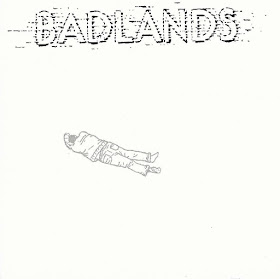 Badlands by Gabriel Martinez (published by Paratext, a collective of artists from Alabama Song). 4 3/4" square. 22 pages, black and white. A very oblique comics story by Alabama Song honcho and former Core Fellow Gabriel Martinez. Set in a trailer park, a bearded man notices a truck parked outside. "This truck's been here all week. Someone movin' out?" he asks his father.

SPOILER ALERT: In the end, we see in kind of an x-ray view that there is a man laying down in the tuck. Is he asleep? Dead? It's not explained and that lack of explanation makes it mysterious and intriguing. If that was the end of the story, it would be a very interesting, ambiguous end. But I asked Martinez and he said there are four more issues to come. 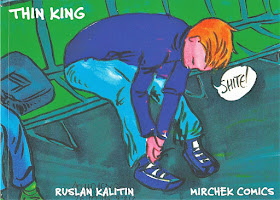 Thin King by Ruslan Kalitan (Mirchek Comics). 8 1/2" x 5 1/2". 26 pages, color. I don't know anything about Ruslan Kalitan, except that I suspect he may be from a country that uses a Cyrillic alphabet. On the Mirchek Comics site, he has this statement:

The comic is a bunch of short disconnected pieces, some having to do with travel. In one page, he writes that many of the stories were "created behind the bar counter of Molly Gwynn's, a pub in Moscow, Russia." I met the artist briefly at the end of zine fest--he came by the table and asked if I wanted to trade publications. He had an accent--Russian, presumably. 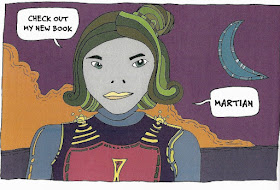 This is the last page of Thin King. 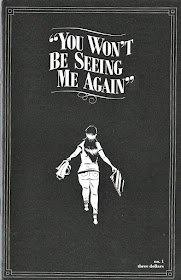 You Won't Be Seeing Me Again by Joe Frontirre. 6 1/2" x 10 1/4". 26 pages, black and white. This comic book has a highly traditional format as might be expected from a Marvel Comics artist like Frontirre. 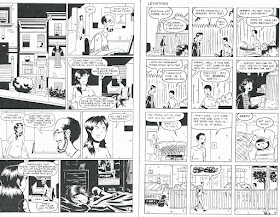 The comic consists of a bunch of loosely connected vignettes drawn in a somewhat cartoony but likable chiaroscuro style. The drawing was why I picked it up--that ink-stained style has been one of my favorites for years. It is said to have been invented by cartoonist Noel Sickles, a newspaper strip cartoonist who shared studio space with Milton Caniff. Caniff basically adapted the style and because his comics were infinitely better than Sickles, he was really the one who popularized it. Since then, many of my favorite cartoonists have used variations of it: Frank Robbins, Alex Toth, Alberto Breccia, José Muñoz, and many others. It was interesting to see it used for such quotidian vignettes of everyday life. If there is a theme here, it is perhaps of various forms of toxic masculinity. I'd enjoy reading more. Unfortunately and unexpectedly, I can find nothing about this comic online so I don't know how you can get a copy if you're interested... 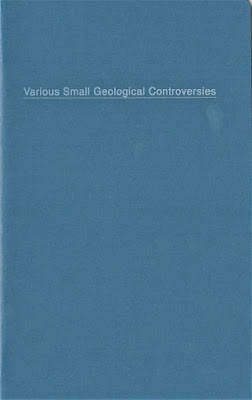 Various Small Geological Controversies by Bill Daniel. 6 1/2" x10 1/2". 40 pages, 3 color risograph printing. Published by Port Aransas Press. Printed by Max Seckel.These pale photos are somewhat overwhelmed by the printing technique. They're printed on a risograph with a really coarse screen. The three colors make each monochrome glow with a particular pink or purplish or greenish hue. The effect is unlike almost any photobook I've ever seen. It looks really cool, especially with these desolate, lonely photos. Bill Daniel, whose photo work I published in EXU, is probably best known for his rock and roll photos. 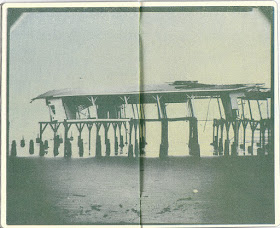 Looking at this, I wonder about the nature of the collaboration between Bill Daniel and New Orleans-based printer Max Seckel. 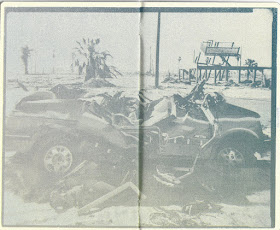 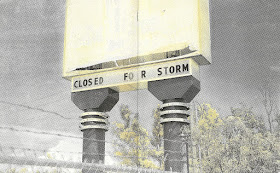 Jazzland by Jamell Tate. 8" x 10 1/2". 36 pages, 3 color risograph. Printed by Max Seckel. Another photobook printed by Seckel. This time the subject matter is a little closer to home. Tate photographed the remains of a New Orleans amusement park called Jazz Land. In 2002, Jazz Land became part of the Six Flags chain of amusement parks, and it was closed down after Katrina in 2005. It has remained shut ever since. 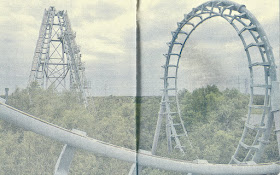 Unlike the Bill Daniel photos, these were color photos. Again the screen used for the color separations is quite coarse, but they were printed in full color (presumably with a four-color separation, but I don't know that for sure--it may be three color seps). The printing makes them appear quite pale. Again, I have to assume that is a conscious decision on the part of the photographer in collaboration with the printer. Like the Daniel book, these images have a lonely somewhat-haunted look (hard to avoid given the subject), but Danial is a more interesting photographer. 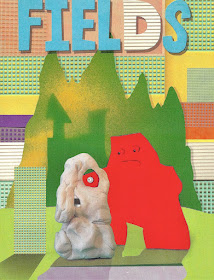 Fields by Brett Hollis. 8" x 10 1/2". 60 pages, full-color. Hollis is another Exu veteran. This slick, shiny publication was published in 2017. It appears to be full of collages onto which captions were placed afterwards. My sense is that he did the collages first and came up with the captions next without knowing in advance what they would be. I may be way off base here, though. 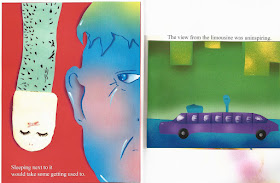 The collages are full of elements that Hollis drew himself, although occasionally they include found images--photos or in one case a piece from a comic book. In the latter, he makes a joke about cutting up the comic in his caption: "The destruction of its relics is the new "American Passtime". Otherwise, the collage elements are drawn and painted presumably by Hollis himself. He uses airbrush a lot in these color-saturated images. 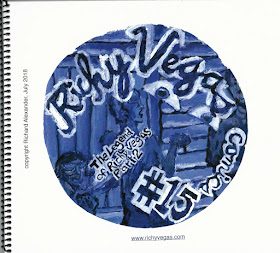 Richy Vegas #15 by Richard Alexander. 12" square, 80 pages. This unusual item is by Richard Alexander, an Austin cartoonist who has been documenting his mental illness in comics drawn on paper plates. To call this comic disjointed would be an understatement, but the cumulative effect is to see that Alexander is someone who in the late 80s and 90s was pursuing various women and working various low-level jobs after getting out of college. 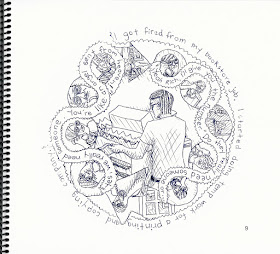 The format doesn't lend itself to clear story-telling, but clarity seems beside the point from the point of view of the author. The story can be summarized very briefly in this statement from Alexander's website: "He attended the University of Texas at Austin and received a Bachelor of Fine Arts there in 1988.  He graduated from the School of Visual Arts in New York City in 1991. In 1992, his quixotic pursuit of the wrong woman lead to a diagnosis of schizophrenia. Three years later, another doctor amended the initial diagnosis to schizoaffective disorder." In the end, it's more interesting for its weird format than for the comics within, but I like the fact that Alexander has obsessively produced 16 volumes of this (over 1000 pages by my count). 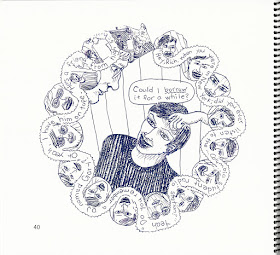