“What is common in all these dreams is obvious. They completely satisfy wishes excited during the day which remain unrealized. They are simply and undisguisedly realizations of wishes.”
Sigmund Freud, The Interpretation of Dreams


I had a dream last week that illustrates this theory.

I was at an art exhibit’s opening night. It was in a non-art space, a large room that seemed like a cheap banquet hall with wood paneling. It was a casual group show as opposed to a curated show. The vibe reminded me of Houston’s great defunct art space, the Joanna, but the space was much larger than the Joanna had been.

There were two huge stone and metal sculptures—they were roughly ovoid-shaped boulders wrapped with bands of a shiny yellowish metal. As I looked at them, I wondered how the organizers transported them into the space. They looked like the weighed tons. I was wondering if the floor was sturdy enough to support them. I walked over to one of them and it disappeared, turning into a energy bar in my hands. Somehow I didn’t question this remarkable transformation and instead unwrapped the energy bar and ate it. But almost instantly I felt guilty for eating the art. Hanging next to the remaining boulder were a couple of crudely made sculptures. One was a model of plane, like a really old Cessna. But it was not perfect—it was kind of rough and lumpy, as if it had been made of papier-mâché. It reminded me a little of Tom Sachs’ work. Brandon Zech was standing nearby and I asked him if he knew who the artist was. He shrugged his shoulders. 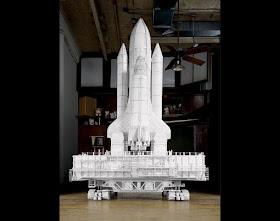 There was a table with a variety of artworks on it. It was a folding banquet table, the kind you might see at a zine festival. And like that kind of table, it was strewn with small objects for sale. Some were three-dimensional, and some were small drawings. One pile attracted my attention. They appeared to be watercolors of faces, mostly of well-known people. They had a savage quality without being out-and-out caricatures. There were several pictures of Ronald Reagan. I wondered who had made them. I looked on the back for a signature and saw only a penciled price. They were all really inexpensive: twenty six dollars and some cents. It was a weirdly specific price and well within my price range.

I decided to buy two Reagans, then I noticed another artist had also painted a Reagan on paper. It was different but also appealing. I decided to buy all three. I explained to someone there that I thought Reagan was worth memorializing because it was his presidency that had started the USA on a dystopian libertarian downward path. By the end of the dream, I had also picked up a video with a Reagan theme. Why was Reagan in my subconscious last night? I don’t know. Then I woke up.
Robert Boyd at 12:51 PM
Share