Robert Boyd's Book Report: It Has Only Just Begun

This book, It Has Only Just Begun, is basically a pamphlet published by Printed Matter. It contains a panel discussion held at the Art Book Fair from 2008. The introduction is by A.A. Bronson, the interviewer is Hans Ulrich Olbrich, and the interview is with Joseph Grigely and Rirkrit Titavanija.

Many of my readers are probably aware of artist Robyn O'Neil. O'Neil is an artist who I think of as a Texas artist, but she's actually from Nebraska and now lives in Washington State. She does large, spare drawings. She is one of the remarkable group of artists who studied at Texas A&M Commerce. She had been a student of the estimable Lee Baxter Davis, who also taught Georganne Deen, Trenton Doyle Hancock, Lawrence Lee, and Gary Panter. I've always found that confluence of art students (obviously over a longish period of time) and one great art professor at an obscure school in a small Texas town to be amazing.

O'Neil has had lots of exhibits in Texas, including a museum show last year at the Fort Worth Modern. I didn't see it, which I regret. But she did have a solo exhibit through Deasil (the roving successor to one of my favorite galleries, Art Palace) in 2018 in Houston, which I did see and which I loved. As you can see if you click through, one of O'Neil's subjects is rough-hewn headstones. 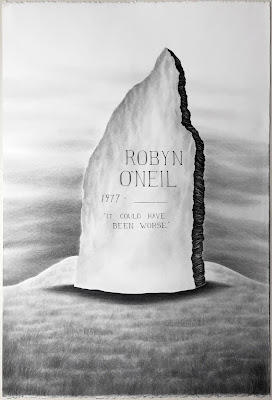 Robyn O'Neill, It Could Have Been Worse, graphite on paper, 2013 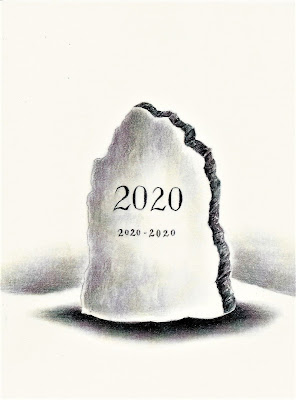 She said that she had turned it into cards which one could order from her website, so I went to her website and ordered two.

It was there that I discovered she does a book podcast called Me Reading Stuff. She refers to her podcast as "show and tell." She doesn't so much as describe or judge the works she's reading as just read them with a little bit of introduction. She talks a lot about her own day to day life as well. It's weirdly compelling, and she does a really good job of it. She mostly reads poems but occasionally reads prose pieces. I've been dipping into it for the past couple of days.

You can see why I would be interested in this given my own recent project of doing "book reports". But as far as I can tell, she's been doing it since 2015 and has done hundreds of them. She has a smooth delivery that I envy. (In general, when I listen to podcasts, I am always envious of podcasters smooth, unruffled deliveries. Anyone who watches one of my book reports gets to see me stumble on words, mispronounce names, and fruitlessly search for the right word...) And it's not smooth like a newscaster--it always comes off as if she was a friend talking to you on the phone about some poem she liked--it's personal and warm.

I sent her a note saying how I liked that she, a visual artist, had this obvious affinity for a totally different art form and how that kind of cross-medium linkage seemed rare in the local art scene. (Which might be an unfair judgment on my part--maybe those linkages exist, but I just don't see them.) And she wrote back the following:

AMEN!!! Yeah there are a number of my Heroes who adhere to the notion of researching outside your own field. It’s just more powerful that way. If someone asked me to do an art podcast with them (and they have), I say that I have zero interest. A food podcast? Sure! An accounting podcast-ok! But art? Nope. I can’t wait to check your book reports!! Thank you for subscribing to the podcast-it’s my real love.

Today I look at a horror manga called Museum of Terror, Vol. 1

by Junji Ito. I also mention his classic book Uzumaki

as well as Mark Danieleski's horror novel, House of Leaves

It's not a report about the magazine Artforum, but about the book of short stories by César Aira called Artforum

. It did prompt me to reflect on Artforum the magazine a little and on the Ruth Benzacar gallery, which is mentioned in the review.

My book report is about Time of the Magicians: Wittgenstein, Benjamin, Cassirer, Heidegger, and the Decade That Reinvented Philosophy

by Wolfram Eilenberger. It's my longest report, and it was the hardest book I've read since COVID-19 started.

This week I am reporting on The Art of Resistance: My Four Years in the French Underground: A Memoir

by Justus Rosenberg. I really go on at length about it, so I guess, Spoiler Alert!

Today I review another book that is mostly pictures, Alice Neel: Painted Truths

. As far as I can tell, I've only mentioned Alice Neel once before on this blog. But I have written about Gregory Battcock.And of course, I did a book report on Frank O'Hara's Meditations in an Emergency