A little over a year ago, I started writing about art in Houston regularly. My reason was to use writing as an excuse to get out of the house and see art. I was becoming too much of a couch potato, see? I always went to see museum shows and whatever was happening at Diverse Works, but I wasn't going to galleries or seeing much of what was happening at the other great art spaces in Houston.

Consequently, when I saw The Big Show last year, it was with virgin eyes, so to speak. Here was a show that, in a way, captured a moment of a regional scene about which I knew nothing. So I was completely unfamiliar with the artists being shown.

Obviously this year is different. While there were still plenty of artists in the Big Show I didn't know, but this time around, I was familiar with a lot of them.

This got me thinking about curating a show like this. The concept behind The Big Show is that anyone can enter (as long as they are from the area and pay the entry fee), and some outside curator is the juror. In this case, Paul Middendorf from galleryHOMELAND in Portland. OR. He helicopters in, looks at a bunch of art, and picks some. Compare this to what a curator usually does. She has an idea--either a unifying concept or an artist whose work she is interested in or some combination. When she picks artists, she does so because she is aware of what they have done in the past. For her, the work in the show she curates has a kind of context based on her knowledge of the artists in the show.

Middendorf, on the other hand, had no idea where the artists he picked were coming from. Was a given piece that he chose the culmination of some process for an artist? Or was it a one-off? Last year, as a viewer, I was in the same circumstance as the juror. These pieces were, for me, without context (aside from the context of the show itself). This time, I have specific knowledge of some of the artists (I even own pieces by a three of them), and a more general knowledge of the scene they represent. And that made viewing the show a really different experience in 2010 than it was in 2009. 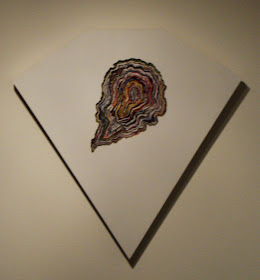 Jed Foronda is one of the artists in this year's show who was also in last year's. I really liked his pieces in last year's Big Show. So much so that I bought one, The Wheels Keep on Spinning. The pieces from last year resemble this piece--they all use "excavated magazines" as part of the content. What Foronda does is to take a magazine and carve on subsequent pages more-or-less concentric shapes, which leave the magazine looking a little like a terraced open-pit mine. It is then mounted behind a white wood panel which itself has a shape cut out of it that is concentric with the cut out parts of the magazine. Last year's works were highly symmetric. The pictures were perfectly square, and the excavations were more-or-less circular. This year, the picture has a less regular shape (although it is still bilaterally symmetric), and the excavation doesn't even attempt to be regular. The work is inherently more dynamic.

Between last year's big show and this year's, I had seen no Foronda work--not in any group shows or at any galleries. But apparently he spent at least some of that time developing his excavation ideas. (But he was also drawing--see the two drawings he donated to Box 13 for their raffle.) While the basic concept remains the same, this Excavation #15 feels like a stronger piece than the earlier ones. He has extended the vocabulary of the technique he developed. I'm impressed.

I don't have last year's catalog, but I noticed a few "repeat" artists. There was another provocation by John Runnels (last year, it was the word "fuck", this year, it's lots of naked ladies), and more sickeningly realistic sculptures of mold by Jasmyne Graybill.

But more than repeat artists (there are probably many more than the three I've mentioned) are artists whose work has been seen in other venues. There is a sense that The Big Show is for "emerging" artists. But the rules state anyone can enter, so it's not surprising therefore that some more established artists have done so. 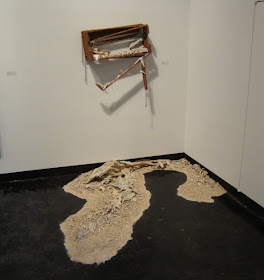 This compelling portrait of decay by Jeff Forster was displayed at Poissant Gallery earlier this year. He's also one of the artists whose work I won at the Box 13 raffle. 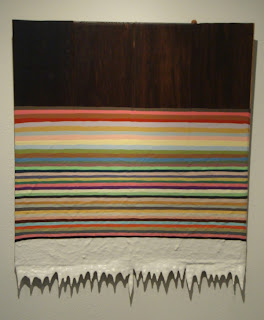 Joseph Cohen, Proposition 113B, reclaimed latex and latex on walnut, 2009 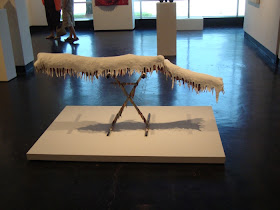 Cohen's work has been shown at Wade Wilson. He's one of my favorite artists in Houston, and his work definitely stood out in the context of this show--it was simultaneously assured and daring. His paintings are inherently sculptural, and here he took the next step and displayed a painted sculpture. The work is about waist high, and it has--like his paintings--the drippy plastic look. Given the reclaimed and modest materials he uses, and the sculptural way he uses paint, I am reminded both of early Jasper Johns and Robert Rauschenberg. 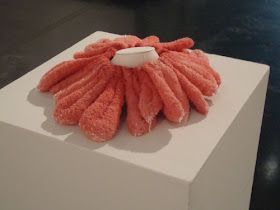 Weiks had work in the group show Not the Family Jewels earlier this year. She seems to be part of the fine art/craft nexus that is happening in art right now. (See the current show at CAMH, for example.) This necklace is both cute and slightly disgusting at the same time.

Several other pieces in the show also demonstrated exceptional craftsmanship. A pair of pieces that really wowed people were by Catherine Winkler Rayroud. 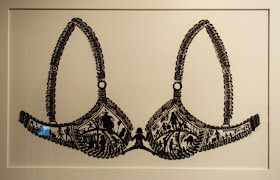 Catherine Winkler Rayroud, Women's Liberation? What Liberation, papercutting made in one piece with nail scissors, 2008 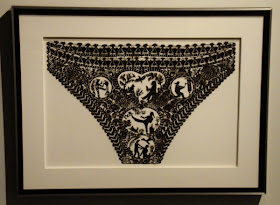 Catherine Winkler Rayroud, Set Yourself Free!, papercutting made in one piece with nail scissors, 2008 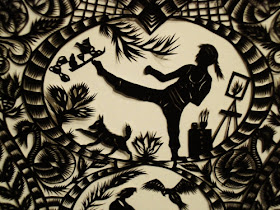 Catherine Winkler Rayroud, Set Yourself Free! detail, papercutting made in one piece with nail scissors, 2008 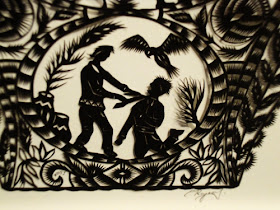 Catherine Winkler Rayroud, Set Yourself Free! detail, papercutting made in one piece with nail scissors, 2008

Rayroud is engaging in a strategy that, by now, is traditional in some streams of feminist art--she is using craft to deal with feminist themes. Specifically a craft that is typically associated with women. This strategy allows the work to operate on two levels. First, the content of the work (silhouette depictions of lace underwear, with feminist vignettes within the lace). Second, the medium, by being a craft associated with women, challenges the (male-defined) concept of what is art (painting, sculpture, architecture) and what is craft. Had this work been done in 1970, it would have been a revolutionary challenge to old hierarchies. But the old academic definitions of what is art and what is not has been pretty thoroughly demolished by now (with the help of feminist art). The pieces come off, in a way, as nostalgic. But they are beautiful, and there's nothing wrong with nostalgia.

But there's an irony in these pieces being in this show, because one thing you can definitely say about this Big Show--it has a lot of naked ladies. 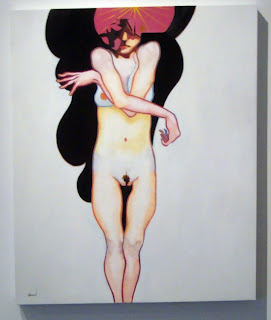 Some were elegant. Some were absurd. 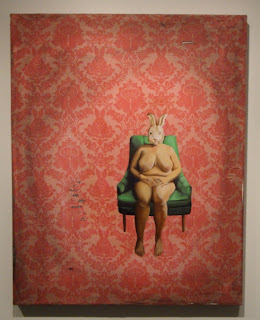 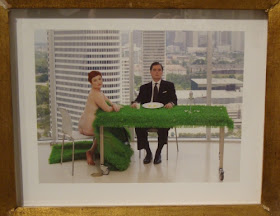 This piece is a headscratcher for me. It is an image that holds you, certainly. It's a classic sexist situation in art--naked woman with clothed man. It is hard to construct a mental narrative that matches what is in this photo. They appear to be on a high floor in a highrise building (presumably near Buffalo Speedway, although not at 3333 Buffalo Speedway--there doesn't appear to be a highrise there). The astroturf on the table is mysterious. He appears to be about to eat, and both are looking at the photographer with bland, neutral expressions. What about the photographer? Maybe if I could see some more of his (her?) work, I'd understand the piece better. Context, remember.

But K. Eisenbeiss seems to have no web presence. The "K." part carefully hides the photographer's gender. "Eisenbeiss" means "hot iron" in German. (That helps a lot. Not.)

There are several other naked or semi-naked ladies in the show. I wonder if someone took Paul Middendorf to Treasures while he was in town...