The current show at Anya Tish almost makes sense. You get kitschy irony with Wesley Harvey's ceramics, mixed with the sugar overload of Ann Wood's assemblages, the poster-colored cuteness of Mindy Kober's gouaches and the cartoony figures in Jennifer Nuttall's pieces. Dawn Black seems to  be the odd artist out, to my eye. What really links these artists is that they all have achieved a certain level of local prominence in the world of non-profit artspaces like Lawndale and Box 13. The show was curated by Nuttall, but if one thinks of it from Tish's perspective, for her, as for any gallerist, taking on a new artist is a risk. A group show hedges but does not eliminate that risk. So achievement in other arenas may help a gallerist decide which risk to take. Of course, this has nothing to do with the quality of the exhibit. But as regular readers know, I like to think about the economics and sociology of visual art.

In fact, the show is pretty good. I first saw Mindy Kober's work at The Big Show last year. In that show, she had a witty piece showing a group of school children observing (being menaced?) by large floating Russian Supremacist abstract shapes. Her drawing style, outlines with flat colors and minimal details recalls old children's books, and because of that likewise recalls the absurdist cartoons of the great Glen Baxter. That approach is carried over into this show. 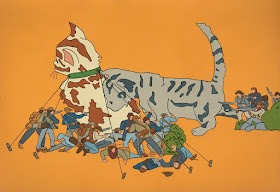 A group of Civil War-era soldiers are fighting around two gigantic kittens, one collared and immobile, the other nosing around with curiosity. The soldiers don't appear to be Union vs. Confederacy--their uniforms are all mixed up. And the "landscape" they occupy is a flat mustard-colored field. The lilliputian men, the kittens, the flat colors all scream "aw cute," a feeling only slightly mitigated by the four dead or wounded soldiers in the picture.

But her strongest drawing is Undertow, for which I don't have a reproduction. It's another gouache, but much larger--60 x 90". It's an ocean scene with the horizon at about the middle of the page. But don't let the fact that there is a horizon fool you into thinking there is a comprehensible space here. Scale is less important that fitting all the elements in--elements that relate to the ocean. So you have modern swimmers and beach-goers mixed in with Poseidon and Triton, as well as a couple of battling Patrick-O'Brian-style wooden ships. All done in Kober's simplified, story-book outline style.It's my favorite piece from this show.

Ann Wood's pieces are sculptural assemblages made with hunting decoys. (Elaine Bradford has been using decoys in her art recently as well--does that mean it's a trend?) In both her pieces, Scream and Bitter Sweet, the decoys are covered with gooey, almost edible-looking foam. 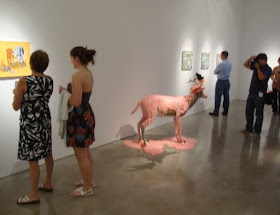 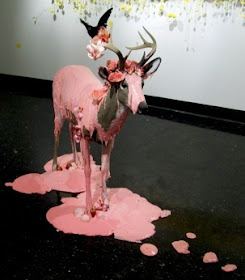 It looks as if the pieces were actually assembled there in the gallery, with the foam poured onto the floor. The bright pink foam in Scream--well, it screams at you. It's the first thing you notice in the room. It feels so artificial, so plastic and fake. It's both amusing and disturbing that a deer is coated with it. One could read this as a conflict between a more natural state of things and a highly artificial state. It could have an environmental interpretation. But I think it's key that the pink is really appealing. It might be a crime against nature to cover a deer in pink chemical foam, but it looks really cool. 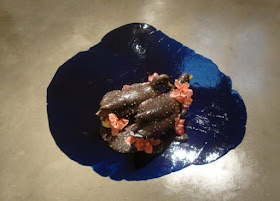 I think the theme is a little more obvious in this one--bird coated with a nasty dark substance. Seems as if that has been in the news a bit lately. But that is undermined a bit by the fact that the duck is also covered with little colored dots--it looks like it has been dipped in chocolate and covered with sprinkles. Rather than being a victim of BP, it looks like a creation of Krispy Kreme. We have nature under assault, but looking sugar-sweet.

Wesley Harvey also employs cuteness in his work. Harvey teaches art in San Antonio. Like many adjunct professors, he works for multiple schools, including the Southwest School of Art and Craft (Gary Schott also teaches there). His work in this show is ironic and kitschy. 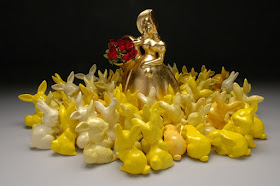 But the irony is not subversive. I don't think that's his goal. Far from undermining the saccharine nature of his subjects, Harvey seems to be ramping that aspect up. Looking at And all the yellow bunnies is like eating a pound of chocolate Easter eggs.


Jennifer Nuttall also plays with irony, but hers seems the least interesting. Smiley cartoon figures trapped in bureaucratic political nightmares. Her figures have faces that look like those of 80s punk cartoonist Krystine Kryttre. 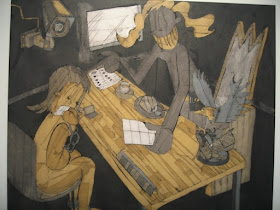 My problem with these pieces is that the approach Nuttall takes doesn't particularly serve her political message very well. In particular, she undercuts it with the cuteness of the characters. It's unfair of me, but I want to political art to have the power of Jacques-Louis David and the moral clarity and inclusion of the viewer of Hans Haacke. 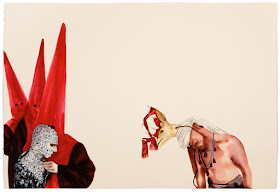 Dawn Black, The Snake and the Rising of the Stag, goauche, ink, watercolor on paper, 2010

Dawn Black doesn't trade in irony like the rest. Her mysterious, haunting figures in their indistinct, empty spaces are both specific and dreamlike at the same time. Pictures contain hints of rituals, bizarre performances, illicit activities, etc., without being specific about what these activities might signify. Especially interesting and intriguing is the "Conceal Series," small color drawings of masked people--a huge variety of people wearing a huge variety of masks. 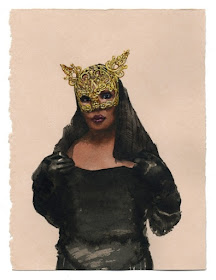 The outfits of these figures may conceal, but they also reveal quite a bit about the character (and possibly the obsessions) of the subjects. Black's skilled drawing of clothed figures, along with a flair for the mysterious, is what makes all this work.
Robert Boyd at 7:52 PM
Share