In the first installment of my review of The Big Show, I suggested that for a change, painting wasn't the overwhelmingly dominant medium. So if painting is down for the year, was there a category or type of art that was up? Yes. Craft-based art was unusually well-repesented. Usually when you see craft in an art context, it carries along a conceptual underpinning that makes it acceptable within this context. You don't see much craft qua craft, craft judged primarily on its beauty and the skill of its execution. At least, you don't see it in venues like Lawndale. 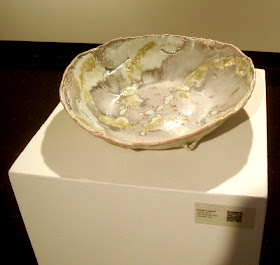 So it is kind of exciting that juror Marco Antonini made a point of including beautiful and intriguing pieces like Textile by Rosalind Speed. The grey and greenish colors are produced by iron in the clay through the gas reduction method. This effect, combined with the rough-hewn shape give Textile an unusually organic appearance. Speed isn't using ceramic techniques to tell us some other story--the ceramic techniques she uses are the whole point here. 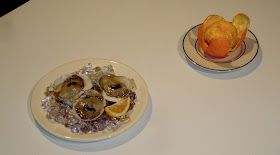 When the artists were announced for the show, Henri Gadbois jumped out as one of the most surprising and pleasing inclusions. I'm sure he is the oldest artist in the show--Gadbois was born in 1930. He is someone who was prominent in the Houston art scene in the 1950s. I was primarily aware of him as a painter, but he has also been a ceramicist since his high school days. And it turns out he has a business, Faux Foods, making hyper-realistic ceramic foods. With these two pieces, Gadbois is showing not only his earthenware food, but by using resin and acrylic, he adds an additional layer of realism. They almost seem decadent, items delivered by room-service to a hotel suite occupied by two lovers. They are quite sensuous. And for me, they represent a link to the art history of Houston, something that is fitfully acknowledged locally. (If you want to know more about Houston's art history, see this video lecture by painter Richard Stout, this online book of interviews by Sarah Reynolds, and this timeline by Caroline Huber and The Art Guys.) 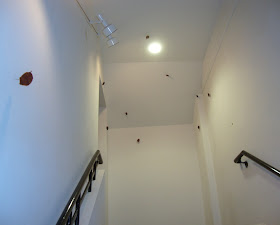 Matthew Glover, Now Is When I Wish It Was Autumn, 2012, knitted leaves

Matthew Glover knitted a small leaf storm for his installation Now Is When I Wish It Was Autumn in the stairwell between the first floor and the mezzanine. His previous work that I've seen was also knitted--large high-contrast black and white nudes. I mentioned the two fuzzy classes of craft--craft with some conceptual underpinning and craft qua craft. I don't want these artists to be stuck in these essentializing categories, but Glover definitely leans towards the conceptual side of the ledger. The myth of autumn is red leaves, brisk breezes and knit sweaters. Autumn in New England is the platonic ideal of the season. (And as a former resident of rural Massachusetts, autumn is what I miss most.) This ideal is a joke in Houston, where autumn is best characterized as a brief lessening of the volcanic heat of summer. In college, I had a leafy tree outside my dorm room. One November morning, I woke up to find that every single leaf had fallen off it overnight. My roommate turned to me and said, "Autumn's here." It wasn't exactly "Autumn Leaves." So Glover, using one signifier of autumn (warm wool clothes) simulates another signifier of autumn (beautiful red leaves). The result is beautiful, but for the full New England effect, he'd need a lot more leaves--and different varieties, too. 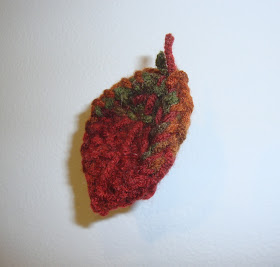 Matthew Glover, Now Is When I Wish It Was Autumn, 2012, knitted leaves 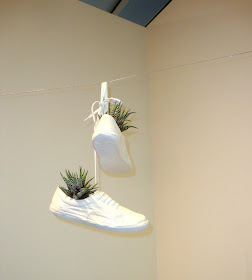 I think everyone who saw Wyatt John Little's Urban Flower Pot was delighted by it. No doubt not a few coveted it for their own hanging plants. This icon of urbanity--shoes tied together like a bolo, hanging from a power line--goes from eyesore to object of beauty here. The ceramic shoes are beautifully made, and each is perfectly balanced so that the plant is facing up. Wyatt John Little had another piece in the show (a collaboration with Julie Lundgren)--a sculptural object made from cast soap. So both his pieces are in media associated with craft, and both are witty and beautiful.

Mari Omori's Time Machine is a collection of little geometric soap carvings in the center of shallow ceramic platter. The soap carvings have soft edges, the colors are off-white on white, and the entire piece is quite small. It's cute and clean. Omori has done other soap carvings which she calls soapworks. These parallel other series of works--teaworks and saltworks. These are substances that are simultaneously mundane and elemental. With Time Machine, the shapes recall weathered architecture from the deep past. One object appears to be an obelisk, which could be any number of Egyptian obelisks. Another resamples a specific object--the bent pyramid of Snefru. Assuming all the carvings represent ancient stone structures, the meaning of the title, Time Machine, becomes more clear. 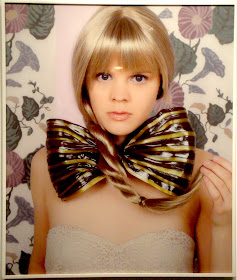 Celia Butler is a former resident at the Houston Center for Contemporary Craft, and she uses sugar pulling, a technique that allows one to create sculptural forms from sugar, to create bows such as the one in Sugar Gazing. This photo, like many more on her website, depict a young woman (I think only one woman, sometimes wearing a wig), wearing a bow made of sugar, either on her neck or in her hair. The photos have the feel of fashion photos--the lighting is professional, the model has a blank, compliant expression and is heavily made up, staring directly at the viewer. Except for the bizarre sugar bows, one wouldn't be surprised to see these photos in an ad or clothes catalog. But the sugar bows are a completely bizarre element, reminding the viewer that she is looking at something deeply strange. The title tells us that this image is for gazing at (and we feel like we are being gazed at). There is an association between sweet and sexually desirable (one might call a lover "sweetie" or "sugar"). And fashion is like candy--something one might crave and never really have enough of. For these and other reasons, there is something about this photo that puts the viewer off-balance. It's funny and slightly creepy. It has an insinuating beauty that sticks with you.

If you took all the craft-based pieces out of The Big Show and made a separate show consisting of them solely, it would be a completely fascinating show. I wonder if Marco Antonini was thinking this as he chose these pieces. He knew he wasn't going to be able to create a unified exhibit--The Big Show is too diverse to permit that. But within the exhibit, perhaps, are several other excellent exhibits that can be put together--curated--in the viewer's mind.